Don McLoud
Jan 2, 2023
Dynapac unveiled one of its new models of highway pavers, the D30T, at World of Asphalt with a patriotic design to mark the paver's production in the U.S. after moving from China.
Dynapac

Manufacturers of roadbuilding equipment showed in 2022 that compact earthmoving equipment is not the only player in battery-electric innovations.

The year also saw new pavers from Vogele, Cat and Dynapac, as well as compact cold planers from Wirtgen and BOMAG. A new app to help contractors forecast the price of asphalt and a robotic crack-sealer also advanced technology for the industry.

Here are the top roadbuilding products of 2022 as chosen by Equipment World editors.

Dynapac introduced the world’s first emissions-free battery-powered asphalt compactor more than a decade ago. The company announced in 2022 it is ready to bring two electric tandem-drum vibratory compactor models to market, including in the United States. It launched limited editions of its new Z.ERA CC900 e and CC1000 e rollers in 2022, with full-scale production set for 2023.

Hamm launched eight fully electric tandem asphalt compactors for its HD CompactLine series at Bauma 2022. The company says the new battery-powered rollers will have the same operation and compaction performance as the coinciding diesel-powered models. The models’ lithium-ion batteries will also be able to run on a single charge “for an entire typical work day.” The 23 kWh battery is designed to be maintenance free and delivers 48 volts of onboard power.

GOMACO showed the world the first battery-powered curb and gutter slipform paver at World of Concrete 2022. The prototype CC-1200e is based on the company’s diesel-powered CC-1200 Curb Cadet. It runs on a 48-volt, direct-current lithium-ion battery pack. The machine functions are electronic over hydraulics, so elevation sensors and steering are still run by hydraulic valves.

Dynapac rolled out a new line of highway class pavers for the North American market (photo at top of story). The pavers have been completely redesigned and are being built at the company’s plant in South Carolina. The line marks another first for the company, which was previously building the pavers for the U.S. market in China. The 10-foot tracked D30T joins three other new models: the 10-foot wheeled D30W, the 8-foot tracked D25T and the 8-foot wheeled D25W. The company also rolled out new screeds: the 8- to 16-foot Mat Master 16R and 10- to 20-foot Mat Master 20R. The pavers and screeds are designed for high-speed paving of thin or thick layers of asphalt and can be used on highway jobs, new construction or large commercial projects.

Vögele rolled out its next generation of asphalt pavers at Bauma 2022. The company’s new Dash 5 pavers include the Super 1900-5(i) and Super 2100-5(i) highway-class models. The machines have flexible, modular designs for easier use and to save on costs, the company says. More automated functions as well as more features to reduce environmental impact have been added. The company says the new models are easier for paving crews to handle and operate as well as improve safety. The Vögele models also have a quicker setup time.

For simplified setup of similar paving projects, Caterpillar has added a new pave start assistant on its large asphalt pavers. The system, which debuted at World of Asphalt, is available on the new Cat AP600, AP655, AP1000 and AP1055 asphalt pavers. The upgraded pavers also feature Cat's new nomenclature, which drops the letter after the model number. The pavers also get new screeds: SE50 V, SE50 VT, SE60 V, SE60 V XW or SE60 VT XW. Pave start assistant records the functioning conditions of both the paver and screed, including paving width, paving speed and tow-point position, which then can be resumed by operators when needed.

Wirtgen designed its new W 120 Fi cold milling machine to be operated by one person and packed it with much of the automated technology from its large F Series models to make it easier for inexperienced operators, the company says. It also marks the first Wirtgen cold planer with a John Deere engine since Deere acquired Wirtgen in 2017. The cold planer has a 4-foot milling width and 13-inch cutting depth, primarily for use on parking lots, driveways, pathways or as a tie-in machine on road projects. It is designed to be maneuverable in tight spaces, such as curbs and parking lot islands.

BOMAG designed its new BM 2200/65 half-lane cold planer to be light and compact for greater maneuverability and easier transport. With a 58-inch milling radius, the planer can handle such tasks as small roundabouts and cul-de-sacs. It can be used on a wide range of milling jobs, BOMAG says, thanks to various drum designs and a choice of three rotor speeds. It weighs 60,296 pounds and runs on a 630-horsepower Cummins Tier 4 Final engine.

A robotic sealcoat vehicle has hit the market that automatically finds and seals cracks and only uses two workers. The CrackPro Robotic Maintenance Vehicle is the result of a partnership between SealMaster and Pioneer Industrial Systems, whose president, Todd Hendricks, invented the concept. He said he got the idea in 2019 after watching a crack seal crew and thought there should be a safer, more efficient way. The company then set up its RMV division and reached out to SealMaster.

A former executive for a large highway and heavy construction company has created an app that predicts the price of liquid asphalt for up to 18 months to help contractors bidding on projects. Brian Lawrence developed The Asphalt App, which is based on a proprietary algorithm that incorporates daily closing prices of a variety of energy products when making its predictions. Lawrence is the owner, president and CEO of Asphalt Unlimited.

Trimble released its Roadworks Paving Control Platform for Asphalt Compactors, a system designed to accurately control the compaction process while reducing unnecessary passes. With it you can view compaction progress, pass counts and mat temps on a color display. You can monitor pass counts only or pass counts plus temperature, add temperature sensors or precision accuracy and wirelessly transfer intelligent compaction data from the machine to the office.

LITTLE HELPERS ON THE JOB

Mauldin’s M415XT is designed to give small paving contractors a lot of what they need on the jobsite without having to buy separate machines. Called “The Maintainer,” its main design is a small motor grader, but with its 10-foot boom height, and high-flow hydraulic quick-attach capability on the front and rear, it can also act as a compact loader, as well as perform a variety of other jobs, such as sweeping, compacting, loading – whatever kind of attachment you want to run, the company says.

Contractors can turn their skid steer into a paver to patch and pave roads, pathways, bicycle tracks, parking lots, driveways and utility trenches with the new Mazio skid-steer-mounted Skid Paver. The attachment, which can be installed on any type of ISO 24410 skid steer loader, has a 1.5-cubic-yard hopper capacity, a paving width of up to 6.2 feet and a paving speed of 82 feet per minute. It can lay down hot or cold mix asphalt in thicknesses of 2 to 10 inches, while a liquid propane gas heater keeps the material heated to 284 degrees Fahrenheit.

FAE is launching three new skid steer and compact track loader attachments for shredding or cutting through asphalt and concrete roads. The RPL/SSL and RPM/SSL shredders are based on similar technology as cold planers. Teeth attached to a rotor scrape and cut to prepare a surface for a new layer of asphalt or concrete. They can also be used for excavation operations. The company is also launching an RWM/SSL model that uses a disc rotor for targeted excavations on asphalt and concrete surfaces for such tasks as laying utility lines.

For maneuvering urban and residential jobsites with limited space, Liebherr debuted its smallest truck-mounted concrete city pump at World of Concrete 2022. The 158-gallon THP 80-LP offers many of the same features as its larger heavyweight truck-mounted boom pumps. And as an added benefit, the 22,684-pound boomless pump, which is mounted on a two-axle Navistar chassis with an automatic transmission, does not require a CDL to operate. 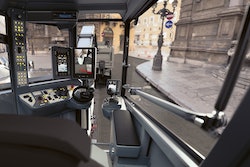 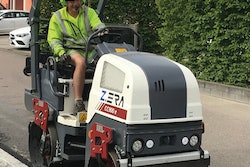 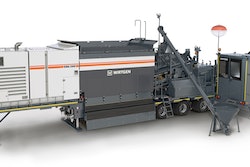