The Biggest Construction Equipment Stories of 2020

Well, we’ve just about made it. 2020 is almost over and despite the weight and tragedy of a pandemic and the stress of an election, we’re just about on the other side of a very tumultuous year.

Through it all, it’s been pretty amazing to see the determination and resiliency within the construction and construction equipment industries. Throughout the year we’ve been in close contact with both contractors and equipment manufacturers and though the work they do is different, their end goal is the same: keep their people employed and safe and make a great product.

And in that way 2020 has been pretty inspiring. So let’s take a look back at the top construction equipment stories for 2020 and look forward to seeing these machines hard at work in 2021.

Probably the biggest story of the year in equipment was Cat’s all-new dozer lineup. Now, the first of the new dozers, the new D6 and D6XE were actually unveiled back in 2018, followed by the new D5 came in 2019. But the bulk of this lineup was unveiled in 2020 with the introductions of the new D1, D2, D3, D4, D7 and D9 all coming this year.

Beyond being next generation machines with a host of improvements, the other big piece of this lineup is that the model names have all completely changed.

Thanks to a new nomenclature standard Cat is using across all of its machines, the Cat team rethought the way it names dozers, specifically it has gotten rid of letter modifiers in model names, instead offering one model per size class.

By the way, the XE in D6XE still follows this new convention even with the extra letters. That XE designates a premium configuration, not a wholly different model.

By and large, all of the new Cat dozers added a bit of weight and power with these new models over the machines they’re replacing. Plus, the new dozers feature a redesigned cab and an increased focus on grade control technology.

We learned just a few weeks that Hyundai and Doosan Group have agreed to a deal that will see Hyundai buy Doosan Group’s construction equipment division, Doosan Infracore.

All the way back in June, rumors starting floating that Doosan Group, was exploring the sale of its Doosan Infracore division. That’s the division that currently houses both its own brand of Doosan construction equipment (the line formed through the acquisition of Daewoo back in the day) and the U.S.-based Bobcat equipment line.

The move was reportedly in play so that Doosan Group could salvage another of its subsidiaries, the debt-ridden Doosan Heavy Industries & Construction. That division was acquired by Doosan Group in 2001, provides power generation and includes engineering and construction services in Doosan’s home country of South Korea.

In September, reports started circulating that Hyundai was the top bidder. However, it was also being reported that Doosan wasn’t including Bobcat in this sale. Making this possible is that even though Bobcat and Doosan are both housed in the Doosan Infracore subsidiary of Doosan Group, they have operated as independent businesses since 2018.

Then in December, Doosan confirmed to Equipment World that there was an agreement in place for Hyundai to buy a controlling 36 percent stake in Doosan Infracore.

And reports surrounding the agreement confirm that Bobcat is not part of the deal.

Reports surrounding the deal peg it at somewhere between $640 to $735 million, although other media reports said it would be close to $900 million.

Another huge story in 2020 has been the buzz around a new category of equipment: compact dozer loaders.

Both Case and John Deere unveiled their own compact dozer loader configurations at ConExpo 2020 back in March. While the Deere is a true hybrid machine, equal parts CTL and dozer, the Case DL550B is engineered more around dozing—specifically replacing a small dozer in your fleet.

At the core of the DL550B is a very large CTL with a 114 hp engine and a rated operating capacity of 5,500 pounds. Having that size is important. But so is stout hardware and to that end the DL550B has been outfitted with a chassis-integrated C-frame for pinning on a 6-way dozer blade.

Plus, the DL550B has a true dozer undercarriage with the same rolling components—the rollers, chains, and grousers—that are found on the actual 650M dozer.

The Deere 333G with SmartGrade takes a different approach. At its base is a smaller CTL with a 3,700 pound ROC, but with integrated 3D grade control and a blade built specifically for this model.

The differences in the models reveal a difference in philosophy for this machine type. Case designed a machine that could replace a dozer, while Deere built one focused on accuracy above anything else that still didn’t sacrifice the nimblenesss and versatility of a rubber track CTL.

It’s an interesting new category with a lot of buzz and it will definitely be interesting to see how this new segment shakes out.

To read more about the 333G with SmartGrade, click here.

Moving from one crossover machine type to a company that is pretty much building itself around that concept, another huge story in 2020 has been French company Mecalac.

This year Mecalac introduced three different machines that kind of blur the lines between machine types.

First is the new MCR Series which Mecalac calls a “skid-excavator.”

The standout feature of skid-excavators is their signature side boom, which has been designed to be used with excavator buckets and skid steer buckets and other attachments like forks.

The MCR machines can use both skid and loader buckets in the reversed position, allowing operators to push and load larger volumes.

They also feature a side boom folds 130 degrees backward, acts as a natural counterweight and also makes the machine more compact when the arm is raised and when it is on the ground.

Another innovating new Mecalac machine is the AS900tele. This 8-ton machine functions as a loader, a telehandler and a landscaping tool. Mecalac calls it a telescopic swing tool and with 22.2 gpm auxiliary hydraulics it can connect to a variety of attachments and do types of work usually done with wheel loaders, tele handlers and backhoes.

The AS900tele also features Mecalac’s AS Series swing design. Operators can swivel the fully loaded bucket 90 degrees on either side. With the rotated bucket, the machine can fill trenches or carry pipes while requiring less operating space.

To read more about the MCR Series, click here.

Up next in our rundown of the top equipment stories for 2020 is the introduction of Cat’s largest excavator, the 395.

The new 395 was introduced at ConExpo and replaces the 390F. It weighs in at around 209,000 pounds, making it about 5 tons heavier than the machine it replaces.

The 395 is powered by a 543 hp Cat C18 engine and Cat has increased swing torque and stick force on this machine by 10 percent, allowing for the use of larger work tools and buckets.

Another highly anticipated machine in 2020 was the unveiling of Kubota’s first mini skid steer, the SCL1000.

You can basically think of this thing as a shrunk-down Kubota CTL, because that’s basically how Kubota’s engineers approached the development of this thing.

But beyond the brand name and the awesome engineering reputation behind it, the SXL1000 has managed to carve out a unique place in the quickly growing mini skid steer segment.

With 1,000 pounds of rated operating capacity and a width of only 36 inches, no other mini skid steer on the market offers that amount of power with such a small footprint. Plus, because the design integrates a wide 9.8-inch track, ground pressure is only 4 psi—lower than any other model with this much operating capacity.

Kubota dealers report that the phones are ringing off the hook from customers hoping to get their hands on one of these machines.

While 2020 didn’t mark the year electric machines made a dent in the market—we’re likely still several years away from that milestone—many manufacturers debuted electric models and a couple of them are even selling them.

Volvo CE unveiled its electric compact wheel loader and compact excavator in April 2019 and started taking orders for those machines in February 2020.

Case unveiled the first electric backhoe—the 580 EV—at ConExpo 2020. Case says the machine will produce all the power and productivity of its counterpart, the diesel-powered 580. However, battery life could be as low as 4 hours depending on how hard you push the machine.

Takeuchi and Hyundai also showed off electric excavator prototypes at their ConExpo 2020 booths, as did Bobcat. But Bobcat also showed electric skid steers—including an “all electric” model.

To read more about the Case 580 EV, click here.

Though Bobcat unveiled the very first two machines in its new R-Series generation of skid steers and compact track loaders in late 2019, the majority of these machines were introduced this year.

These loaders feature a new structural design with cast steel loader arms that Bobcat says are more durable and more powerful. The loaders also feature a new engine, a new cooling system and a new cab.

So far, Bobcat has introduced 8 R-Series models and more are likely on the way.

To read more about the new lineup, click here.

The new Cat 306 CR is a first-of-its-kind machine for Cat, but it also represents an increasing amount of versatility that manufacturers are bringing to compact excavators.

This is Cat’s first true 6-ton excavator. It features a new more durable structural design, a swing boom and has a compact radius design with a 58-inch tail swing with the counterweight equipped.

It features load-sensing hydraulics and has Cat’s Stick Steer system as a standard feature. This allows the operator to switch from conventional lever/foot pedal steering to controlling travel using the joystick—similar to operating a CTL.

There’s also a new XTC or tool carrier configuration that brings even more versatility. You can check out all the details in this video.

At World of Concrete 2020 Case CE introduced a lineup-wide refresh of its skid steers and CTLs with the new B Series.

The focus of these new machines is improved operator comfort through a redesigned and more ergonomically laid out cab, and better control response thanks to electro-hydraulic controls.

Another notable improvement is the inclusion of a new 8-inch touchscreen display with a split-view functionality that can be used in two modes: one with the rear view camera on at all times while showing the main machine parameters at the bottom of the split screen, and another where the rear view camera is only shown in reverse.

To read more about the Case B Series, click here. 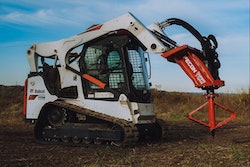 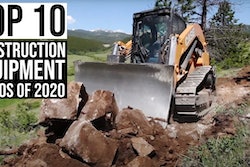 The Top 10 Construction Equipment Videos of 2020 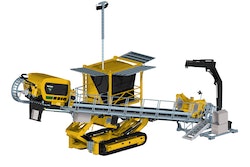