Developed under the name “Project Zeus,” the loader’s model name is the 580 EV. Case says it delivers the same power and performance that you’d expect from a diesel-powered backhoe in a machine that produces zero emissions.

You can check out all the details and hear what the 580 EV sounds like when it’s running in this video.

Case says though the production model will look more like a traditional backhoe, the 580 EV they unveiled at the show is not a concept machine. The company is already in production on these machines and has sold two to U.S. utility companies.

The company says it will produce 580 EVs in response to demand and will ramp up production over the next few years.

The backhoe is powered by a 480-volt, 90 kWh lithium ion battery pack. This battery pack separately powers the drivetrain and hydraulic motors of the machine and that is the key for achieving equal breakout forces to those you’d find on diesel-powered machines.

And when the 580 EV is in simultaneous operation of the loader and drivetrain, the battery pack actually delivers better performance than it’s diesel counterpart, says Eric Ziesser, Case CE global product director for compact equipment.

Charging the battery will take about 8 hours and Case expects most customers to charge up overnight, Case CE innovation manager Chris Andreuccetti tells Equipment World. On a full charge, the 580 EV can work an 8-hour shift.

“Eight would be the average, Andreuccetti says. “It could be less than that if they’re doing very heavy work especially with the backhoe end of the machine. You’ll see 4-6 hours of usage if you’re running a very heavy hammer attachment and busting out concrete.”

The 580 EV represents Case’s formal entry into the electric equipment market. And because this is the company’s first electric machine it partnered with Green Machine Equipment and Moog Inc. to develop the 580 EV.

“Green Machine has been selling and producing electric mini excavators into the market for approximately six years,” Ziesser says, adding that Moog provided Case with electric motors, components and software.

The 580 EV will be priced higher than Case’s diesel backhoes, but Case says an electric backhoe could save fleets as much as 90 percent in annual vehicle service and maintenance costs.

“We’re getting rid of the diesel engine and all of those daily checks associated with it, and their service and maintenance costs,” says Ed Brenton, Case CE product marketing manager. “Think about the daily checks you’re doing before you start up (a diesel) machine. You have to check the oil, you have to check the coolant, you’re going to reach over and check the air filter, and you’re going to get dirty and covered in oil. You can avoid all of that with an electric backhoe and you can save money doing it.”

Case says owners could see a payback on the purchase price premium of the 580 EV is five years, though some fleets could see that payback sooner.

As we said before, the electrified backhoes that hit the jobsite won’t quite look like the Zeus show floor model at ConExpo 2020. Instead they’ll look more like a normal 580 EV, though they’ll run much quieter. The metallic paint job and cool headlights on the show machine aren’t very jobsite practical on a real-world jobsite and were only added to distinguish it from the diesel powered machines at ConExpo, Case tells us.

Not only will the 580 EV look like its diesel-powered counterparts, but it will feature many of the same features found on Case’s N-Series backhoes. For instance, the 580 EV has the same cab, premium seat options and joystick controls found on the 580 N.

One last note: A lot of folks at the show looking at thte 580 EV actually stopped to ask about the tires. They are Michelin CrossGrip tires and Ziesser tells us they were chosen specifically for this machine. They have a non-directional tread design that Case and Michelin say provides better handling and a more comfortable ride on road, grass and snow. Ziesser says they ride a bit quieter too traditional backhoe tires too, which is a bonus because with the 580 EV you don’t have the noise of a diesel engine to cover up a loud tire tread. 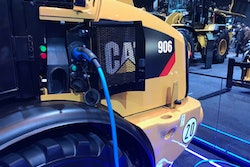 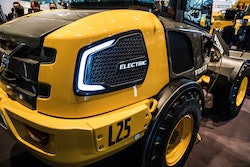 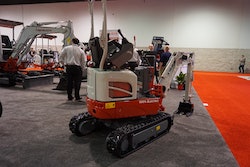