The new loaders join the Bobcat R-Series S76 skid steer and T76 CTL unveiled in September 2019 and launched to the market in February 2020.

You can check out all the details on these new models and how the Bobcat R-Series loader lineup is shaping up in our full video breakdown. Or, if you prefer text, read on after the break.

All four new R-Series loader models are powered by Bobcat’s new 2.4-liter, turbocharged engine with a new inline design. On the new S66 skid steer and T66 CTL you’ll get the same 74-horsepower rating as you’ll find on the larger S76 and T76. In terms of operating capacity, the S66 delivers 2,400 pounds while the T66 has 2,450 pounds of capacity. Lift height maxes out at 120 inches.

The S64 skid steer and T64 CTL have a 68 hp rating and both loaders will give you 2,300 pounds of rated operating capacity and 120 inches of lift height. 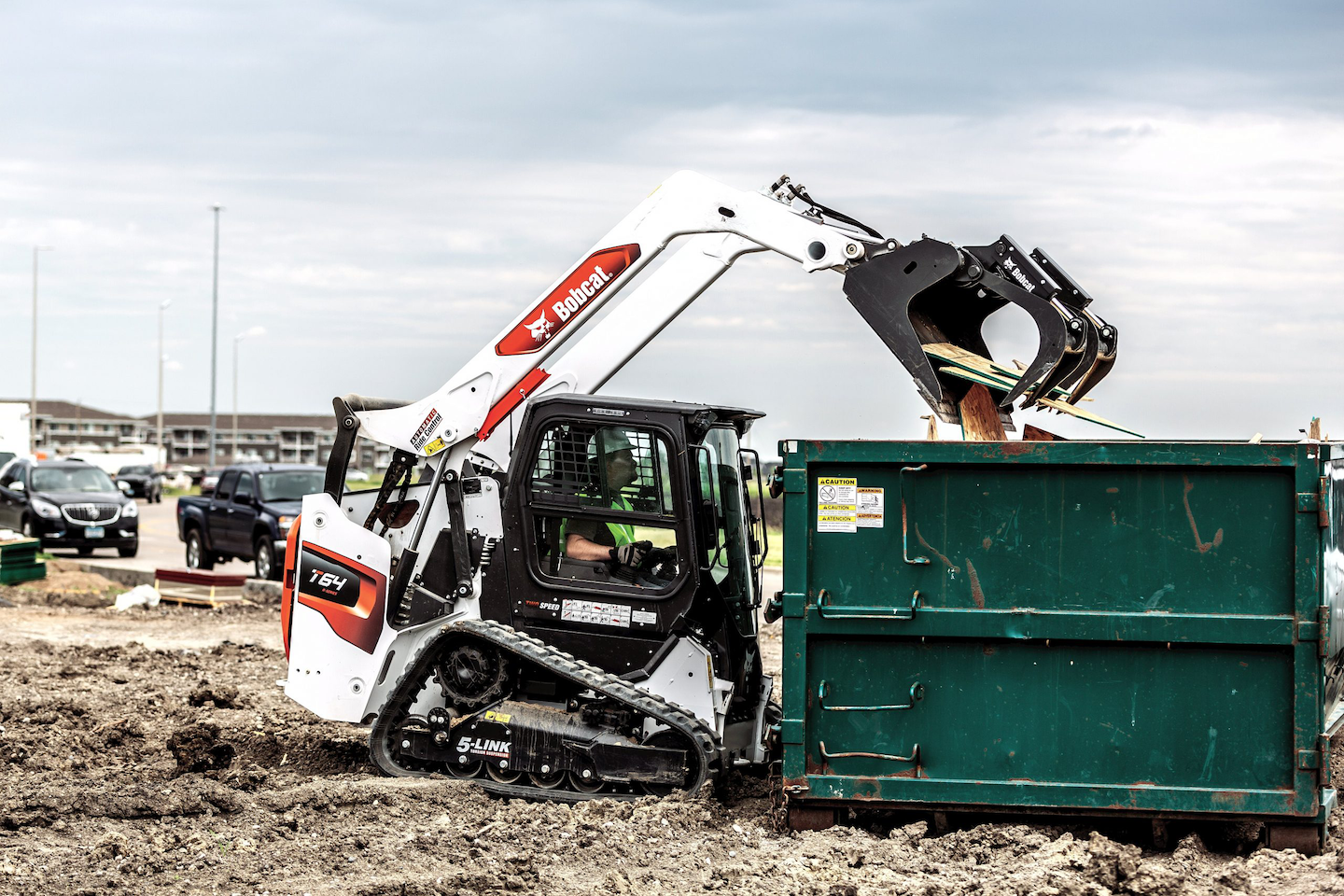 You’ll notice that Bobcat has gone with an updated look on these machines and the company says it wasn’t just done for an aesthetic refresh. Overall, Bobcat claims these new loaders are tougher and more durable than the machines that came before them.

Specifically, the new loader arms on the new R-Series machines are built with cast steel. Bobcat says that during manufacturing, the corners of the new arms can now be formed without the need for additional fabricated plates that introduce weak points to the design and can also block an operator’s visibility to the ground.

Bobcat says the new cast-steel design is 20-percent stronger than the former fabricated steel design. The other benefit is that it has allowed Bobcat to slim up the loader arms while also making them more resilient, putting more steel where it was needed for better durability and reinforcement.

Bobcat notes that its Bob-Tach attachment mounting system is also built from a cast steel process for a stronger connection point. The system has fewer welds overall than past mounting systems along with openings that allow dirt and debris to pass through to make clean outs easier. 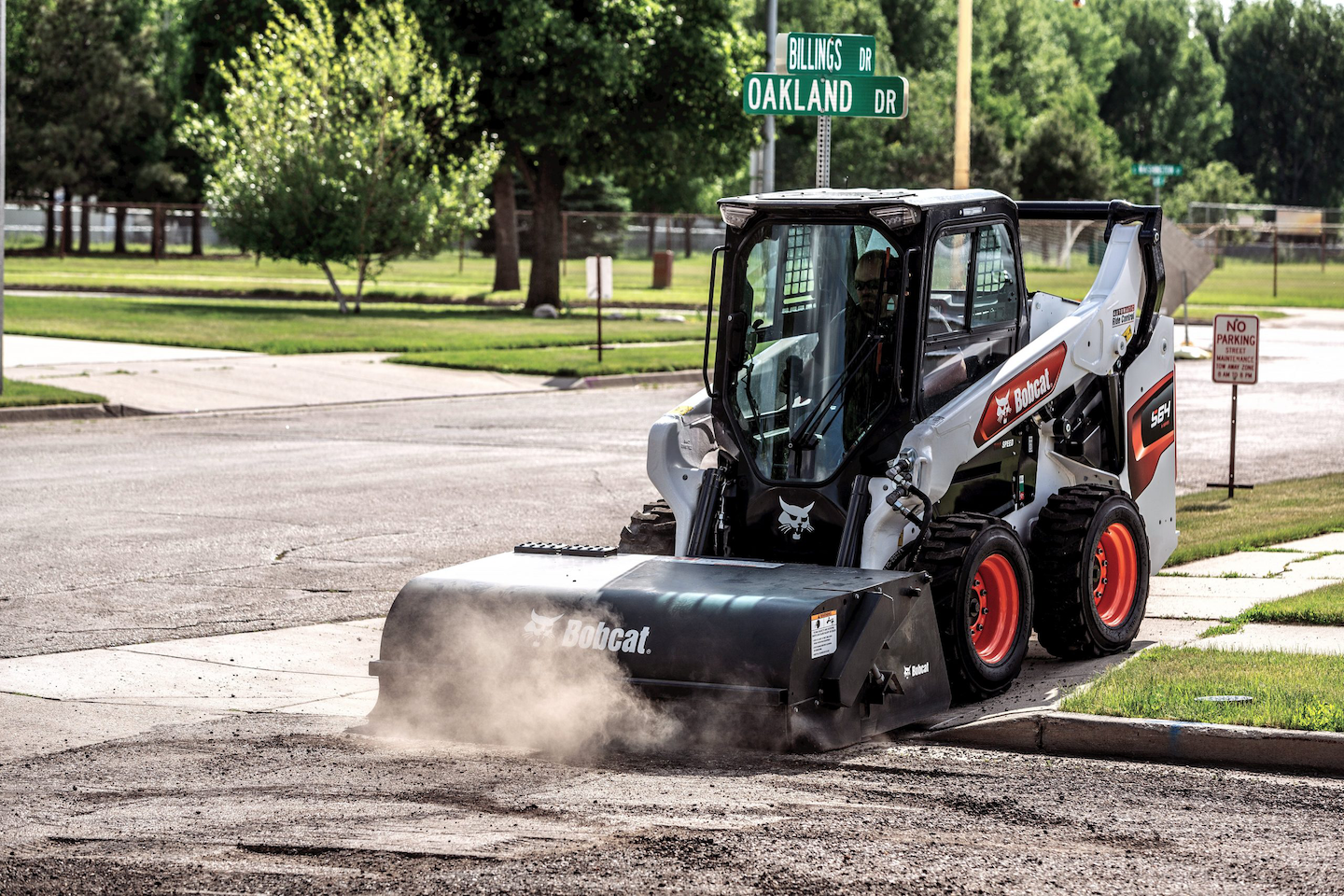 The new design of these lift arms also changes the placement of the linkage. It’s no longer located below the arms themselves and is instead now on the back of the machine for a further increase in visibility.

Bobcat has also updated the tilt cylinder design, removing the hoses, tubes and skid plates for more visibility to your bucket and other work tools.

But the most practical improvement these new loaders benefit from the loader arm overhaul is more lift capacity throughout the loaders’ range of motion, including at full reach. Bobcat also says that all of the new loaders have seen increase in lift height for easier dumping into high-sided dump trucks and hoppers.

Alongside these loaders, Bobcat is launching a new heavy duty bucket with roll back. The buckets feature a waffle skid underneath for increased rigidity, and bolt-on cutting edges are standard for better soil shaping. 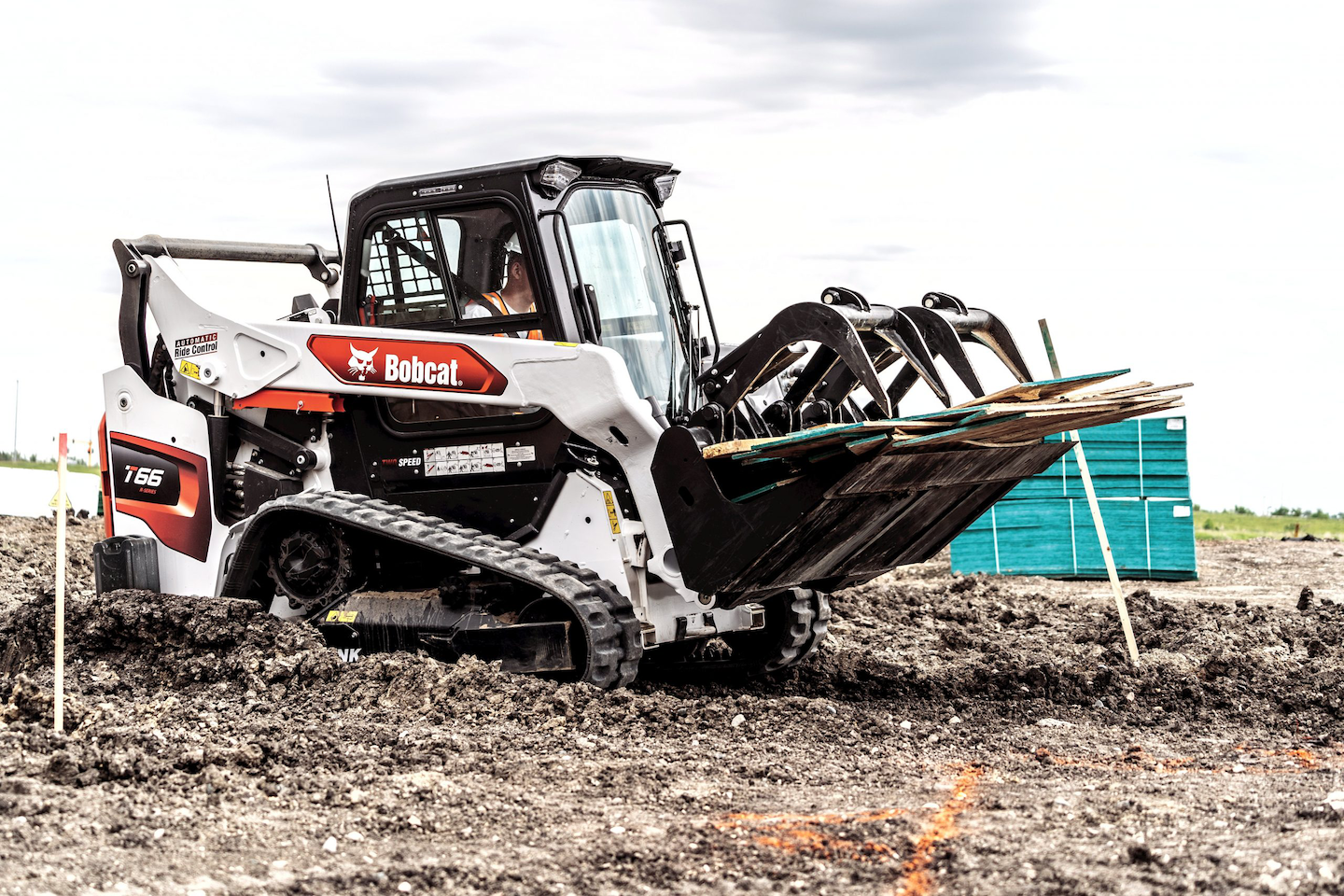 Another big change on the design of the compact track loader models is to a more stable five-link torsion suspension that has now completely replaced the roller suspension found on past models. The big differences for operators is that the torsion suspension reduces stress and vibration, making operation more comfortable. Bobcat says it has also managed to get two more of these tracks on the ground.

Earlier we mentioned that new inline engine design, and while that new engine features a vertical fuel tank and improved fuel efficiency, the big change to these new loaders in terms of performance is going to be the new cooling system Bobcat has implemented on the R Series.

Bobcat says operators are calling on skid steers and compact track loaders for increasingly larger and more difficult jobs, so the redesigned cooling system is 50 percent larger than what was found on the M2 Series.

In addition to moving the cooling package further away from the cab to decrease cab noise, the new package also has a different cooling pattern. Instead of drawing air from the top and blowing it out the sides of the engine compartment, the new package does a better job of surrounding the engine with cool air, drawing air from the rear of the machine and blowing it out the top of the package.

An available option on the new cooling package is a reversing fan. 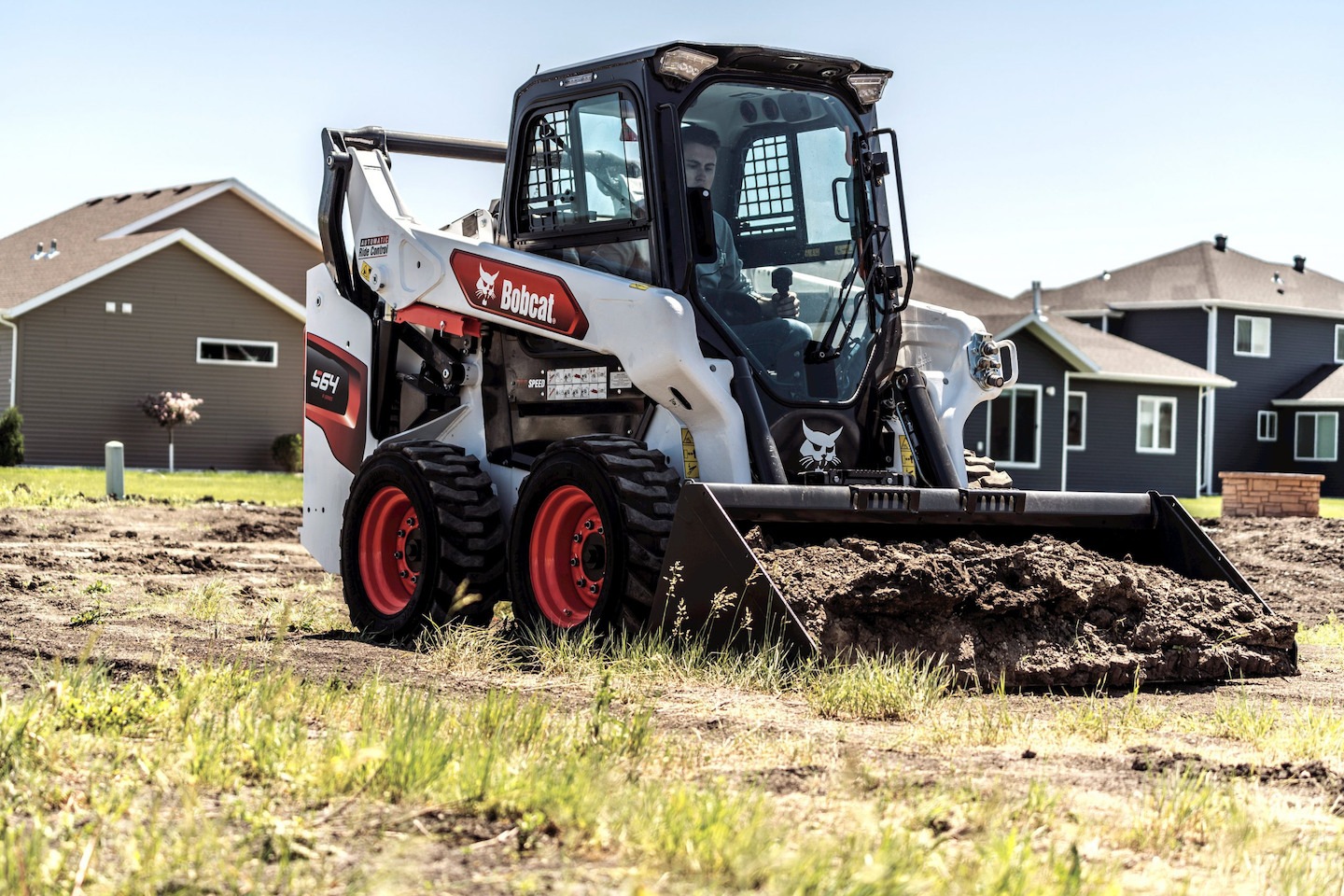 We just mentioned the reduced noise levels in the cab thanks to the new location of the cooling package, but that’s far from the only improvement operators will find once they hop inside one of these new R Series machines.

Another big reason why the new cabs on these machines are quieter is the new one-piece, sealed and pressurized design Bobcat has used. Bobcat says the new design does a better job of isolating the operator from engine and hydraulic noise while also improving the efficiency of the machines’ heating and air conditioning.

And because it’s a one-piece design whenever it’s time for servicing or making repairs to the machine, the entire cab on R-Series machines rotates out of the way for better service access.

The cab is also larger than those found on previous machines and you’ll also find keyless start as a standard feature, a heated air-ride seat, a Bluetooth audio system, a 5-inch standard display or the new optional 7-inch Bobcat Touch display. The touch display gives operators access to detailed machine information and can be navigated with touch or jog dial. The touchscreen is waterproof, can be used with gloves and and has is scratch resistant. 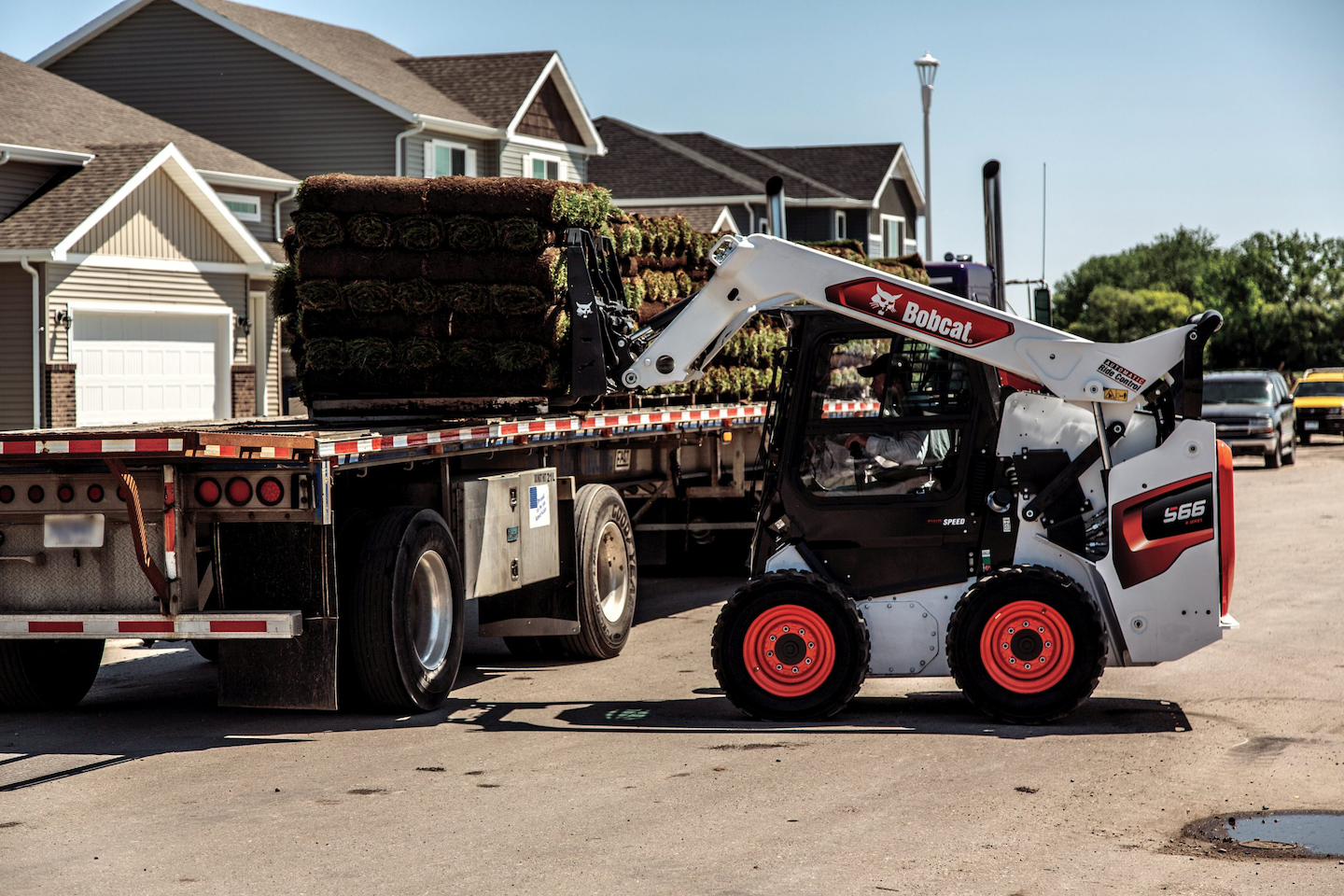 Another option for increased visibility to the tracks or wheels of the new R Series loaders is a new clear-side cab which removes the steel mesh screens front he side windows. When you order this clear-side cab because you’re letting so much more sunlight into the machine, Bobcat includes automatic climate control.

And though this cab option has more glass, Bobcat says it’s still highly protective of the operator with 4,000 psi polycarbonate reinforcement to guard against outside impacts.

And while steering is still manual, Bobcat has added electric pedals which allowed for the inclusion of dual direction bucket positioning. This feature automatically keeps a load at a consistent angle when raising and lower throughout the lift cycle. And since you’re able to keep a level bucket, the feature reduces spilling and makes experienced operators more efficient while making operation a bit easier for new operators.

Atop the cab is a new LED lighting system. The design of these new lights allow the light to wrap around the corners of the machine for better visibility at night. With the optional side lights, Bobcat says the R-Series machines can provide 180 degrees of visibility at night.

Finally, in addition to that new rotating one-piece cab design, Bobcat has made a few more changes for easier maintenance including a protected battery with remote jumpstart, a new and larger fuel filter for better system protection and longer filter life, and adjustment free engine belts.