Case Unveils DL550B: Unique 2-in-1 machine is both small dozer and large CTL

At ConExpo 2020 Case followed its unveiling of a fully-electric backhoe with the introduction of the DL550B, a machine that represents an entirely new machine category—the compact dozer loader—and one that has been several years in the making under the code name Project Minotaur.

The DL550B isn’t just a compact track loader equipped with a dozer blade. From the undercarriage to a chassis-integrated C-frame, to full machine control support, it was designed to be a true two-in-one machine, capable of both heavy dozing and loading tasks.

Check out our full coverage in the video below along with footage of the DL550B in action. Or if you prefer text, read on below.

The DL550B traces its origins back to ConExpo 2017. At that show, Case introduced a prototype it was affectionately calling Project Minotaur, a reference to the monster from Greek mythology that was part man, part bull. Or in the case of Case’s monster, part compact track loader, part bulldozer.

The model name for that original Minotaur prototype was the DL450 a nod to Case’s former 450 dozer. It was created by taking the base frame of a vertical-lift TV380 CTL that was then married with a radial-lift loader arm design similar to that of the former Case 465 skid steer.

That prototype concept created a huge amount of buzz at ConExpo 2017. The production machine unveiled at ConExpo 2020, however, is a very different beast.

“This machine is basically a step up above what we currently have on our other (CTL) models,” says Brady Lewis, Project Minotaur program manager at Case. “…We do still run a hydrostatic but this is a pressure-compensated, load-sensing system. So it’s a closed loop system that provides more efficiency and really what that’s for is that’s giving you that high tractive effort that you are expecting from a dozing application to make sure you’ve got good push forces.”

Another key change in the development of the production model in the time since the concept debuted three years ago, is that Case switched from a radial-lift design to a vertical-lift design. That change is what enabled a jump from 4,500 pounds of capacity to 5,500 pounds, while also increasing dozing performance and allowing the machine to reach deeper into trucks.

Design, capacity and performance aside, Case tells us that the three key elements of the DL550B that make this a true two-in-one machine are its dozer-inspired undercarriage, the chassis integrated, pin-on C-frame that holds the 6-way dozer blade, and its control scheme. So let’s dig a bit deeper into those.

Let’s start with the undercarriage. It’s available with both rubber and steel tracks and Case calls it a “dozer-style” undercarriage. It incorporates design elements of both a CTL and those of both small and large dozers. Specifically Lewis tells us that the DL550B’s undercarriage was informed by Case’s 650M, 1650M and 2050M dozers.

“The rolling components—the rollers, the chains, the grousers—those are literally the same components that we use on our much bigger Case 650M dozer,” Lewis says. “…Also the mounting scheme for this undercarriage, there is a solid steel cross shaft that runs across the length of the vehicle and that is the same mounting scheme that we use on our 1650M or 2050M dozer.

“That gives you a true alignment across your undercarriage and that is key to long life when it comes to steel rolling components.”

Not to belabor the point, but putting a dozer blade on a CTL is not a novel concept. A machine that performs serious dozing tasks and then quickly pivots to heavy CTL loading tasks, however, is quite novel. And the key to that pivot is the DL550B’s c-frame and six-way blade.

The C-frame attaches directly into the chassis and primary coupler of the DL550B in a matter of seconds. (At one point in our video above, you can actually see the connection locking in.) Case tells us this design was the difference maker in delivering true six-way blade performance and long-term precision.

Plus, it’s better from a strength and reliability standpoint as the C-frame design channels pushing power through the chassis structure of the machine while preventing that force from going through the lift arm.

“The lift arm of the vehicle does provide the vertical force but it’s actually hanging on a four-bar linkage so that no horizontal forces are transferred to the lift arm,” Lewis says. “…It also gives you better control because there’s no flex in those linkages, there’s no flex in that joint and you’re able to have a good clean cut while you’re moving.”

And like its dozer cousins, the DL550B is available with an optional and fully integrated ripper.

The final core component of the DL550B are its integrated dozer controls. Inside the cab operators will find a set of electro-hydraulic dozer joysticks that also operate similar to the ISO controls found in skid steers and CTLs. Case says switching between dozer and CTL control is as simple as pushing a button.

In CTL mode, the left-hand joystick controls steering and forward and reverse travel, while the right controls boom and bucket. In dozing mode, the left-hand still handles steering, forward and reverse, while the right controls the lift, angle and tilt functions of the six-way blade. Case has also incorporated its blade shake and manual pitch adjustment dozing features into the dozing control mode.

This two-way control scheme represents what Case says is a huge upgrade over the control of a CTL with a six-way blade attachments.

“A lot of times when you add an aftermarket six-way blade to a CTL it’s a little difficult to control,” Lewis says. “You only have one-set of hydraulic lines, you’re not able to do a true multifunction blade angle and blade tilt at the same time. This let’s you sit in there and run it like a dozer.”

Because Case wants you to do real dozing work with the DL550B, they’ve also made sure it’s compatible with 2D and 3D machine control technology.

The machine will be available with Case’s Universal Machine control system which equips it with a universal harness for blade guidance systems, universal machine brackets and mounts, and universal jumpers so that you can use whichever brand of machine control you want.

If you don’t want to deal with masts, lasers or GPS, the DL550B is also compatible with Case’s SiteControl CoPilot. Developed by Leica, this system allows you to set a desired slope or grade reference and will automatically adjust blade position and hold the machine to that slope or grade and all at a lower cost than traditional machine control.

Case says the combination of this available technology and the power of the DL550B allows for precise grading, from sub-base all the way up to finish grade — and can come in especially handy on smaller yards or jobsites where larger dozers or graders may not be able to gain access.

Now that we’ve covered all the dozer design that went into this machine, let’s talk about just how capable of a CTL this is once you’ve dropped the blade.

Lewis says the C-frame and blade assembly can be hydraulically detached from the DL550B in under a minute. Once disconnected, you can attach a bucket, fork or any one of hundreds of other attachments. Case includes a 1.25 cubic-yard-bucket with the machine and that bucket is available with either a cutting edge or a SmartFit teeth system.

“As a compact track loader, this machine is one of the biggest and most powerful in the industry,” Lewis says.

As we mentioned earlier, the machine has a 5,500-pound capacity and it has a 140-inch hinge-pin height. Case also offers auxiliary hydraulic options of up to 40 gallons per minute at 4,100 psi—higher than any of its other CTLs.

“(That) will run the biggest mulching head or cold planer that you can put on this machine,” Lewis says.

In other words, this isn’t just a painstakingly designed small dozer, it’s the most powerful CTL you can buy with the Case name on it.

Now apart from the integrated dozing controls and machine control support, once you’re in the cab what you’ll see is very similar to the cab found on Case’s latest B Series skid steers and compact track loaders.

For more information on the cab design elements, check out our coverage of the Case B Series loaders.

So with all of that information, exactly who is this machine for? Lewis tells us that it’s meant for any contractor that wants to do the work of two machines with one truck and one trailer.

Specifically, the DL550B will shine on residential, landscaping, forestry and small commercial jobsites.

After years of development and feedback from customers who have put the DL550B to the test on real world jobsites, Case is so confident in this machine that it has dedicated an entire production line to it. 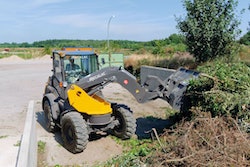 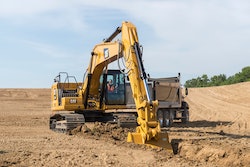 Excavation Innovation: Everything you need to know about the latest mid- to full-sized excavators 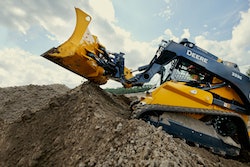