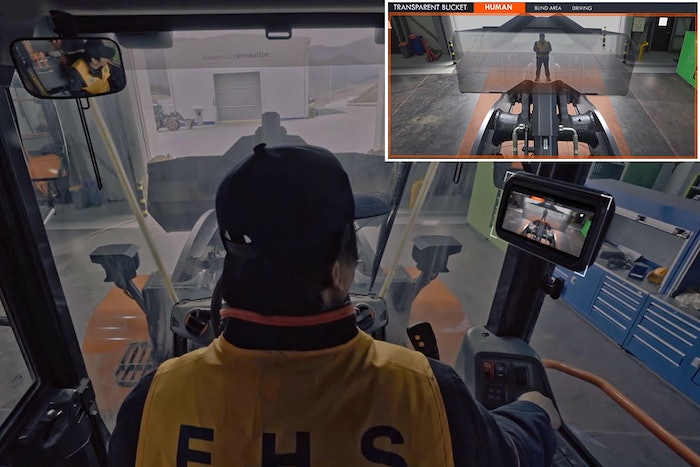 Since it was announced in March, Doosan's Transparent Bucket has generated significant reader interest. Unlike some technology announcements, however, contractors won't have to wait long to buy this feature.

On-board cameras use a curved projection method to provide real-time images in the cab showing views that are normally blocked by a raised bucket. The cameras are located on the cab roof and at the front bottom of the loader frame.

"Once operators raise a bucket into the transport position, they can no longer see in front of the bucket," Kleingartner says. "These cameras look beyond the bucket and transfer an image of what's behind that bucket."

Kleingartner cites a recent instance at a company training event as an example as to how the Transparent Bucket provides this significant gain in visibility. "We were using a tour bus to transport the attendees to and from the hotel," he relates. "We parked the loader right in front of the bus, raised the bucket up, and you could no longer see the bus. But if you looked at the display monitor, you could see that the bus was right it front of it."

In addition to gaining visibility to obstacles — and most importantly people — that could be obstructed by the raised bucket, the Transparent Bucket also allows operators to see exactly where the edge of an embankment is in front of them, helping them position the loader prior to dumping.

Doosan says it also helps productivity by providing a forward view during loading and unloading and when carrying a load.

Pricing on the option is still under evaluation, says Kleingartner.

Saying it's the first company to develop and apply the front projection function for a construction machine, Doosan has applied for patents for the bucket system in North America, Europe, Korea and China.

Here's a Doosan video on the Transparent Bucket: