Redesigned from the Ground Up: Doosan's New DL-7 Series Wheel Loaders Have Arrived

Doosan's new DL-7 Series wheel loaders have been revamped inside and out, representing the company's first major redesign of its loaders in over a decade.

The exterior look has been winning awards in Europe and South Korea, where the new series was launched last year, for its streamlined, curvier appearance. The U.S. market is the next stop on the company's global rollout, with seven models ready for sale now and five more arriving next year.

“While we have made enhancements to our wheel loaders during the past 15 years, this is a significant milestone in the Doosan product,” says Aaron Kleingartner, dealer and product marketing manager. “The new -7 Series wheel loaders represent more than a decade of research and development, as well as incorporating feedback from our customers."

The models now hitting the U.S. have bucket capacities of 3.7 to 8.4 cubic yards and range in horsepower from 189 to 394. They will replace the company's DL-5 models.

The cabs have been redesigned for more room, comfort and easier operator control. They feature 14% more glass than previous models for improved visibility, as well as a more stylish look. Visibility is further improved by a full glass door, large side- and rear-view mirrors, and a standard rearview camera. The camera's view appears on an 8-inch touchscreen that can be height-adjusted without tools.

Doosan gave the cab more legroom and storage space than predecessors. The heating and cooling system has been redesigned with new outlet locations for improved airflow. The main controls have been repositioned for easier operation. Electric steering is an option on certain models, in which the electronic joystick is positioned on the left armrest and can be customized to the operator's sensitivity preference, the company says.

Doosan also gave the DL-7 loaders an array of new technology. The Doosan Smart Key key fob unlocks the cab and allows the operator to start the machine with the push of a button.

A new Smart Load system displays the weight of the material in the bucket. Load Isolation keeps the loader stable while moving to improve productivity and fuel efficiency. And a Smart Guidance System analyzes operator habits and then displays tips to improve efficiency.

In South Korea, some of the DL-7 loaders are being equipped with Doosan's industry-first transparent bucket, which uses front projection technology to eliminate blind spots for operators when the bucket is raised. The company has said it plans to roll those out globally as well, but no word yet on when they'll hit the U.S. market.

For contractors in need of higher productivity, four models – the DL320-7, DL380-7, DL480-7 and DL580-7 – get a 7% boost in bucket capacity. These models also feature larger, stronger axles and a strengthened box frame, Doosan says. The new axles also improve the brakes' capacity and life. They also have large center bearings and self-centering, double-tapered roller bearings to distribute vertical and horizontals loads over a larger area, the company says. The bearings also have dust covers and seals and are vented to prevent grease overfill.

The radiator on the new heftier loaders is 40% wider than previous models, making it more resistant to clogging and easier to clear. The speed of the reversible hydraulically driven fan can be adjusted by the touchscreen to match operating temperature, and it can be folded out of the way when it's time to clean the radiator.

Doosan also offers a new factory option automatic lubrication system that greases the middle of the pins and bushings for better distribution, the company says.

The loaders come with DoosanConnect telematics, which allows owners to use a smartphone, tablet or computer to check machine location and such data as operating hours, fuel usage, engine idle versus work time, error codes, engine and hydraulic oil temperature.

In 2022, Doosan says, it plans to roll out the remaining five models of the new wheel loader lineup in the U.S. Those models will range in standard bucket capacity from 2.6 to 3.3 cubic yards, and two of them will be toolcarriers. 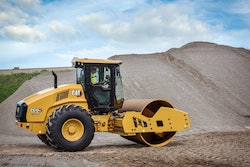 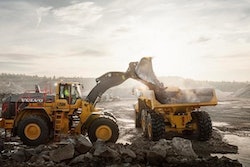 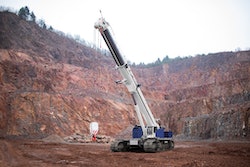