Another benefit of an aluminum Ford F-150? When you ding or scratch the body, it won’t rust 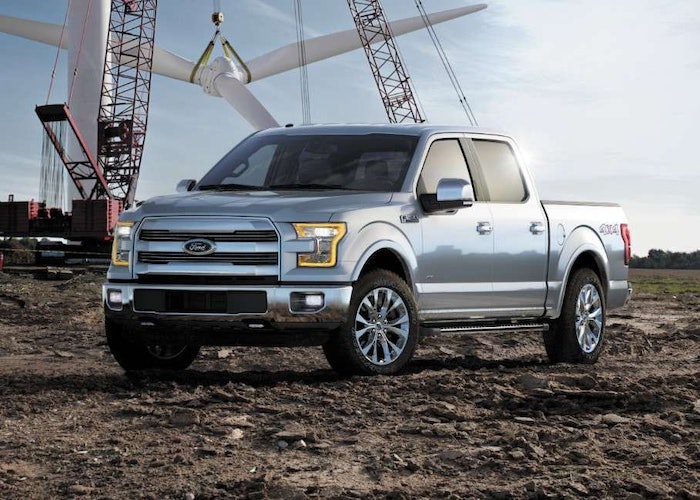 The biggest and most-discussed benefits of Ford bringing an aluminum body to the 2015 F-150 are better fuel economy and performance. Going aluminum allowed Ford to shave 700 pounds off the weight of the truck, freeing up more of the engine’s power when towing and hauling.

Another property of aluminum, that it doesn’t rust, has largely been exempt from discussion around the new F-150. But this morning, Ford Trucks communications manager Mike Levine tweeted this about the 2015 F-150’s military-grade aluminum alloy body:

In response, one of our Twitter followers, @KevinBYUcougs, made the astute observation that that type of thing could come in handy in “places that use lots of salt in the winter.” Levine agreed.

Aluminum doesn’t rust because rust is iron oxide, formed when iron and oxygen chemically react in the presence of air and moisture. However, aluminum does corrode in what’s referred to as “white rust,” or aluminum oxide.

The cool thing about aluminum oxide though is that once it forms, it protects the rest of the aluminum from corroding any more. Rust on the other hand flakes off and exposes more metal to corrosion.

And while it may be a comfort to know that the dings and scratches you will inevitably put into a 2015 Ford F-150 won’t rust, you might still be worried about whether or not you’ll be able to take it to a body shop or dealer and get those imperfections buffed out.

Aluminum is known to resist straightening attempts, and back in January Bloomberg reported that “less than 10 percent of the more than 30,000 independent repair shops in the U.S. are certified and meet training and equipment requirements to work with most aluminum auto-body parts.”

However, since then, Ford executive Vice President of Global Marketing, Sales, Service and Lincoln Jim Farley told Truck Trend that the company is making progress in ensuring customers have a place to have their aluminum F-150 repaired before the truck launches this fall.

“You know about 20% of the repairs for full size trucks are done by dealers, about 80% are independent repair body shops. We signed up about 400 dealers now – I think it’s just shy of 500 dealers – and so we’re about halfway to our goal,” Farley said. “And we’ll have that training done by the third quarter, and all the equipment installed, the rivet guns, the MIG welders, all the containment [gear].”

Plus, it won’t matter soon anyway. In the near future all of these body shops will need to know how to fix aluminum because more and more vehicles will be made out of it. While the move to aluminum was initially seen as a risk, Ford’s move has triggered a “stampede” on the material from its competitors.

@KevinBYUcougs @Ford @Equipment_World It's been exposed to #Detroit salt this winter.

@mrlevine @Ford @Equipment_World no signs of rust yet? That would be huge for places that use lots of salt during winter.