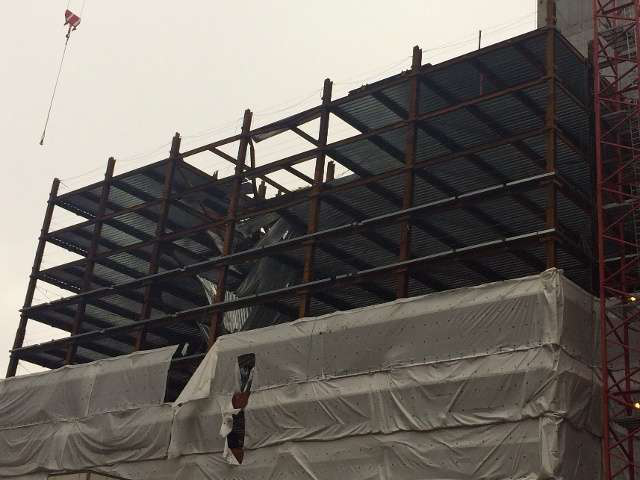 Editor’s Note: This story has been updated to include the injury of a third worker in the accident.

Two workers were hospitalized Thursday morning in Boston in the wake of a partial collapse of a 33-story residential building under construction.

The workers’ injuries were said to be non-life threatening, but one of the workers did suffer a serious head injury.

A third worker injured his wrist, but did not require hospitalization.

Seven floors of the unfinished structure partially collapsed just before 8 a.m., according to a report from the Boston Globe. The highest level the site, located in the city’s Chinatown neighborhood, had reached was the 12th floor.

Boston Fire Department Deputy Chief Robert Calobrisi told WCVB TV the collapse was triggered when a “dead” or heavy load was placed on the top of the structure. Boston Police Commissioner William Evans said the roof “gave in a little” causing all the floors down to the fifth to “pancake,” as Calobrisi put it.

“Just going like a roller coaster at the top, going straight down,” Calobrisi told the TV station.

Streets surrounding the site were shut down and 120 construction workers were evacuated from the site. The Occupational Health and Safety Administration are carrying out an investigation. AvalonBay Communities Inc. owns the building and the construction firm doing the work is John Moriarty & Associates.

The building, which would house 398 apartments when finished, was scheduled for completion in mid-2015. It’s unclear what kind of delays the project will face.