After much hype and months of build-up, it’s here. And despite a multitude of improvements over previous models, most are calling Ford’s newest pickup the automaker’s biggest gamble yet.

Ford unveiled the new 2015 F-150 in the wee hours of Monday morning and the 111-year-old automaker calls it the strongest and smartest pickup that it has ever made.

As reported in December, the body of this new F-150 is made of aluminum. But anyone kicking around the idea of flimsy beer cans in their head needs to think again. The body of the new F-150 is made from high-strength aluminum alloys currently used in aerospace, commercial transportation and energy applications. To get a better look at the redesign, be sure to scroll down and take a look through the huge gallery below.

This is the first time aluminum has been used throughout the body of an F-150 and Ford says in addition t0 saving weight, the body is more resistant to dings and dents. To make such a body required billions of dollars worth of upgrades at Ford factories.

But about weight… The 2015 F-150 is 700 pounds lighter thanks to its new aluminum body and Ford engineers say the weight reduction allows the truck to “tow and haul more than ever while also improving acceleration, braking and handling performance.” Not to mention making for a big increase in fuel economy. Ford hasn’t released exact numbers just yet, but most believe the truck will get somewhere around 26 or 27 miles per gallon on the highway.

And if you’re still worried about the durability of aluminum truck, 77 percent of the truck’s fully-boxed frame is made from 70,000 psi steel. It’s stronger—and up to 60 percent lighter—than the 2014 frame.

The new truck has four engine options including a new a 2.7-liter EcoBoost with Auto Start-Stop technology. This technology saves fuel by shutting off the engine when the truck is stopped (except when towing or in four-wheel drive) and restarts the engine in milliseconds when the brake is released.

Ford will also offer a new naturally aspirated 3.5-liter V6 along with the 3.5-liter EcoBoost and the 5-liter V-8 engines that are available in the current F-150.

The truck will be available later this year in the XL, XLT, Lariat, Platinum and King Ranch trims and in an FX4 off-road package. Unfortunately, no updates to the Raptor’s styling were announced with the F-150.

But the improvements to the F-150 aren’t all physical. There’s a ton of new technology stuffed inside this pickup.

The 2015 F-150 is the first pickup with a 360-degree camera system that provides the driver with a view of all four sides of the truck. The truck stitches together real-time images from cameras mounted in the grille, tailgate and under each sideview mirror to give the driver an overhead view and up to 7 feet of surrounding space to assist in parking or navigating tight corners. The truck also features blind-spot alerts.

The F-150 puts those front-mounted cameras to use while you’re on the road as well. It’s Lane-keeping assist feature monitors lane markings and alerts the driver when the truck leaves its lane. It will even provide steering torque to pull it back in if it’s needed. Adaptive cruise control uses radar to detect approaching slowed traffic and slow the truck’s speed and the collision mitigation system can pre-engage the brakes to help the driver slow the truck even more quickly.

One of the cooler features on the new truck? Ford saw GM’s nifty smooth-open tailgate and one-upped it with remote control. Simply press a button on the key fob and the tailgate lowers itself. There’s also an integrated step built into the tailgate. Once the tailgate is lowered, the step can be pulled out from the tailgate and used in one motion.

Ford engineers also heavily implemented LED lighting in the new F-150. The interior is LED-lit and LED headlamps are available for the first time in a medium-duty pickup. The sideview mirrors have front-facing LED spotlights and the interior of the cargo box is LED-lit as well. 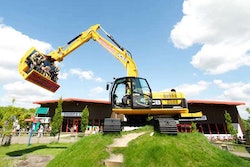 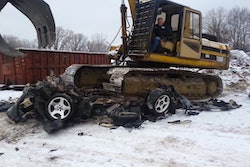 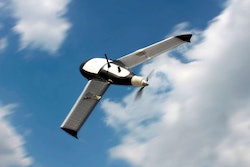