How would you like to get an extra dollar for every five miles you drive? That’s one of many notable promises made by Tesla Motors at the unveiling of the electric Tesla Semi.

The boast gets at the heart of what owner-operators care the most about: Would this equipment save me serious money? That question traditionally hinges on not just fuel efficiency, but also truck price and maintenance costs.

GMC unveils Sierra 2500HD All Mountain: A Denali with tracks

General Motors appears to slowly be amassing a fleet of pickups focused on snow applications. The automaker’s recently unveiled 2018 GMC Sierra 2500HD All Mountain is its latest concept pickup and follows the Chevrolet Silverado 2500HD Alaskan Edition which was unveiled at the 2016 SEMA show.

Unlike the Alaskan, whose custom plow is meant to remove snow from your path, the Sierra All Mountain is designed for simply gliding over the white stuff.

GMC calls it a “one-of-a-kind snow-climbing machine.” In non-marketing speak that means it has Mattracks-built tracks where the tires usually go.

The Vermeer ECO75 and VX75 from McLaughlin are designed to fill a gap in the mid-range vacuum excavator market, for use on compact job sites, production potholing, setting power poles or fluid management during directional drilling, the company says.

The vacuum blower produces 1,200 cubic feet per minute, and the water pump can provide up to 3,000 pounds per square inch of pressure. They are both powered by a 74-horsepower Deutz Tier 4 Final engine, which is designed to reduce fuel consumption.

Talbert also designed the 55CC-RP trailer with dual kingpin settings, so it can be operated empty without a permit in states with 43-foot kingpin laws. Talbert achieved this by adjusting the trailer’s deck length, gooseneck radiuses and rear ramps from previous roller paver models.

The trailer’s overall length is 53 feet, so no need for an overlength permit in certain states. It has a 12.5-foot rigid-load base rating, a 24-foot clear deck length in the well and 20-inch cross member spacing along with auxiliary cross members on the lower deck. It has three axles that are close-coupled, and it can accept optional pin-on axles for loads requiring four axles in a row, the company says.

The debut of Mack’s new Anthem tractor in August meant some fairly significant changes for the company’s Pinnacle model.

For the coming year, Pinnacle axle forward models will get all-new interiors and LED headlights, along with a new grille that mirrors the look of Anthem.

The XL 3300 V is a 4×4 wheeled excavator capable of being driven up to 20 miles per hour both on and off pavement. Gradall says the 39,295-pound machine is also the only on-/off-highway excavator that “can work at the front, rear or either side of the undercarriage without the need to lower its optional outriggers or optional grading blade for extra stability.” 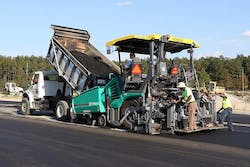 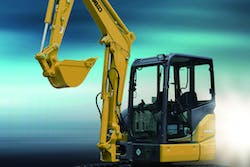 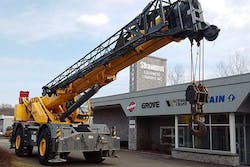