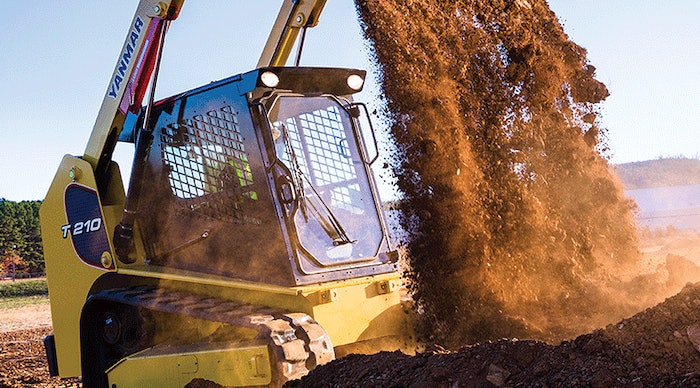 Construction spending up 0.8% in February

U.S. construction spending rose 0.8 percent in February on gains in the residential market.

Total spending rose to a seasonally adjusted annual rate of $1.2 trillion, a 3-percent improvement over the year-ago figure, according to preliminary data from the Commerce Department.

Private homebuilding rose 1.8 percent during the month to a rate of $485 billion and is now up 6.4 percent over the February 2016 figure. Spending on single-family homes rose 1.2 percent to a rate of $257 billion while multi-family rose 2 percent to $64 billion. Single-family spending is up 3.4 percent over the year-ago figure while multi-family is up 10.6 percent.

Total nonresidential spending was flat for the month at $702 billion but remains up 1 percent over February 2016 figure.

In two separate presentations April 4, President Donald Trump stressed the need for reduced regulatory steps required for infrastructure projects in order to fast track needed repairs to bridges and roads across the country.

Speaking at the CEO Town Hall on Unleashing American Business, Trump revealed a chart his staff created showing the number of approvals and statutes involved in building a highway, a process he said could take from 10 to 20 years.

“You have hundreds and hundreds of permits,” Trump said. “Many of them are statutory, where you can’t even apply for the second permit until six months go by.”

There is a story still told in the Savannah, Georgia, business community about the time equipment manufacturer JCB held a job fair for prospective employees. When the eager prospects assembled in the company’s new glass foyer were informed that drug testing would be required before they were hired, half of them left.

JCB’s corporate zero-tolerance policy may have made it harder to fill job openings, but there’s no doubt it saved them from huge problems later and resulted in a more productive, stable and healthy workforce.

Last month, we detailed all the problems this country’s drug and substance abuse epidemic has brought to the construction industry. In Part II this month, we will focus on solutions: things you can do as a construction company owner or manager to keep the debilitating influence of drugs from hurting your company and endangering your employees. We’ll also bring you up to date on the legal issues regarding legalized marijuana and how those may affect contractors who want to maintain a drug-free workplace.

Ontario-based equipment dealer Strongco Corporation has reported a 6.2-percent drop in revenues for 2016, along with a dramatic decrease in earnings before interest, tax, depreciation and amortization (EBITDA) of 64.2 percent, as it works to “streamline and stabilize” its business.

But the company feels it is correcting its management course, following a series of moves including the divestiture of its U.S. subsidiary Chadwick-BaRoss.

United Rentals says it has completed its purchase of NES Rentals Holdings for roughly $965 million in cash, a deal funded through “unsecured debt and available capacity on the company’s ABL facility.”

“We’re excited by the customer and investor benefits we’ve created through this combination, which leverages our technology, infrastructure and cross-selling capabilities,” says Michael Kneeland, president and CEO of United Rentals. “Most important, we’re gaining a great team that cares deeply about providing quality service and shares our intense focus on safety.”

The company previously announced the acquisition plan back in January. Kneeland described NES as a well-run operation that would benefit from United Rentals “technology, infrastructure and cross-selling capabilities.”

Komatsu today announced that it has completed its acquisition of Wisconsin-based surface and underground mining equipment manufacturer Joy Global.

Citing a belief that the mining industry will see a long-term rebound driven by increased demand for larger equipment in surface mining and further development of underground mining, Komatsu first announced the $3.7 billion deal in July 2016.

Though the original announcement stated Joy Global would operate as a separate subsidiary of Komatsu and would retain the Joy Global brand, Komatsu has opted to rename the 133-year-old company to Komatsu Mining Corp. Komatsu says Joy Global shares will be delisted from the New York Stock Exchange and will no longer be publicly traded.

Engine and equipment manufacturer Yanmar America has announced that it is making changes to its organizational structure that will “strengthen its customer support functions in accordance with the company’s growth strategy.”

The company is splitting its current Operations Division into two new divisions: Manufacturing and Operations. The current director of Operations, David Smith, will now lead the Manufacturing Division which will encompass manufacturing, production, quality management and procurement.

Doug Englert, the current director of the company’s Parts and REMAN division, will lead the new Operations division which will cover logistics, warehousing and facility maintenance/safety.

Caterpillar has announced that its cost reduction efforts will continue with the closure of two more facilities and the elimination of nearly 3,000 jobs.

According to a report from the Peoria Journal Star, the heavy equipment manufacturer will move forward with the closure of its manufacturing facility in Aurora, Illinois. The move will eliminate 800 jobs and require that large wheel loader and compactor manufacturing be moved to the company’s Decatur facility, while medium wheel loader production will move to North Little Rock, Arkansas.

Manitou has agreed to buy Terex’s India-based compact equipment business in a move that will expand the French manufacturer’s reach.

No specifics on the deal were disclosed but the companies say it is expected to be completed this year.

For Terex, president and CEO John Garrison says the sale is a “milestone” in establishing a new era for the company which has streamlined its corporate structure significantly in the last two years. The company has sold off all of its earthmoving equipment to various manufacturers and now serves three segments: aerial work platforms (Genie), cranes (Demag and Terex) and materials processing (Powerscreen, Finley, Evoquip).