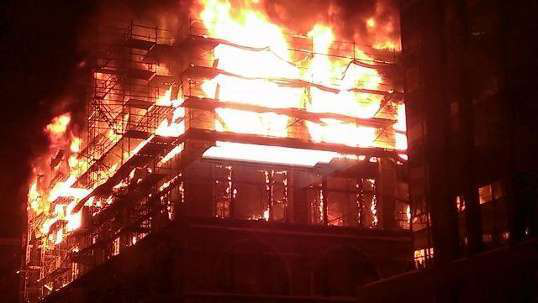 For the third time in less than a month, a large fire has destroyed a building where construction was in progress.

According to a report from KCCI TV, first reports of the fire came in around 1 a.m. Saturday as flames reached the top floors, lighting up the city’s skyline and sending up smoke and ash that could be seen for miles.

In a past life, the 115-year-old building housed the Younkers department store and a Tea Room, both beloved by residents in the city. The building was undergoing a $37 million renovation with retail and dining space that city leaders hoped would restore the building’s luster. It had been renamed the Flagship Building.

In a press conference today, Craig Hansen, CEO of the Hansen Company, the contractor working the renovation, said the company remains “puzzled” as to how the fire got started, according to another report from KCCI.

There are no leads as to what started the fire, but one theory is that the fire could have been related to “hot work”—any work where sparks are generated such as metal cutting or welding— going on at the site the afternoon before the blaze started.

Hansen officials said metal cutting was going on in two places within the structure but was completed by 2:30 p.m. and employees more than followed regulations that call for a 30-minute watch after hot work is completed. Hansen requires its employees to go on watch for a full hour after hot work.

Walk-throughs on the site at 3:30 p.m. and 5:30 p.m. the afternoon before the blaze revealed no issues or fire hazards.

Because the fire started so early in the morning, no construction workers were at the scene. However, six firefighters that responded to the call were inside the building when the fire caused part of the building to collapse, according to the Des Moines Register. Thankfully, all six firefighters escaped unharmed.

A team of 18 federal investigators including a team from the Bureau of Alcohol, Tobacco, Firearms and Explosives as well as “forensic chemists, engineers and dogs that can detect fire accelerants” were brought in to find out how the fire started, the Register reported. Officials from the Occupational Safety and Health Administration investigated the site as well.

Video of the blaze is below.