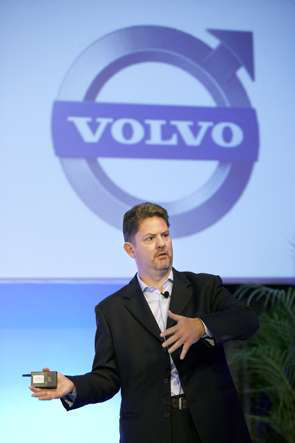 Volvo CE president and chief executive Pat Olney confirms his belief in the recovery of the North American Market at a press conference in Miami.

Olney’s confirmation of his belief in the recovery in the North American construction equipment market, which the company expects could see demand increase by up to a quarter in 2012, came shortly after Volvo CE posted a 111-percent increase in like-for-like sales in North American revenues in the first quarter of 2012, compared to sales a year ago.

The increase in Volvo CE’s North American sales during the quarter helped the company to a 17-percent increase in global net sales and to post record levels of profitability for a first quarter.

Olney also discussed some of Volvo’s products such as Volvo CE’s Stage IIIB/Tier 4i emissions compliant range of engine systems and more than 60 fuel-efficient products the company plans to introduce globally in 2012. These products are part of Volvo CE’s WWF Climate Savers commitment to reduce CO2 emissions from its machines sold between 2009 and 2014 by 15 million tonnes.