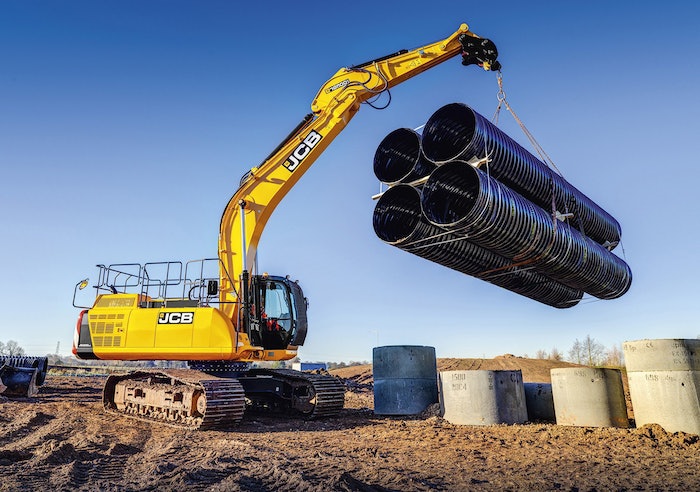 For the first time, MTU will be supplying engines for use in excavators, having won an order from JCB. In the picture one of the three new excavators, the JS 300.
Mit dem Auftrag von JCB liefert MTU erstmals Motoren für Bagger. Im Bild einer der drei neuen Bagger, der JS 300.

JCB is making a change when it comes to the engines inside its three largest crawler excavator models.

The U.K.-based construction equipment manufacturer has decided to award Germany’s Rolls-Royce Power Systems with an order for MTU Series 1000 engines to power the JS300, JS330 and JS370 excavators.

These machines were previously powered by Isuzu engines.

JCB says it will unveil a new JS370 model at ConExpo next month powered by the MTU 6R 1000.

Though the move will mark the first excavators to be powered by Rolls-Royce engines, it represents the expansion of a partnership between the engine maker and JCB that includes use of the same 6-cylinder Series 1000 engine in JCB’s 457 wheel loader.

Manitou, Mustang and Gehl wasted no time unveiling the many models they have to offer this year at an “Unlock the Future” event.

“For the past multiple years, most all of our competitors, as well as with ourselves, had to try to get in conformance with the EPA regulations – with the engine compliance – and a lot of our engineering resources have been totally tied up in that side of the business,” said Eric Burkhammer, vice president of sales and marketing for the North American Manitou Group. “Now, we’re finally reasserting ourselves as a main player.”

The output and performance from these new hydraulic pumps is equal to the standard side engine package on the M310 paver, Bergkamp says.

Terex Trucks, exhibiting as a stand-alone brand at ConExpo, will launch its Generation 10 truck to North America at the show.

The truck had its global introduction at last year’s Bauma trade show in Munich, Germany, and was showcased as the division’s first new product since Volvo Construction Equipment purchased the division from Terex in 2014.

The 41-ton Generation 10 TA400 is a Tier 4 Final hauler made in the Terex Trucks plant in Motherwell, Scotland. The truck has upgraded hydraulic and electrical interfaces, a new drop box, improved aesthetics and telematics.

Using feedback from concrete contractors, Wacker Neuson engineers designed the chute, which along with the dumper’s bucket shape, gives users the ability to transport and place concrete with less spilling.  The company shaped the metal chute with high side walls to avoid spilling, and the narrow-shaped front allows precise pouring into a desired location, reducing concrete splatter.  The machine’s bucket has higher walls that are tapered inward.

In addition – compared to a conventional concrete buggy, which typically tops out at capacities of 21 cubic feet – the dumper allows users to transport 40 cubic feet of concrete per load. With a maximum speed of 14 mph, the dumper also can reduce concrete placement cycle times. The machine’s small footprint reduces the risk of rutting. Adding optional turf tires enables the dumper to let finished surfaces remain undisturbed.