Now that crews are well into the process of dismantling her front-end for necessary repairs, it’s clear that damage to Big Bertha, the world’s largest tunnel-boring machine, is worse than previously thought.

STP and the Washington State Department of Transportation previously thought the damage was contained to seven rubber seals meant to protect the machine’s main bearing becoming clogged by sand and water. But now, the Seattle Times reports the steel casings around the seals actually “broke apart, sending fragments into the drive gears.”

Plus, some of the teeth in the machine’s bull gear, which rotates the drill face, were cracked as well as several pinion gears, the paper reports.

Despite the fact that damage is more extensive than previously thought, repairs likely won’t take longer than expected because those parts were ordered and planned for replacement anyway. So, the delay in resuming work can likely be blamed on too aggressive of a timeline set by STP.

And while crews work to get the drill back in working order a dispute between STP and the WSDOT continues to play out over who is at fault for the machine’s downtime.

Earlier this month, a dispute review board ruled in favor of STP, agreeing WSDOT should have given the contractor more warning about a large steel pipe hit by Big Bertha three days before it stalled. Since January 2014, STP has contended that the pipe is the root cause to the machine’s overheating, putting it nearly two years behind schedule.

However, WSDOT argues Bertha’s extensive downtime has more to do with shoddy craftsmanship by Japanese manufacturer Hitachi-Zosen than the pipe. 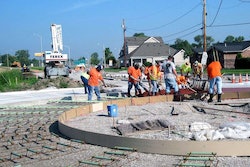