Hilti has announced its entry into uncharted territory for the company in the unveiling of a new exoskeleton—the EXO-01—that it will bring to market later this year. In the video below we explain the types of exoskeletons, what they’re for, how the EXO-01 works, and what research says about the effectiveness of exoskeletons in construction work.

Exoskeleton. What comes to mind when you hear that word? Bugs? Superheroes? What about construction? Or manufacturing?

Those last two are decidedly less exciting than Iron Man and obviously less creepy than a spider shedding its own skin. Instead, the real-world. human-worn exoskeletons of today and the near future are much more practical. They’re more about preventing fatigue among workers and less about making you bulletproof or allowing you lift a car.

Hilti’s new EXO-01 exoskeleton is not just a new product it’s big news. That’s because while there are several entities who have been hard at work trying to make exoskeletons a thing in industrial applications—companies like Ekso Bionics, Levitate, SuitX, not to mention the U.S. military and many others—this is the first entry into the exoskeleton market  by a well-established, highly respected industrial player.

Hilti has been making tools and servicing the construction industry for nearly a century. If they are throwing their hat into this ring, it’s a ring worth watching.

Before we go any further, it would probably be useful to fully explain what we mean when we talk about an exoskeleton, because at present there are primarily two types being developed for industrial use.

The first—and the one Tony Stark is more fond of—is the powered or active exoskeleton. These feature batteries or some other form of power generation—usually batteries— in order to fuel motors and actuators that move with your arms and legs and, in essence, provide you with much more strength than you actually have. They’re essentially robotic suits operated by your natural movement. Think of it as another set of arms, or two, or three, moving in perfect sync with your own and multiplying your strength.

These powered models have been in active development for years, but their added weight, bulk and expense have held them back from going mainstream.

The second type is the passive exoskeleton. These don’t have any batteries, motors or actuators. Instead, you can think of these as a really large wearable brace. They’re designed to keep your body in proper alignment while also providing more support to your limbs and muscles to ensure that repetitive tasks don’t tire you out over the course of a day.

So instead of more arms pushing with you like you’d have with an active suit, the passive suit is kind of like a considerate buddy supporting the weight of your arms while you raise a screwdriver or drill above your head for like the thousandth time that day.

In a way, these passive exoskeletons end up delivering some of the benefits of their powered counterparts but in a much lighter, and less expensive package.

That’s where Hilti’s EXO-01 comes in. 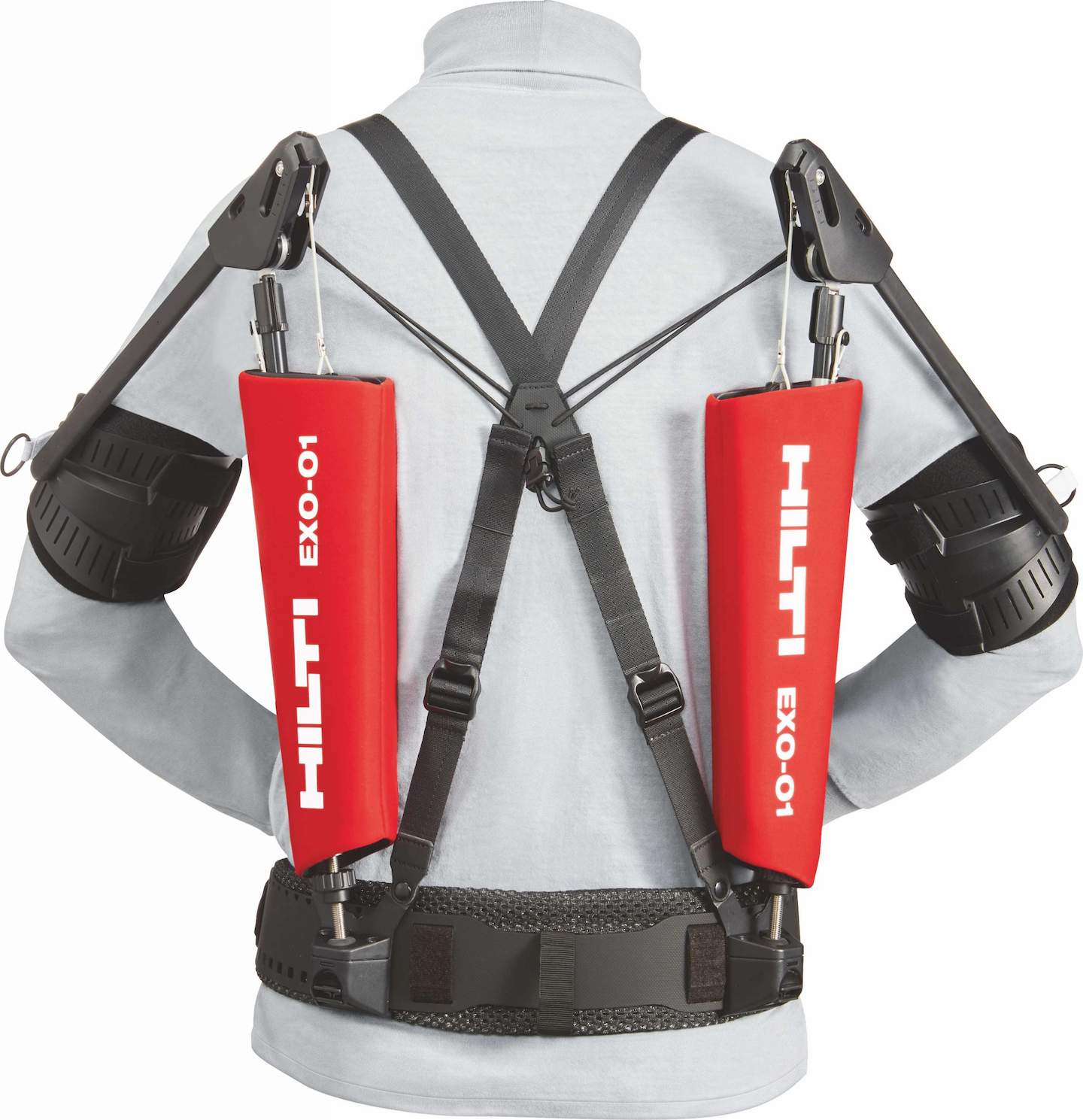 This is obviously a very different and new category that Hilti is entering, so it has decided to do so with a partner. Hilti is developing its exoskeleton with Ottobock Industrials.

It’s a pretty interesting partnership. As we said earlier, Hilti is a proud and long-standing company with more than three quarters of a century of experience. Ottobock celebrated a century in business back in 2019 and are well regarded for groundbreaking work in prosthetics—including innovative work that combines prosthesis and robotics—wheelchairs and, of course, exoskeletons.

The Hilti EXO-01 was developed under this new partnership between Hilti and Ottobock and it’s a passive model that is really designed to alleviate stress and strain from workers who perform a lot of shoulder level and overhead work.

The frame of the EXO-01 cradles your hips while two prominent pillars extend, one from each side, from the hip brace up to joints that sit just below your shoulders. From those joints another frame extends behind your deltoids and triceps and into a fastener brace at your elbow.

Inside those red pillars is a cable system that allows those arm bracings to move with you while working to transfer the weight not only whatever you are holding, but also the weight of your arms themselves, out from your neck, shoulders and back, and instead down to your hips—closer to your center of gravity, but also a very strong and stable part of the body. 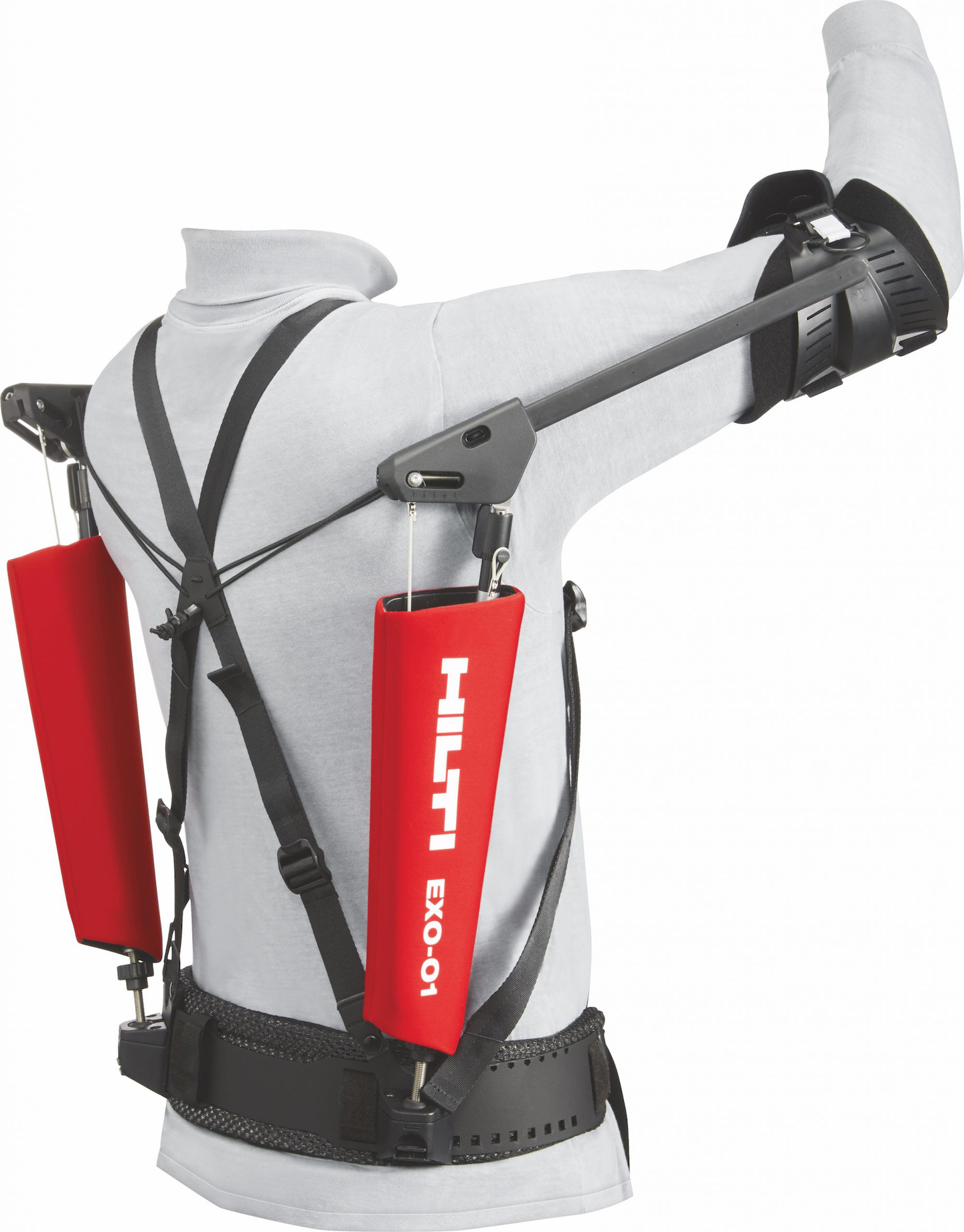 Given that this exoskeleton is all about making shoulder height and overhead tasks less fatiguing, it totally makes sense that Hilti is working to develop something to sell alongside a myriad of tools that you often use overhead or at shoulder height. Plus, the company has a long track record of trying to make its tools themselves more ergonomic, lightweight and less straining to use.

The problem exoskeletons are trying to solve

So, how big is the problem that exoskeletons are trying to solve within the construction industry?

Musculoskeletal disorders—things like lower back pain, sprains, arthritis and other injuries that are caused by repetitive strain on your body—are a leading cause of injury in construction work, and that’s according to a brief from the CDC examining whether or not exoskeletons are a feasible tool in combatting injury and fatigue.

In fact, the CDC says the rate at which musculoskeletal injuries occur in construction is 16 percent higher than all other industries combined.

Of the musculoskeletal injuries that occur in construction, more than one-third are caused by lifting, according to the CDC brief. The most prevalent injuries are back injuries, but shoulder and joint injuries are also considered major causes of injury.

Unfortunately, and as the CDC notes in this brief, there’s not a ton of research out there to find when it comes to studying how effective exoskeletons are in the field. Even the CDC brief I’m citing is more than three years old now. Apart from it, I was unable to find much else in terms of reputable sources advocating the efficacy of these devices.

But the CDC brief does point out a few studies in its brief. For instance, two separate studies in France focusing on overhead lifting or tool use came to opposing findings on exoskeletons. One study focusing on overhead load assistance found that the exoskeleton in use for the study actually created additional resistance for the worker to deal with.

The other study, which focused on holding a tool overhead for plaster installation, found that the exoskeleton succeeded in decreasing a worker’s strain while also causing “certain types of pain” to “disappear.” And that’s certainly a positive finding for exoskeleton’s like the EXO-01 which are designed for that type of work exactly.

The CDC also notes that here in the U.S. most of the work and research into exoskeletons up to this point has been performed by the Defense Department. One study, performed with the help of workers at a Naval shipyard, found that an exoskeleton provided a “10 percent increase in productivity, a reduction in vibration of the hands, and improved quality of work.”

The right tool for the job?

So despite the fact that the idea of a robotic exoskeleton has been a sci-fi dream from more than half a century, this is still a market very much in its infancy. We simply don’t know much about these devices or much about exactly how helpful they are.

Ottobock, the company Hilti is partnering with on this new exoskeleton, says that its experience is built on more than 500 exoskeleton products. The company says the EXO-01 could reduce the load on the arm muscles and shoulders by up to 47 percent. That’s a potentially huge help for folks that work with their hands above their head on a lot of days.

However, as the CDC brief points out, there are potential risks to exoskeletons as well. We mentioned their bulky nature earlier, though that appears not to apply to the EXO-01. But there are concerns among safety experts that the support exoskeletons provide could mean unnecessary bulk and resistance in the event of an accident where a worker needs to quickly move out of the way of a falling object or if he or she loses their balance.

Then there’s the issue of comfort. Will you have to trade comfort for this reduced strain? Will that be more mentally fatiguing over time than normal strain? For its part, Hilti says the EXO-01 will offer workers virtually full range of motion while wearing the exoskeleton, and since it’s worn like a backpack, it should wear and feel pretty naturally. They even note that you might not even have to remove it to use the bathroom.

Again, there’s a lot we don’t know simply due to the fact that these aren’t in widespread use yet.

The aim of exoskeletons like Hilti’s are built upon a decidedly worthy aim, however. And Hilti’s entrance into the space will likely provide a nice boost to the market’s advancement not only in terms of development, but in adoption and recognition as well.

The Hilti EXO-01 is slated for release in the fall of 2020. So very soon, we’ll also start to get some very real world understanding of just how effective an exoskeleton can be. In terms of cost, Hilti hasn’t shared any pricing specifics as of yet, but the big selling point on any exoskeleton system is that it will reduce fatigue, reduce injuries and apart from giving you hopefully healthier, happier, more productive workers, also lead to a reduction in workers compensation costs.