Editor’s note: We’re excited to introduce Collector’s Corner, a new ongoing series of articles by Equipment World in which collectors of antique construction equipment and construction models talk about their favorite finds. If you’ve got a special piece of vintage equipment or a model you’d like featured, email Don McLoud at DonMcLoud@randallreily.com.

Matt Veerkamp was on a parts search 13 years ago in Arbuckle, California, when he was asked to take a look at a rusty old Caterpillar Twenty.

Matt wasn’t too excited about the offer, but that changed when he saw the tractor. The serial number stamped on the transmission case and the engine block read, “EXP 0000-L.”

Matt called his father, Doug, with the information.

After the tractor arrived at the Veerkamps’ home in Placerville, California, where the two run Doug Veerkamp General Engineering, Matt started researching and confirmed they had something special.

“And by golly, it was the first brand of Caterpillar tractor of the new company,” Doug says.

The Twenty, so named because it was 20 horsepower, was built in 1926 after the C.L. Best Tractor Company and the Holt Manufacturing Company had merged the year before to form the Caterpillar Tractor Company. Not only was it Caterpillar’s first tractor to be built entirely off its new design, it was the company’s exhibition model, which it showed at county and state fairs and other venues to gin up interest in the new product.

Once they began to restore the tractor, the Veerkamps made other discoveries.

“It was in pretty rough shape and had been painted Cat yellow,” Doug says. That wasn’t the original color.

“The Caterpillar colors back then were gray and red,” Doug says. “But they painted this one white because of the specialty of what it was.”

As they kept scratching, they also discovered nickel and brass plating in many places.

“It was pretty cool to find all that under the old yellow paint,” Doug says.

After about four months, the Twenty was as good as new.

“We took it down to the last nut and bolt and overhauled the engine and redid virtually everything and made it into brand new condition,” he says. It runs smoothly, “just like it was a new tractor.”

It is powered by a 4-cylinder gasoline engine and is started by a hand crank on the front of the radiator. “It was quite a hit back in the day, because it sure beat the heck out of horses and mules,” Doug says.

The Veerkamps often get offers on the Twenty, including one from Caterpillar, but they’re not interested in selling. Doug hopes it will stay in the family for generations.

“It’s a one of a kind, the first Caterpillar tractor ever built,” he says. “It’s a very, very, very unique piece.”

Got an antique piece of construction equipment you’d like to share with Equipment World readers or know someone who does? Email DonMcLoud@randallreily.com. 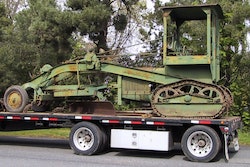 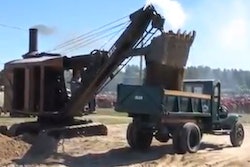 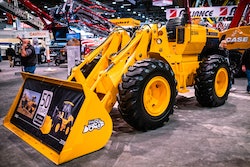