Doug and Matt Veerkamp, the father and son who head the 200-employee Doug Veerkamp General Engineering in Placerville, California, have been collecting for years, specializing in antique Cat machines, in addition to the machines manufactured by Holt Manufacturing and C. L. Best, the two companies that merged in 1925 to become Caterpillar.

“I’ve always been kind of a tractor kid,” says Matt, now 35. Although Doug, 61, started the collection, when Matt got involved “it kind of took off,” he says. Because Matt is a student of Cat literature – former sales brochures, catalogs, ads, etc. – he’s able to spot the gems unrecognized or undiscovered by others. “I love finding a rare piece of machinery, something good that’s worth something,” he says.

The stories behind two machines included in the CVC display detail this passion for the rare find. Seeking parts for a Best Sixty that was already in the family collection, Matt went to the Traynham Ranch in Arbuckle, California. Seeing Matt’s intense interest in all things Cat, ranch owner Roy Traynham asked Matt if he’d be interested in a Cat Twenty. Matt was unenthusiastic about a regular Twenty, but agreed to see the machine. He struck gold: before him was the 1926 EXP 0000-L Experimental Twenty, since verified to be the first new machine produced by the newly formed Caterpillar.

Originally painted white trimmed in black, Caterpillar used the EXP 0000-L as a demonstration machine at state fairs. Since Traynham’s wife is a direct descendant of C. L. Best, the machine eventually ended up at the Traynham ranch doing miscellaneous jobs and masquerading under a yellow paint job.

“This tractor was like nothing I’d seen before,” Matt says. Matt took the Twenty home, restored it to its original white, later writing about his experience in the Antique Caterpillar Machinery Owners Club (ACMOC) magazine. Caterpillar first displayed the EXP 0000-L in its 2011 ConExpo booth (see video below).

More about the delivery

When it comes to the Veerkamp’s 1919 Best 25 on display at the CVC, however, the story is less about the discovery and more about the delivery. Matt spotted the machine on the ACMOC bulletin board after hearing about it from another enthusiast. A member had posted pictures of an abandoned mine site in the Simi Valley hills of southern California – pictures that clearly showed a rusting Best 25. But how to extract it from what turned out to be government-owned land?

Getting the governmental permission to remove the machine actually turned out to be the easy part. Getting the machine down off a mountain top proved much more challenging. In gaining governmental permission, Matt had promised not to disturb the land during the extraction process. “Using a helicopter was the only way to get it out,” he says. Hiking to the abandoned mine site, Matt and co-worker/fellow Cat enthusiast Shawn Stover each carried more than 60 pounds of gear – including bottle jacks, wrenches, sockets and come-alongs — up a 1,100-foot climb. Since the helicopter pilot felt he could only comfortably carry a maximum of 4,000 pounds, two lifts were required for the estimated 5,200-pound machine: one for the engine, and one for the chassis. To prep for the task of separating the engine from the chassis, Matt earlier had visited a nearby museum that had a Best 25 on display. There, he says, he crawled all over the display machine “to get a complete understanding of the tractor that awaited me,” he recalled in a story he wrote for the ACMOC magazine.

Planned to the last detail, both lifts went off without any major hitches and the Best 25 was down the mountain and into the shop. Matt then worked with former Veerkamp employee Jim Chapman to restore the Best 25 to working condition, and decided not to paint the tractor. “Early in the restoration process we all agreed that we would leave her in the appearance of when we found her,” Matt said in a story on Cat’s website. “You can’t buy that patina.”

Five other Veerkamp machines are also on display at the CVC. Here’s a history capsule on each machine, according to a CVC brochure:

A modified version of the Caterpillar Sixty, this machine was produced in response to growing demand from the logging industry. Sixty Logging Cruisers were sold worldwide and this particular machine, produced in 1930, was used in a logging operation in the state of Washington.

Cat’s first diesel track-type tractor, this machine was released during the height of the Great Depression. Cat spent an impressive $1 million-plus at the time on the machine’s research and development, promoting it as a direct descendent of the Best and Caterpillar Sixty tractors. Two years after its release, Caterpillar produced more than half of the diesel engines in the world.

This was final machine designed by Holt Manufacturing before it merged with C. L. Best to become Caterpillar. Designed during World War I, it was first painted green, and eventually ended up in an agricultural application. “The engine serial number is 1, making it the prototype of a long line of machines produced until 1928, when Caterpillar began production of their smallest tractor, the Model Ten,” says Matt. The Holt T-35 Prototype was later renamed the 2-Ton and became part of Caterpillar’s first product line in 1925.

Grandfather of the Cat D8, this machine was first produced in 1919 by the C.L. Best Gas Traction Company. Designed by Caterpillar’s first chairman, C. L. Best, this tractor was featured in both the Best and Caterpillar product lines. The Best 60, and its descendant, the Caterpillar Sixty, operated throughout the world and worked on such notable projects as the Hoover Dam and the Hollywood Sign. “The Caterpillar Sixty is really the cornerstone of early gasoline tractors,” Matt says.

The Veerkamp collection will be on display at the center through June 20, 2018.

If you miss the CVC display, you might be able to wrangle an invitation to view the entire Veerkamp collection first hand. Every two years, Doug and Matt open up their Placerville, California, warehouse, and host an antique machinery parade. “Six hundred people showed up to the last event,” Matt says. “We’ve held it three times now, and it keeps getting bigger.”

For more on the Veerkamp collection, view this Caterpillar video from a few years ago:

The 1929 Cat EXP 0000-L Experimental Twenty was a star at Caterpillar’s 2011 ConExpo exhibit, which you can view here: 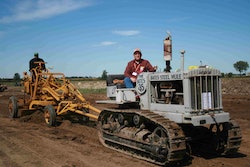