While JCB’s Bauma headliner was the wheeled Hydradig excavator—expected to make North American shores next March during ConExpo—it did have a number of wheel loader introductions at the show that will be seen in North America this year.

Before we dive into the North American machines, however, let’s take a quick look at the Hydradig, which JCB previewed to the European trade press a few weeks before the show. One of Hydradig’s main distinctions is the placement of the engine and tanks in the chassis instead of within the upper structure.

The company says this gives the operator the ability to see all four wheels from the driving position, lowers the center of gravity for more stability, and reduces the counterweight and tailswing for increased obstacle avoidance.

The 109-horsepower twin-articulation-boom machine can tow 7,716 pounds at a maximum of about 25 mph, giving it the ability to trailer attachments and other jobsite tools. For more on the machine, click here. To see the machine in action, check out this video.

And here are the loaders we’ll see on these shores from JCB in the coming months:

The 108-horsepower 411 and 125-horsepower 417 models are powered by JCB EcoMax engines. The larger 179-horsepower 427 and 183-horspower 437 loaders use a Cummins engine. Both engines meet the latest emissions standards without the use of a DPF.

First seen on the larger 457 loader model, the CommandPlus cab uses a ROPS structure that moves the cab’s A pillars out to the same width as the rear of the cab, giving the machine a panoramic front windshield.

Switches and auxiliary controls are located on the right-hand A pillar. A full-color LCD screen displays the loader’s operating menu and becomes the rear-view camera when the machine is put in reverse.

Using the CommandPlus Control system, the operator can adjust auxiliary flow rates on the display screen, adjust optional SRS boom suspension engagement speeds and control the timing of the cooling fan reversal to clean out the cooling pack cores. 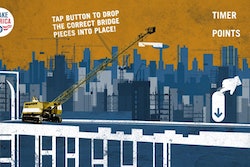 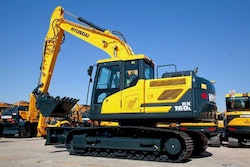 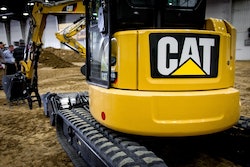