Ryan Whisner
Jan 17, 2023
The 136MRail is ideal for light to medium service and maintenance jobs both on and off rails with its lifting, towing, and loading capabilities.
Mecalac

Mecalac recently announced the North American launch of its 136MRail railroad excavator, the second of its MRail series.

"This model was designed to be the go-to machine for Class 1 railroads, light rail and industrial rail operations," said Peter Bigwood, general manager of Mecalac North America. "The 136MRail is unrivaled in its compactness-to-performance ratio, speed and versatility.”

Attachments such as grapple buckets, tie-removers, power brooms and trenching buckets allow operators to accomplish a variety of tasks around rail systems.

Based on Mecalac’s compact skid excavator concept, the machine combines all functions of a compact loader and an excavator, bringing the speed of a loader and the 360-degree rotation of an excavator. According to Bigwood, the 136MRail is a state-of-the-art excavator in terms of lifting, towing and loading capabilities with a factory-integrated hi-rail.

Able to move on and off rail with ease, the 136MRail is equipped with an optional pneumatic brake system and can tow up to 14-ton trailers. The machine’s travel speed on rail is 12.4 mph, and off rail is 5.6 mph.

With its rail gear raised, the 136MRail can be operated as an excavator on regular terrain.

At 13 tons with a 75-horsepower engine, Bigwood said, it is ideal for light to medium service and maintenance jobs.

Unlike traditional rail excavators, the 136MRail and 106Mrail provide a two-piece boom on the side of the cab to allow the operator to angle the first part of the boom back to increase stability during lifting, which enhances safety and production, particularly for those working in confined spaces such as tunnels. The boom incorporates an offset feature for applications, such as ditch-cleaning alongside the tracks.

Bigwood said productivity is further driven through a 1-cubic-yard skid loader bucket that provides 72% more capacity compared to other machines of its size. Like the 106MRail but with added capacity, the 136MRail can scoop and load ballast or unload and spread ballast on the track.

“We set out to revolutionize railroad excavators with our MRail Series,” Bigwood said. “As these machines are brought to the North American market, we are excited to hear about the positive impact they will have on our customers’ operations and confident they will prove a valuable addition to their equipment fleet.” 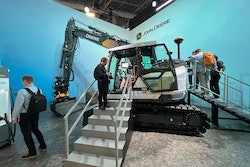 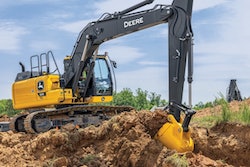 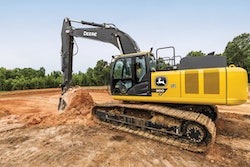