With 20 machine debuts at Bauma, LiuGong aims to be a Top 10 construction equipment maker

“The shift from ‘made in China’ to ‘created in China’ has inspired LiuGong to accelerate innovation in science and technology with the aim of becoming an industry leader,” says Guang’an Zeng, chairman, LiuGong Group and LiuGong Machinery, in remarks made Monday at the Bauma trade show in Munich, Germany.

One way of doing this is placing an emphasis on using global talent; for example, Kevin Thieneman, from North America, has been named the company’s new vice president of global strategy and aftersales. The company opened up a new European headquarters in Warsaw, Poland, and increased its European production base for excavators and wheel loaders, now being produced alongside Dressta dozers and pipe layers.

Zeng also said that the company is working on an electric-powered wheel loader and compact excavator and intends to launch them in China next year.

LiuGong and Dressta are showcasing a 20-machine line up at Bauma, including nine machines making their global debut at the show. These include:

Due to a five-post cab with a single C-pillar, the LiuGong 410D motor grader, pictured above, has a 324-degree in-cab visibility which the company calls best-in-class.

The grader recently won a Red Dot product design award. “All of the controls have been repositioned ergonomically, the amount of stretch  required has been designed for minimum efforts,” says Howard Dale, chairman of LiuGong Europe. The grader can also be retrofitted for a machine control system.

Designed for rental applications, the compact radius LiuGong 909 ECR excavator, uses a variety of attachments, including buckets and hammers. The 19,621-pound machine is powered by 59-horsepwoer engine.

Liugong’s 950 demolition excavator was designed with partner Kocurek UK and features a 98.4-foot-long reach boom, which “allows the 950 to punch above its weight,” says LiuGong.

The change from high reach equipment to standard equipment – and vice versa – can be done in 30 minutes or less. The cab is modified from a standard machine by replacing the front window with a five-layer laminated glass and extending glass to the roof.

The front and roof glass are joined to the front screen to give operators additional upward visibility.

The Dressta TD-15 dozer has been completely redesigned to make it compliant with European Stage V emission standards. 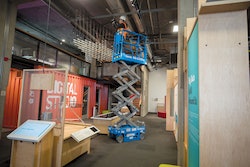 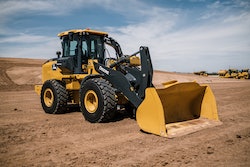 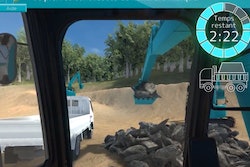 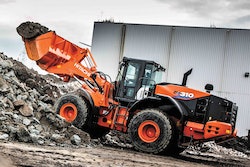