Just a few feet away from Kid Rock’s stacked, American-flag-draped Silverado 3500 dually at the Chevrolet booth at this year’s SEMA show was another truck that hunters and fans of the show The Bone Collector will get a kick out of.

Using a black Silverado 1500 High Country crew cab with 4WD as the base, the Chevy Realtree Bone Collector concept truck features a woodland camo paint scheme with green accents. There’s even a storage vault in the bed that works as a gun safe.

“It’s just a sweet, cool truck that can do anything when it comes to the outdoors,” said Michael Waddell, the “Bone Collector” star whose signature graces the side of the pickup. Note too that this is the next-generation Silverado, boasting a front-end redesign just two years removed from the design refresh Chevy introduced with the 2014 model year.

We’d only seen one official photo from Chevy of this new front end shape, so it was a bit hard to draw any conclusions. But after seeing it in person, we’re fans. The black base used in this Bone Collector Silverado really plays to the new design’s strengths as do the blackout headlamps Chevy used.

Further Chevrolet aftermarket parts include a bull bar and sport bar with an LED light bar and a performance exhaust system. The brakes are a concept design that Chevy worked up with Brembo and use oversize rotors and six-piston caliper.

The truck is powered by a 6.2 Liter EcoTech V8 with 420 horsepower and comes as you might expect, with the Z71 off road package. 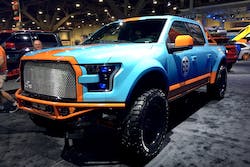 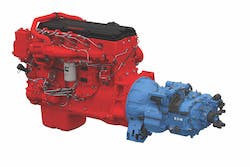 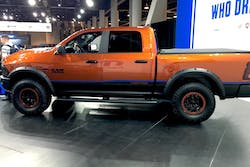 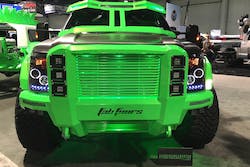