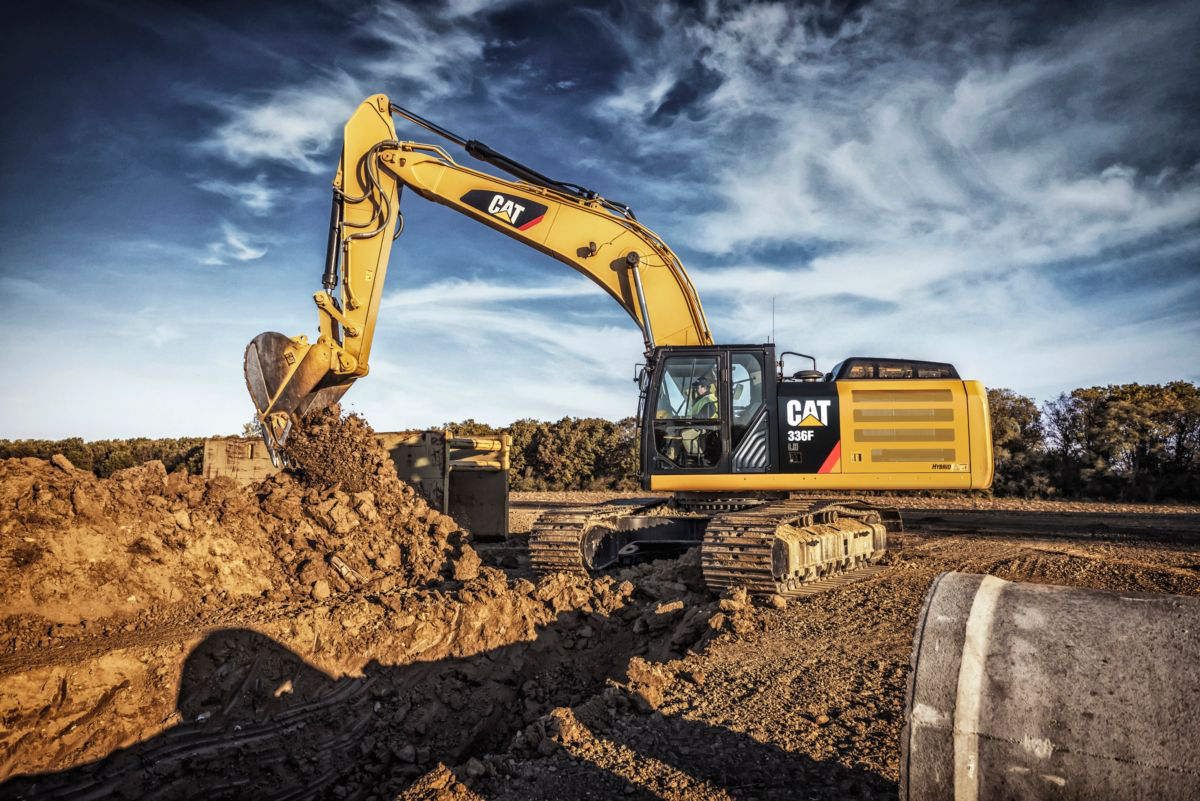 The new Caterpillar 336F H hybrid excavator will make its debut at ConExpo this week.

If there’s one word that Caterpillar wants you to take away from this year’s ConExpo it’s “technology.” And the equipment manufacturer had plenty of it to show off in a pre-ConExpo press event that included the unveiling of an update to its hydraulic hybrid excavator.

The 336F H contains the same three-part hydraulic hybrid componentry as the E Series hybrid, but with a software update. Brian Stellbrink, product application specialist, says F Series prototypes are realizing even more fuel savings than the 25 percent seen in the E Series, but declined to give specifics.

Cat says it’s not only continuing the hybrid approach in the 336F H excavator, it’s also parceling out some hybrid components into standard machines.

For example, the 336F standard machine now has the Adaptive Control System, as does the 202,873-pound 390F. In addition, the 336F will offer an optional Cat Production Measurement, which measures bucket payload, total payload and number of passes.

Other F Series excavators debuting at the show include the 192- horsepower 335F CR (for compact radius) and the 156-horsepower 323F.

Cat’s new 910K compact wheel loader – positioned between the 908 and 914 sizes – is aimed at municipalities. Both the 910K and 914K units offer Cat’s Optimized Z-bar linkage, combining the breakout force of a Z-bar linkage with the parallel lift of a toolcarrier.

Cat previously announced several products it will have on display, including its M Series wheel loaders and M Series 3 motor graders.

From rain-shorted machine demos to machine introductions to a customer interview, the message was clear during Cat’s press reveal yesterday: if contractors aren’t making use of all of today’s technologies both in and around machines, they’re not only losing a significant leg up over their competitors, they may even be at a competitive disadvantage.

Take Timmy Hall, owner of Timmy Hall Timber and Construction, Robertson, Alabama, for example. He says he’s been able to grow his road construction firm from $20 million to $40 million in the past two years, something he lays entirely at the feet of technology. “When I get a bid, my competitors wonder how I can do it for my price,” he says. “With hybrid equipment and the fuel savings it offers, we’ve got to use that to our benefit.”

Earlier, Cat announced its Cat Connect technology suite would offer a unified telematics approach for customers with mixed fleets. Working with partner Trimble, Cat’s approach is designed to give customers a one-stop source for telematics, whatever the fleet size, according to John Thomas, construction technology marketing and strategy manager.

Several information pieces—including telematics, grade control, payload and tire monitoring—from all connected machines, regardless of brand, would feed into Cat’s VisionLink system. “We’re trying to simplify how we talk to customers to make it less intimidating,” Thomas said. “And we have to provide solutions that both work on older Cat machines and machines that don’t say Cat on them.”

To emphasize this all-fleet approach, Cat’s customer demos at its Tinaja Hills proving grounds in Arizona this week will show competitive machines along with a phalanx of new Cat products.

And because fuel savings has become such a key customer metric, Cat issued a side-by-side comparison of the fuel efficiency of 12 popular Cat machines with head-to-head competitive models, based on internal production studies.

Defining fuel efficiency as the amount of work done by the amount of fuel used, Cat conducted 75 model specific tests, and said it came ahead in 95 percent of the results. “Fuel is the largest expense in operating costs,” said Jim Stettner, product application manager, global construction and infrastructure. “Fuel efficiency clearly matters to our customers.”

Working under the “Build for It” theme, Cat’s Conexpo presence includes three booths this year, located in the North and South Halls and Gold Lot. The South Hall product support exhibit – aimed at “do it myself” customers, will feature two Tuesday appearances by Mike Rowe, at 11 am and 1 pm.