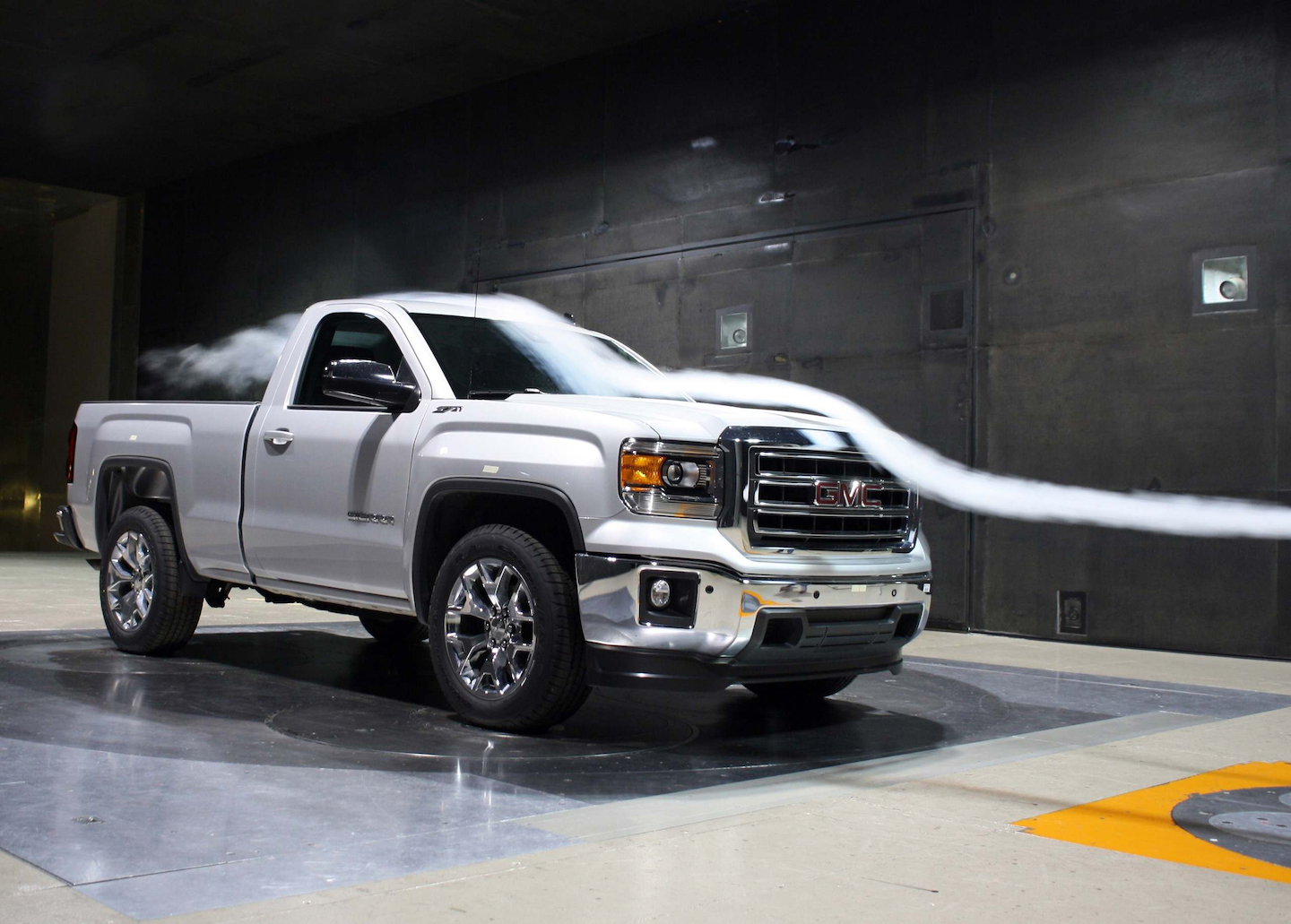 When you view the 2014 Chevrolet Silverado and GMC Sierra side-by-side with the 2013 models, one of the first things you notice is that they look bigger. There’s more bulk in their new front-end designs.

So it might come as a surprise to hear that these new trucks are actually more aerodynamic than their sleeker predecessors. What looks like bulk is actually attention to detail by the company’s designers.

General Motors recently detailed the painstaking aerodynamic engineering process that went into improving fuel efficiency and interior quietness on the new models. According to GM, the 2014 models spent more time in development in the company’s 750-foot-long wind tunnel than any GM pickups before them.

In crude terms, GM’s wind tunnel is a long tunnel with a very large fan at one end, powerful enough to generate winds up to 138 mph. The path that the wind takes around the car is highlighted by what looks like smoke in the pictures provided here by GM.

“We can’t stop air; we can only guide it through the path of least resistance. It’s like electricity, without the shock,” Bloch said in a prepared statement. “The biggest misconception is that it’s all about single components. But a certain side mirror design doesn’t create a certain amount of drag, its interaction with the rest of the vehicle does.” 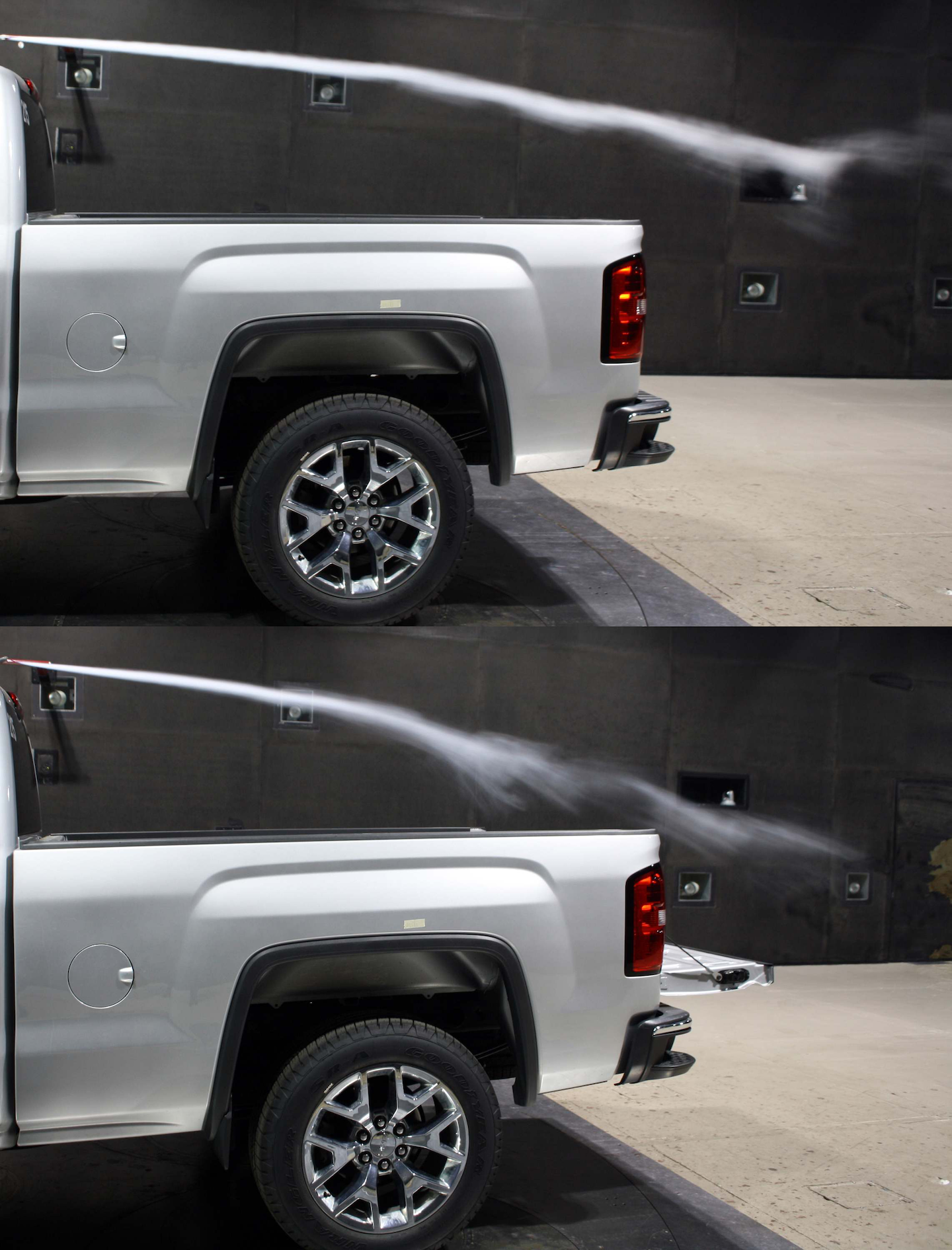 This side-by-side photo shows air being disrupted negatively with the truck’s tailgate down.

The biggest myth GM addressed is whether or not a raised or lowered tailgate helps or hurts aerodynamics, and therefore fuel consumption. Contrary to popular opinion, Block says a tailgate in the upright position actually creates less drag on the truck. According to GM, “As air flows over the truck, it falls over the cab and pushes forward on the rear of the truck. With the tailgate down, the benefits of that airflow are diminished.”

In fact, Bloch says that replacing the tailgate with a net is worse than having no tailgate at all because the net actually creates more resistance to the wind. “Imagine dragging a solid object and a fishing net through water. The net is going to require more muscle.”

Using research on the tailgate, the GM team says it even optimized the stop light on the top of the 2014 Silverado/Sierra’s tailgate in order to guide air around the truck more efficiently.

A design element in the 2014 1500s that reduces drag is a new air dam below the front bumper, pictured below. The dam directs air toward the ground and away from the underbody. Meanwhile the trucks’ ducted flow path, located between the grille and radiator, prevents air from swirling inside the truck’s front cavities. 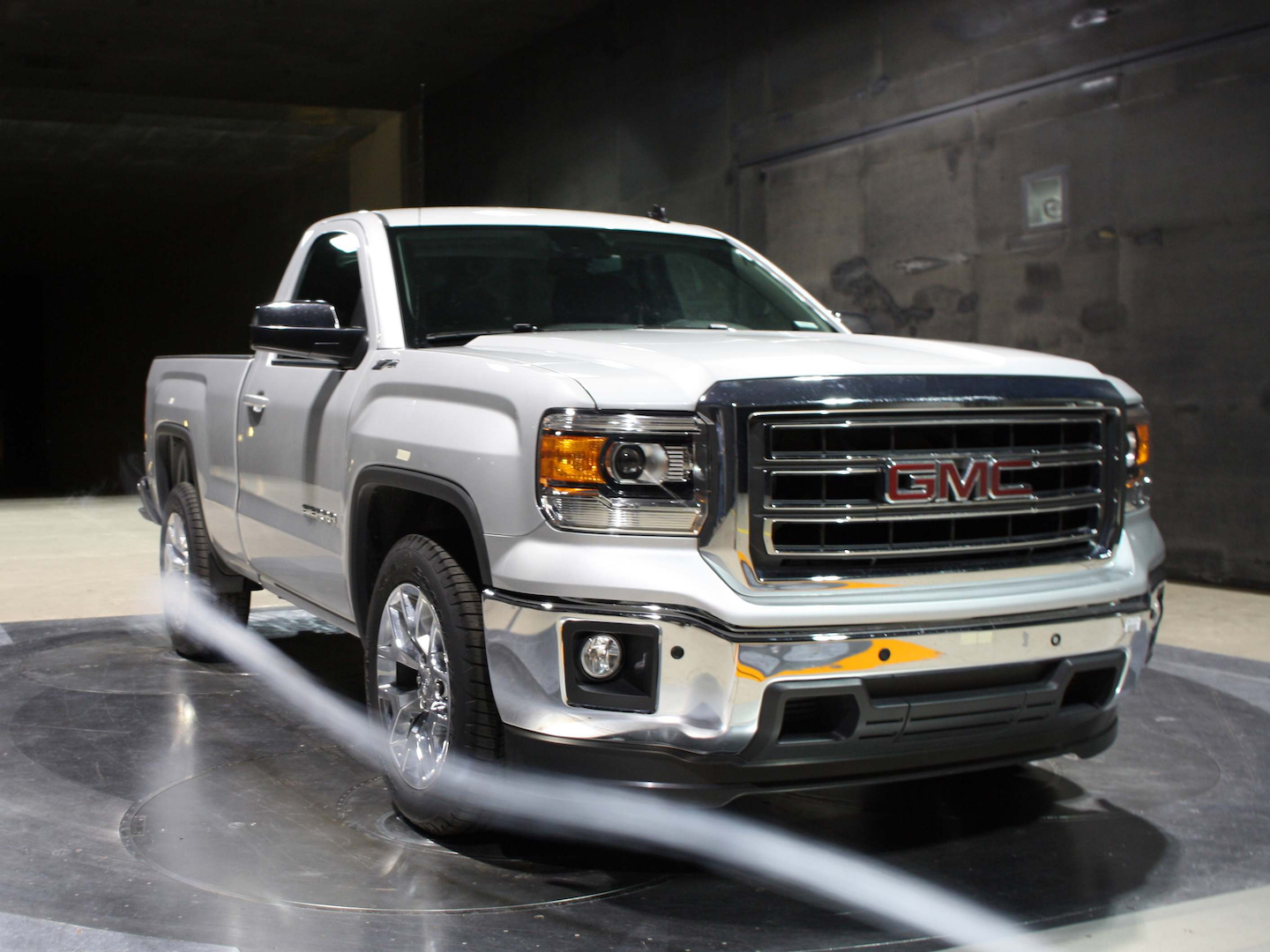 The 2014 GMC Sierra’s new front air dam directs air out and around the truck’s tires, benefitting the truck’s aerodynamic efficiency.

Bloch says new sealing has been added to prevent airflow between the cab and bed as well.

But what about third-party add-ons? GM says bug deflectors on the hood, wider tires and aftermarket bumpers can all increase drag and, in the end, add noise and increase fuel consumption.

But there are accessories you can add to your truck that will help. GM says Tonneau covers for the bed help smooth airflow over the truck, and Bloch says soft covers are more beneficial than the hard ones because they “form to how the air wants to flow.” Round, tube-style running boards can also help air flow smoothly down the truck’s sides, but flush-mount running boards are even better.