Volvo CE calls its new PL3005E the “most productive pipelayer” the heavy equipment maker has ever offered in its size class, citing lifting, power, torque and fuel efficiency increases in the new model.

Powered by a Tier 4 Final Volvo D8J engine, the PL3005E has a 55-ton tipping capacity. The machine’s design is excavator-based and with an optional kit can actually be converted between pipelayer and excavator configurations. Volvo says the conversion can be done in as about 2.5 hours. The PL3005E features hydraulics engineered for both pipe laying and digging applications, ensuring no power is lost when you go between configurations.

Volvo pipelayer manager John Duff calls the PL3005E “a perfect fit for medium-sized pipe projects in the 12- to 24-inch diameter range.” Duff says the machine is “more versatile and productive than a traditional dozer-style pipelayer” due to the excavator-based design and 360-degree swing ability.

The attachment, designed for use on skid steers, compact track loaders, backhoes and excavators, is powered by a nitrogen-charged power cell encased in heavy duty housing for protection and durability.

It has an optional tilt function that provides up to 15 degrees of angle side-to-side for working in uneven conditions. Skid steers and compact track loaders can operate the tilt function with electronic controls. It also bolts on easily to excavator and backhoe couplers, the company says.

VIDEO: The Dumphoe was half excavator, half site dumper in one weird little machine

While cruising through a heavy equipment forum recently I stumbled upon a photo of a machine that can only be classified as…”interesting.”

The machine had the front end of a mini excavator but the rear end of a site dumper. The whole thing sat on four rubber tires. The forum user mentioned that they thought the machine was made by an Irish company called Keltec and that it had never gone to market.

A quick Google search and sure enough, with a couple of clicks I found myself on Keltec Engineering’s webpage dedicated to the “Dumphoe.” You can check it out in action (with some sweet, sweet accompaniment by Coldplay) in the video below.

Michelin Earthmover’s new lineup of XTRA Load tires for rigid dump trucks are designed to increase productivity on the jobsite by handling heavier loads and traveling at faster speeds.

The tires are the first in the 24.00R35 size to earn a three-star rating for load capacity by the Tire and Rim Association, the company says. Most tires of that size are rated two stars.

The XTRA Load Grip tire is designed for soft ground conditions, as well as for inclines. Its reinforced casing allows it to increase a machine’s capacity by 9 tons, the company says. It can be driven up to 21 mph and has more wear resistance than previous models.

“The thing I love most is building homes, and this is a wonderful opportunity to teach kids all I know,” Moores says in a press release. “Many of these kids come into the class not even knowing how to use a hammer, but through hands-on learning, they come away with skills they can use for the rest of their lives, and quite possibly, use to find very lucrative and rewarding careers.” 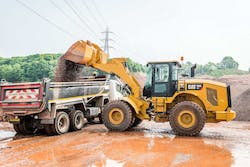 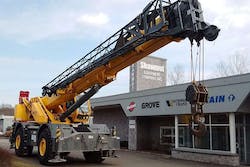 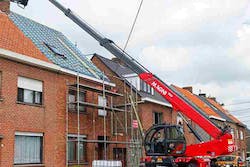 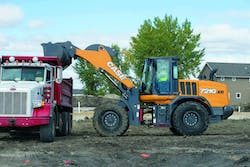