Lawmakers proclaimed that the latest and 36th-straight short-term highway patch would be the last as the bicameral conference committee met for the first time Wednesday.

The bipartisan committee of members of the House of Representatives and the Senate met publicly Wednesday morning to begin the process of drafting the first long-term transportation bill in a decade. House Transportation and Infrastructure Committee Chairman Bill Shuster (R-Pennsylvania) was named the chairman of the conference committee and vowed that the uncertainty surrounding highway funding and endless short-term extensions would soon be over.

“This is the last extension. Let me put an exclamation point on that,” Shuster said during the meeting.

“Congress is on the cusp of once again fulfilling its constitutional duty to fund our roads and bridges. Americans demand it, and our economy depends on it,” Inhofe said. “… By reauthorizing a long-term highway bill, we will be ending a wasteful cycle of short-term extensions and resetting the standard of long-term reauthorizations as were intended by President Eisenhower with his vision of a national interstate system.”

The conference committee will consider transportation bills from both the House and Senate to come up with a new unified legislation, with hopes of announcing the funding levels of the bill by Friday and file a conference agreement by Nov. 30. House Democratic Leader Rep. Nancy Pelosi (D-California) appointed Rep. Loretta Sanchez (D-California) help negotiate the final bill between the House and the Senate.

The House passed the six-year, $325 billion Surface Transportation Reauthorization and Reform Act in November. And the Senate passed its long-term transportation bill called the DRIVE Act in June, but the House didn’t act on it because of certain concerns regarding funding—the bill had funding for three years, but made commitments for six.

Shuster said the schedule to get the bill passed by the Dec. 4 deadline was “very ambitions” of the committee, but he seemed confident lawmakers from the two chambers could come to an agreement.

“We have our differences with the Senate’s bill, but that’s why we’re here. Fortunately, there is plenty of common ground between the two proposals to allow us to reach an agreement that both Houses can willingly support,” Shuster said. “We’ve already made some very good progress in working through some of our differences, and I look forward to finishing our work on a final measure that helps improve America’s infrastructure.”

Alabama DOT worker killed after being struck by a semi-truck 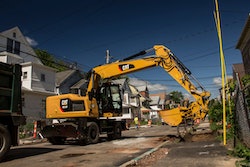 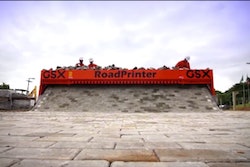 The RoadPrinter builds brick roads as if it were unrolling carpet