From the havoc severe winter weather has wreaked this year to sustainability in action and lessons learned from other agencies, here’s a look at the latest in snow and ice control and a sneak peek at the upcoming APWA Snow Show.

With the extreme cold temperatures this past winter, a number of times dropping several degrees below zero, this year’s spring pavement repair and pothole patching plans will be on a greater scale than in recent years past. 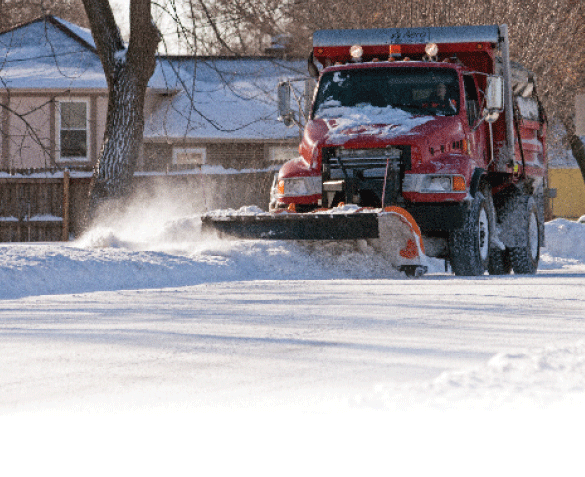 Brian Anderson of the Ontario Good Roads Association and member of the American Public Works Association (APWA) Winter Maintenance Committee, says with the extreme cold temperatures, he expects to see more pavement break up in the spring because an extended timeframe will be needed for the frost to come out.

Butch Riddell, general superintendent for Kansas City, Missouri-based Superior Asphalt, agrees, noting “the winter weather conditions with their extreme warm-cold cycles will lead to accelerated changes to roads across the country. We’re already seeing damage in our local infrastructure, which will only increase with the current conditions.”

The cold weather also not only had an effect on pavements but also caused “quite a few” water main breaks in the City of Dubuque, Iowa’s distribution system, points out John Klostsermann, street and sewer maintenance supervisor for the city.

Salt brine is often applied to roadways as a pre-treatment for approaching winter weather events. This thin layer of salt brine effectively inhibits the otherwise natural bonding of snow and ice to a road’s surface. However, salt brine production can have its limitations, including cost of installing a dedicated facility: transportation of brine to satellite locations; being labor intensive to produce, changing temperatures can affect brine accuracy, attaining adequate production rates and the ability to blend in additives.

Some Southern and Southwestern states that experience snowfall and major ice storms this winter were “held hostage” from the inclement weather. In Atlanta, Georgia, motorists were stuck on the road for hours and children were stuck on buses and at school, without parents being able to reach them after 3 inches of snow, much of it turning to ice, totally shut down the this city with very little snow-removal equipment.

Professional-grade salt brine making, blending and truck loading systems are being used as a mobile solution for municipalities and state agencies to help prevent such a crippling situation.

Brian Evans, marketing manager for Henderson, which manufactures a salt brine, says if predictions are correct, challenging winters may become the norm instead of the exception to the rule. However, the impact of the winter events “can be greatly minimized” with technology.

“The first step is producing eutectic brine (23.3-percent salt concentration by weight)…,” Evan explains. “Next is getting the brine into truck equipment capable of applying liquid anti-ice treatments to major arteries. This should be executed prior to the winter event. Last but not least is the need to follow up during or immediately after the storm with a long-lasting application of salt slurry.”

Salt slurry is an active mixture of eutectic brine and rock salt generated inside the truck body prior to its application on a road’s surface. Instead of taking days, safe travel conditions are typically restored within 24 hours. Henderson Products is initiating an educational program with its southern distributors geared around these concepts and the equipment necessary to accomplish this.

The City of Dubuque, Iowa’s Klostermann knows about equipment and techniques needed to keep roads safe for the motoring public. In the session, “Snow and Ice Control: Equipment and Techniques,” he will be presenting at the American Public Works Association Snow Show slated for May 4-7 in Cincinnati (apwa.net/snow) about the City of Dubuque’s basic snow and ice control operations including anti-icing, deicing and snow-removal operations, as well as share experiences and lessons learned as he incorporated new equipment and techniques into the agencies winter maintenance.

Klostermann will also address the use of blended liquid deicers for anti-icing and pre-wetting, the use of multi-edge snow plows and hi-gate wheel loader plows, along with implementing the use of an Automatic Vehicle Location (AVL) system for snow and ice control management and public information.

A wide-ranging group of stakeholders in Ohio collaborated, and in less than a year, they created a set of salt-storage guidelines – “Recommendations for Salt Storage Guidance for Protecting Ohio’s Water Resources” – for the state that met the needs and concerns of all the stakeholders. The stakeholders included highway agencies, counties, cities, townships, distributors and snow-removal companies. Recently, several salt storage piles in Ohio have been identified as the source of high chlorides in public or private ground water supplies. In fact, a village in southwestern Ohio lost its wellfield due to salt contamination, according to the according to the “Recommendations” report.

Elements of salt storage that are relevant to preventing contamination generally include siting, design and operation. When siting a salt-storage facility, accessibility to and from transportation routes such as major roadways, rail lines and/or waterways is a major consideration, along with finding a location that is central to the roads that will be treated, according to the report.

Bonus web-only reports at BetterRoads.com:“Essential Communication for Winter Emergency Preparedness” tips from Sara Croke, president of Shawnee, Kansas-based Weather or Not Inc. and “Behind the Storm – The Crucial Role of Public Works in Winter Stormfighting Fact Sheet” from the American Public Works Association.