Bobcat to Showcase New Concepts and Technology at Bauma

Ryan Whisner
Sep 1, 2022
According to Bobcat, the new S86 and T86 loaders are the most powerful the company has ever built.
Bobcat

Bobcat will showcase some of its latest machine and technology concepts in development for contractors at the world’s largest construction equipment trade show in October.

For Bauma 2022 in Munich, Germany, the company will have a comprehensive display of its wheeled and tracked loaders, compact excavators, telehandlers and more. This will include new excavators of 5 to 8 metric tons and new attachments.

However, machine debuts and its latest efforts in electrification and digitization of construction will be the focus.

With the T7X, Bobcat has delivered a connected, all-electric machine designed for power and performance. The CTL has been recognized for its ingenuity with two CES Innovation Awards in the Vehicle Intelligence and Transportation and Smart Cities categories.

At Bauma, Bobcat will be using the T7X to continue to gather feedback from customers who work in different applications, so the company can understand market opportunities in Europe, the Middle East and Africa. In addition, the company will be looking to study the regulatory needs in Europe and after-sales infrastructure readiness.

In addition,  replacing the 700 and 800 M Series loaders and completing the current R-Series loader lineup, the company will unveil the S86 R-Series skid steer loader and T86 R-Series CTL.

According to Bobcat, the two machines will be the company's most powerful compact loaders.

Each have three different auxiliary flow outputs. There is a standard-flow configuration providing 23 gallons per minute for applications such as load and carry, or where low hydraulic flow attachments are used. Two additional hydraulic performance functions are available using the new Electronic Displacement Control (EDC) pump. The high-flow function provides 36 gpm and a new super-flow function takes auxiliary flow to 42 gpm.

According to Bobcat, the super-flow function increases productivity with like-for-like attachments by 15 to 20%. It has a new five-coupler connection block allowing the use of larger, ¾-inch quick-coupler connectors and ¾-inch attachment hoses, helping to increase auxiliary hydraulic efficiency and performance.

“Many of the Bobcat products being presented at Bauma will be showcased for the first time,” said Gustavo Otero, president of Doosan Bobcat EMEA. “Over the last three years, we have significantly reworked our portfolio, added new product ranges, and at Bauma, we will premiere even more new product categories.”

Chosen as one of the finalists in the Mechanical Engineering category of the Bauma 2022 Innovation Awards, Bobcat quad tracks add versatility to skid-steer loaders, allowing them to easily adapt to different environments.

Being tested in the U.S., the quad track concept allows the wheels of a selected Bobcat skid steer to be easily replaced with four individual track pods. An oscillation bar is added to limit total oscillation, and the track pods are attached to the existing axles. When desired, the machine can be converted back to a wheeled loader.

Quad tracks themselves are a known technology but have not been used before on skid steers, which require a track system that can withstand side-to-side movements as well as forward and backward.

Bobcat says the ground pressure exerted by the quad track loader falls between that of the comparable skid steer and CTL. The quad track helps provide better force when excavating soil, pushing snow or in other applications where a high push force is required compared to the skid-steer loader.

Another conceptual design is the E35e electric-powered compact excavator. With the hydraulically controlled joysticks replaced by an electro-hydraulic system, Bobcat can customize controls to all levels of operator skill.

The company says additional levels of digital functions and features are also available to the operator.

Through the use of integratead sensors, the E35e can carry out some semi-automated tasks for precise grading and leveling, trenching or repetitive tasks such as return to dig.

“We want to show the capability of such a concept and prove the value it brings to the operator‘s job and their productivity,“ said Vijay Nerva, head of innovation and acceleration, Doosan Bobcat EMEA.

In addition to its electric power, the E35e also featured a new transparent Organic Light Emitting Diode (OLED) touch display that was developed in conjunction with LG Electronics and BSI Research.

The prototype provides a transparent, engaging touch display embedded within the glass structure of the operator’s cab. This allows operators to view the construction site around them while using the front windshield or side window as a large touchscreen.

Bobcat says the display can be customized with smart widgets and interactive applications to integrate data relevant to the jobsite or daily activities. Using the touchscreen, it is even possible to remotely control the excavator itself, or other excavators present on the jobsite, via the touchscreen or other mobile devices.

The display can be positioned on the front windshield or side window of the cab on a range of Bobcat machines, including compact excavators, telehandlers and loaders. 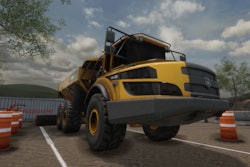 CM Labs to Show New Simulators for CTLs, Telehandlers and ADTs at Bauma 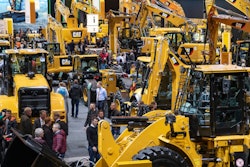 German Cat Dealer to Display 70 Pieces of Equipment at Bauma 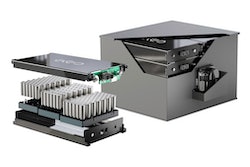