Though more prevalent in Europe, tiltrotators have been gaining in popularity in the U.S.

The attachments rotate 360 degrees and tilt side to side anywhere from 40 to 50 degrees, depending on the manufacturer.

Benefits of tiltrotators include less need to move the excavator to dig or perform other tasks because of the flexible movement of the attachment. They also speed up production. Some manufacturers estimate a 1,500-hour return on investment because of the increased efficiency. The additional attachment movement enables more precision, as well.

All of the tiltrotators offer hydraulic coupler options and quick attach systems that enable the operator to stay in the cab to change tools. They can also be attached manually, directly to the excavator.

Tiltrotators can operate such tools as buckets, grapples, compactors, forks, rippers, sweepers – just about any attachment a contractor would want to use.

Here’s a look at what’s currently on the market:

Engcon offers a full range of tiltrotators, for excavators ranging from 1.5 to 33 metric tons through its eight-model EC lineup. The company says an owner gets a return on investment after 1,500 hours. The Engcon tiltrotators have an integrated hydraulic quick coupler as standard. An automatic EC-Oil connection is optional. The tiltrotators can attach director to the excavator’s dipper stick or to a quick coupler. Engcon plans to roll out its third generation of tiltrotators this fall. The new lineup covers models from 9 to 19 metric tons. The line features new technology from Engcon that uses software and a new valve to collaborate with the excavator’s load-sensing hydraulic system for smoother digging and increased precision.

Steelwrist offers a range of tiltrotators for excavators and backhoes between 1.6 and 33 metric tons. The company says its attachments are compact with low height and weight for improved digging geometry and fuel efficiency. Its X series consists of 10 models. All major components are cast in steel. Other features include vertical tilt cylinders that allow digging in narrow trenches, grease lubrication that can be connected to a central lubrication system and six-channel swivel with high flow. Double acting tilt cylinders with check valve are an option. The company recently released its smallest tiltrotator, the XO2 for excavators ranging from 1.6 to 2.7 metric tons. The X02 is compatible with a range of S30 work tools for grading, digging, trenching, asphalt cutting, ripping. The tiltrotators come with mechanical or hydraulic locking. Steelwrist also has a new line of SQ quick couplers for a fully automatic oil connection between the tiltrotator and the excavator.

The company has eight models for excavators ranging from 1.5 to 43 metric tons. The smallest in the lineup is the R1, which combines smart technology with strength similar to tiltrotators for larger weight classes, the company says. Its largest and most recent model is the RC9 for excavators weighing 32 to 43 metric tons. The company offers a variety of options for its tiltrotators, including the ICS control system, which allows operators to control tilt, rotation and other functions during the same excavation movement through ergonomic handles and a display screen. It offers the SecureLock safety lock between the coupler and tiltrotator to reduce the risk of swinging or dropping attachments. It also offers QuickChange for connecting and disconnecting attachments without leaving the cab, the Innovative Lubrication System to distribute grease and an oil-filled rotor housing.

Kinshofer’s Nox Tiltrotator lineup consists of six models for excavators ranging from 6 to 25 metric tons. Along with 360-degree rotation, they have a tilt angle of 50 degrees. The tiltrotators can be mounted directly on the excavator arm (direct mount) or as sandwich-design by attaching it to the excavator arm with a quick coupler. You can choose between mechanical, hydraulic or fully hydraulic quick change systems. The compact design with the fully integrated tilt and rotation unit protects against damage. There are no protruding cylinders or piston rods that can be damaged, and low construction ensures a higher breakout force. An optional integrated gripper provides an additional attachment for handling poles, tubes and curb stones. The gripper is integrated at the lower quick coupler and does not affect the height or the attachment cross-movement. The tiltrotators come GPS-ready and use the NoxProp+ or NoxProp Control System for using the most common 3D machine control systems.

Cat offers tiltrotators for its excavators ranging from 6 to 35 tons. The company’s models are offered under it TRS, or TiltRotate System, series. Cat partners with Rototilt for its tiltrotators but also added its own designs to speed up installation time to as little as four hours. TRS models have two interfaces: a top interface that connects the TRS to the carrier machine and a bottom interface that connects various work tools to the TRS. The TRS models come in different coupler configurations, such as an S-type coupler for both the top and bottom interfaces or a pin-on top interface and pin-grabber coupler bottom interface. Other features include a reinforced gearbox with a bearing ring that distributes working forces to reduce stress on the TRS and the host machine. A double-acting tilt cylinder has integrated load-hold valves that sustain holding pressures and prevent cylinder movement under load. The cylinder also features hardened pistons and maintenance-free bearings, and its surfaces are scratch-resistant and rust-proof.

AMI Attachments recently released the AXXIS TR Tiltrotator – powered by Nox. Offering a tilt range of 50 degrees in either direction and a compact design, the AXXIS TR is available for excavators ranging from 3 to 27.5 tons. It is also compatible with backhoes in 30, 50 and 70 classes. It features a fully enclosed helical actuator instead of cylinders for increased and constant holding torque and allows digging of narrower trenches. The AXXIS TR is GPS compatible and available with various ergonomic SVAB joystick configurations. It also comes in three coupler configurations: pin grab coupler, S-lock coupler and wedge coupler. Other features include an oversized worm gear, cast-iron housing and proportional valves.

The OQTR four-model lineup of tiltrotators from OilQuick is for excavators ranging from 9 to 33 metric tons. The system is based on Engcon’s rotor body and OilQuick’s couplers. Using the OilQuick tiltrotator equipped with the sandwich solution, the driver can tilt, rotate or change the tiltrotator for a bucket or other attachment and also change hydraulic tools under the tiltrotator without having to leave the cab. OilQuick also supplies a range of tools and accessories for tiltrotators. When excavating with the tiltrotator, the company says, the machine lifts about an extra 55 tons every hour (based on using the tiltrotator on a 15-ton excavator) and can help you save fuel costs and reduce maintenance and repair costs. Options include Tilt-Lock Extra or ICS control systems, high-flow swivel for running high-flow attachments, a grapple module for efficient picking and handling, and MIG2 joysticks for improved ergonomics and functionality. 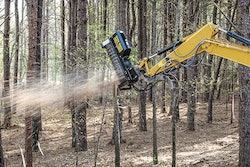 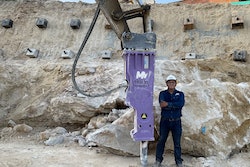 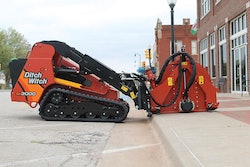