Genie has upgraded its lineup with its new GTH-1256 high-capacity telehandler that can lift 12,000 pounds.

The GTH-1256 delivers more capacity at maximum lift height than any other telehandler in its class, the company says. That’s 6,000 pounds at a max height of 56 feet 3 inches and 3,500 pounds at max outreach of 42 feet.

It runs on a side-mounted 120-horsepower Deutz engine with a four-speed powershift transmission. According to Genie, the GTH-1256 delivers 15% more efficiency in power transfer for picking and placing activities. It also features limited slip differentials on both axles, full-time four-wheel drive, and single-reduction, planetary, specialty and transaxle lines for power and performance on any terrain.

The new GTH-1256 shares many features and parts across the other GTH product line. The cab offers improved visibility of all four tires, a 7-inch display, reverse backup camera, rear proximity alarm and A/C system.

The GTH-1256 shares attachments with Genie’s 10,000-pound-capacity telehandler, the GTH-1056, including three carriage sizes – 48, 60 and 72 inches – a rotating carriage and swing carriage. Genie’s Quick Attach system makes swapping attachments fast and simple. This ease-of-use and commonality of attachments gives fleet owners an opportunity to increase the versatility of their fleet in a cost-effective manner, contributing to lower costs and a better ROI, Genie says.

“This is a high-capacity telehandler designed, built and extensively tested for the realities of heavy-duty jobs,” says Genie Senior Product Manager Amalija Kopac. “When we were designing and testing this machine, we prioritized durability and reliability, along with a reduced total cost of ownership and productivity, ensuring our 12k telehandler will deliver the performance and longevity needed by equipment operators and owners — now and well into the future.”

The company hinted that more new models may be on the horizon, saying, “This is the next step as Genie develops and expands our telehandler family.” 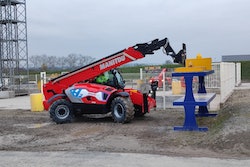 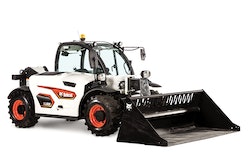