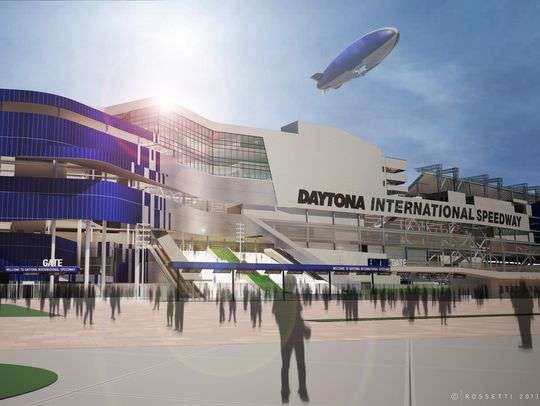 A rendering of the $400 million grandstand renovations underway at Daytona International Speedway.

A construction worker operating a scissor lift as part of the renovations taking place at the Daytona International Speedway suffered a head injury Saturday that could have been much worse.

The unidentified 43-year-old worker was operating the lift about 94 feet in the air when his head was pressed between a steel beam and the lift, according to a report from The Daytona Beach News-Journal.

The man was rescued by fellow workers before firefighters arrived and immobilized him. He was then taken to the hospital where he is in serious but stable condition. Design-build firm Barton Marlow is overseeing the project and said the man is “doing well and on his way to recovery.

More than 300 workers are in the process of renovating the speedway’s grandstands. The $400 million project involves the erection of new steel components and is expected to be complete before the 2016 Dayton 500.

This is the second such injury involving a worker’s head being pinned in the last two weeks. On April 9, a construction worker in Austin, Texas was hospitalized with life-threatening injuries after his head was pinned by work elevator.