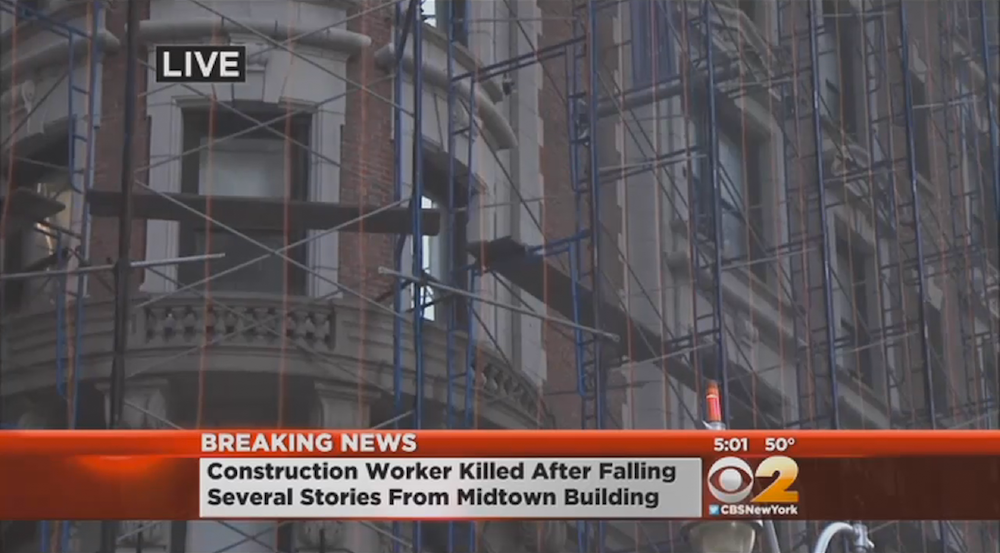 While working from scaffolding outside a New York City hotel last week, a construction worker died after falling about 80 feet.

The worker, whom police have not yet identified, was working alone on the scaffolding outside of the Dream Hotel near Broadway, according to a report from CBS New York citing eye witness accounts.

The worker was about eight stories up, witnesses said, and fell to a landing over the hotel’s main entrance.

Two witnesses told CBS that even before the fall they were worried about the safety of the worker because he was by himself on the scaffolding.

“We do see the workers often out there without harnesses on, so it’s always kind of scary when we’re watching out the window,” witness Jennifer Harvey said. Investigators have not said whether the worker who died was without a harness or not.

The hotel has been undergoing a renovation for about a year. All work has been stopped until further notice while the incident is investigated.

Unfortunately, this incident involves a combination of two deadly situations on construction jobsites.

Plus, a number of the accidents Equipment World has covered in our Safety Watch articles involve someone left alone, at least on a temporary basis.

And while you should always try to have a spotter watch your back when at work, even if there are other workers on the site, a laborer or operator may at times essentially be working on their own. You can check our tips for staying safe while working alone on the jobsite by clicking here.