It’s a brand so synonymous with the equipment type that its name remains foremost in the minds and on the tongues of contractors, even now many years after other leading equipment manufacturers jumped into the skid-steer market. Bobcat may today be only one of more than a dozen brands of … ummm … “bobcats” but being the Kleenex of the compact loader industry means when a new Bobcat rolls out, heads turn. 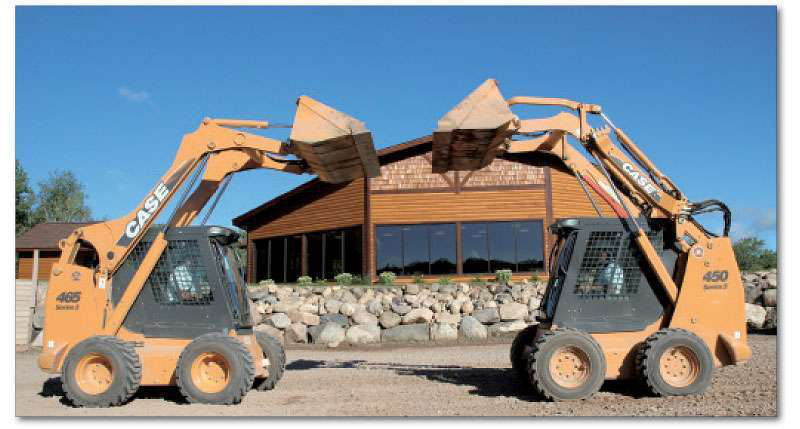 Case is among the equipment manufacturers offering vertical- and radial-lift models in the larger skid-steer market. Both models have 83 net horsepower: the vertical-lift 465 Series at left has a rated operating load of 3,000 pounds and the radial-lift 450 Series 3 is rated at 2,450 pounds.

Such it was in 2009 when the company introduced the first M-Series skid steers featuring a new cab-forward design, including the 74.3-horsepower S650 with a standard rated operating load of 2,690 pounds, smack in the heart of the market for skid steers rated at 2,201 pounds and up. The next step came this past summer, when company rolled out the S850 as its largest skid steer in Bobcat’s current lineup, with a rated operating load of 3,785 pounds and a claimed industry-leading lift height of 12 feet. This, says Bobcat loader product specialist Mike Fitzgerald, gives the S850 extra oomph for loading trucks and powering such higher-flow hydraulic attachments as planers. 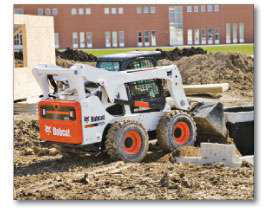 New Bobcat M-Series skid steers have a cab-forward style designed to provide the operator with both a clearer view to the working tool in front and increased visibility around the machine when working.

The performance and versatility of a large skid-steer loader allows the contractor to accomplish the same amount of work with a single piece of equipment as he would have with multiple larger pieces,” Fitzgerald says.

No longer built for just rudimentary or part-time operation, skid steers are now decked out in comfort features once only found on larger machine types. With the M-Series, Bobcat increased the size of the cab by 10 percent and redesigned the interior to allow operators to adjust the environment to individual preferences. The up-and-down travel of the optional suspension seat was increased by more than 30 percent for a smoother ride over rough terrain, says Fitzgerald, adding that the seat was given two additional inches of forward/reverse movement to accommodate operators of various heights. Cab pressurization is improved via a new one-piece seal that goes all the way around the door and fits into a special curved pocket. Noise is another factor affecting operator comfort, he says, and the sound level of M-Series loaders has been lowered by more than 60 percent, in large part to new engine mounts designed to isolate vibration.

As rated operating loads increase, the radial-lift design of skid steers tends to give way to a vertical-lift design. The majority of models rated over 2,200 pounds across the board feature the latter, truck-loading-friendly design, including all five current Bobcat models.

However, radial-lift models from Gehl, Case, Caterpillar and Volvo do appear in the large-machine category.

Rated at 2,450 pounds, the Case 450 Series 3 uses the company’s Power Cycle linkage, “suited for somebody who is continually grading and needing fast cycle times – dump, load and lift – versus a vertical-lift path, which is suited more for truck loading,” says Jeff Jablonski, product promotion specialist at Case’s Tomahawk Customer Center. “This is going to be quick for an excavating contractor doing below-grade digging, bucket curl, back out and dump, where he needs those cycle times. We see a lot of excavators using radial-lifts because it gives them that cycle time and breakout force to go down into the grade and move dirt.”

Compared to Case’s smaller radial-lift machines, the 450 Series 3 model’s bucket cylinder is uniquely moved up and supported by added linkage. Powered by the same 83-horsepower engine as the 450 Series 3, the vertical-lift 465 Series 3 has a rated operating load of 3,000 pounds (in the Case nomenclature, models ending in 0 have a radial-lift design and those ending in 5 are vertical lift). The heavier rated operating capacity particularly suits landscaping contractors for the loading and carrying of pallets of sod or block, “and with that maximum reach of the vertical-lift machines, makes truck loading of those materials easier also,” says Jablonski.

Other recent addition to the larger skid-steer market include three vertical-lift John Deere D-Series models, topped off by the 332D with a rated operating load of 3,200 pounds. This year, as part of a beefed-up Series 3 introduction, Caterpillar rolled out an updated 252B vertical-lift model, rated at 2,650 pounds.

Following is a full rundown of the large skid steers offered by contributing manufacturers. 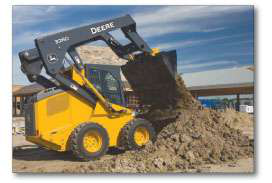 As part of the new D-Series of skid steers and compact track loaders, John Deere offers vertical-lift skid steers with rated operating loads of 2,600, 2,800 and 3,200 pounds at the upper end, correspondingly designated the 326D, 328D and 332D models respectively. Their electronically-controlled Tier 3/Tier 4 Interim engines have a new auto-idle feature that cuts down on noise and fuel use. Compared to their predecessors, D-Series cabs have 24-percent more room (including 6 more inches of headroom), are 50-percent quieter and have larger door openings for easier access. 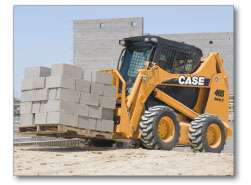 At the top end of the Case skid steer product line, two 83-horsepower models offer a choice of vertical- and radial-lift designs. With a rated operating load of 2,450 pounds, the radial-lift 450 Series 3 model is suited for pushing or digging applications, such as finish grading and material distribution. 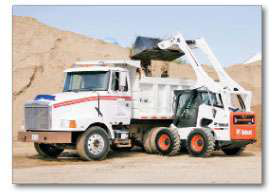 As Bobcat continues a product line transition to the M-Series, it today offers five vertical-lift skid steer models with rated operating loads beyond 2,200 pounds. The newest addition, the S850 introduced this year, is now the largest skid steer offered by the company, boasting a rated lift capacity of 3,875 pounds, or 17 percent more than the previous largest model, the S330 rated at 3,300 pounds. With the cab-forward design unveiled with the 2009 debut of the M-Series S650, the S850 has a lift height of 144 inches, claimed to be the largest among core players in the skid steer market. Coupled with the 10-percent increase in cab space is a 60-percent reduction in noise levels for the operator.

The 1110 Series II skid steer – also known as a Wheeled Robot in universal JCB terminology – continues the JCB tradition of a unique one-armed design that allows for left-side cab entry. The “monoboom” safety feature, says JCB, is complemented by a lifetime loader arm warranty that supports the company stance that lifting ability, rated at 2,535 pounds, is maintained over time. Once inside the machine, the operator has increased visibility, thanks to absence of a left-side obstruction from a traditional loader arm, as well as the updated machine’s low slung arm and sloped engine cover, says JCB. 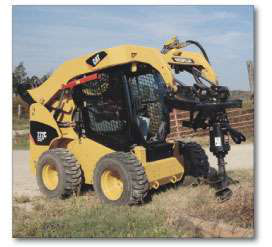 From two different series, each of four large Caterpillar skid steer models boasts recent updates. The radial-lift 256C and vertical-lift 262 and 272C models are now available with the laser-based AccuGrade grading system and a Hystat response control system that allows skilled operators to work a machine to its full potential while also accommodating operators of lesser experience. Software permits the hydrostatic drive/steer system to be adjusted to one of three response rates. The vertical-lift 252B model, as part of a beefed-up B-Series 3 intro this past summer, features a redesigned “dead engine lower valve” providing an easier means of lowering the lift arms should the machine run out of fuel.

With a rated operating load of 2,400 pounds, the MC110B tops Volvo’s B-Series of radial-lift skid steers, boasting increased ground speed and lift/lower/curl/dump cycles times claimed as 35-percent faster than previous models. Volvo says its skid steers are “purpose-built for ground-engaging work” with buckets and other attachments. Radial lift, the company says, provides the MC110B with stability when working with the arms raised during pallet fork applications. Operators have a choice between hand/foot mechanical controls and hand-operated hydraulic pilot controls. 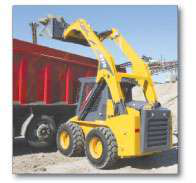 Gehl offers both vertical- and radial-style lift models in the large skid steer segment. The newest model, the vertical-lift V270 offers a lift height of just over 130 inches and, when equipped with optional counterweight, its rated lifting capacity increases to 3,000 pounds. Features include the HydraGlide ride control system, the Hydroloc safety lockout system, an engine auto shutdown system and universal-style quick-attach. The radial-lift 6640E likewise calls on an 84-horsepower Yanmar engine to deliver its 2,400 pounds of rated operating load. Topping the established E-Series, the vertical-lift 7810E is one of only four skid steers on the market to exceed 10,000 pounds in operating weight. 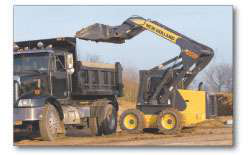 In addition to the truck-loading capabilities due to the increased forward reach of a vertical-lift configuration, the Super Boom design of New Holland skid steers provides stability during load-and-carry operations by placing the load between the tires. This reduces the chances of tipping and yet increases lift capacities, says the company, adding a long machine wheelbase ensures a low center of gravity. The Super Boom design provides the operator with unobstructed rear visibility, thanks to the absence of rear frame towers. EW