With an eye toward the rental market, Felling Trailers has launched its FT-12 EZ-T tilt trailer that allows operators to drive equipment on and off the trailer at ground level.

The company says the new trailer comes in handy for loading, unloading and transporting floor sweepers, scissor lifts, rollers and other equipment with low ground clearance.

The trailer is raised and lowered by a corded remote control. When lowered, the equipment being hauled can simply drive up onto the trailer. That’s because the trailer features rotating torsion suspension that provides a load angle of only 5 degrees. The operator then raises the trailer into hauling position by remote operation of the electric/hydraulic lift system.

Check out this video to see a demonstration:

The trailer’s lift system runs on a 12-volt battery that is contained in a lockable enclosure.

“The EZ Tilt is what I would call a universal trailer,” says Ed Steinemann, Felling’s national account manager. “The electric/hydraulic lift system with the power up and down gives the operator the ability to load and deliver two scissor lifts at a time. Plus, with the EZ Tilt’s low load angle, it gives the operator the ability to load the hard-to-load floor sweepers and has the capacity to haul a skid steer.”

The company says its versatility makes it ideal for the rental market because of the constant need to transport low-clearance equipment.

The trailer’s axle and suspension system, which consists of two 7,000-pound drop axles with rotating torsion suspension, was designed by Lippert Components through a partnership with Felling.

The trailer’s tilt deck is 18.5 feet long, including the 3.5-foot approach plate at the back of the deck. Unloaded deck height is 20.5 inches. 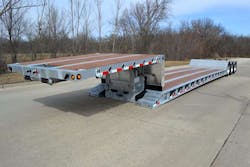 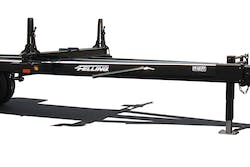 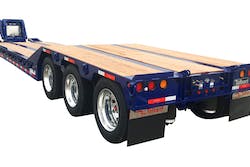 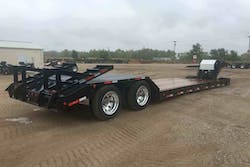