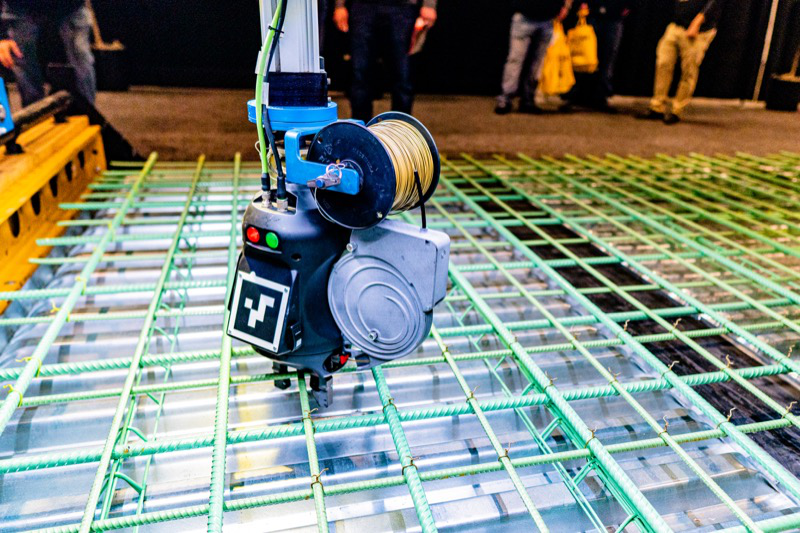 “This is not science fiction,” said Advanced Construction Robotics co-founder and president Jeremy Searock. He’s near the back of the Las Vegas Convention Center’s North Hall and standing in front of TyBot, speaking to show attendees gathered in curiosity around his machine. As the name suggests it’s an autonomous rebar tying robot.

“This is a real product that you can buy right now.”

Check out all the details and see the TyBot in action in this video, or read on below.

While autonomy is still in its infancy and has yet to prove to most people that it can be scaled in the real world, Searock compares the work being done there and in robotics to the dawn of a new industrial revolution. He says that construction work in particular is on the verge of a massive transformation thanks to robotics.

“The original Industrial Revolution gave us modern construction equipment through electricity, motors and combustion engines,” Searock says. “You did work the way you did it before, but you added electricity and engines in order to do the same business in a different way. That led to a huge disruption in the world for the better.

“I’m sure none of you guys want to go back to hand shoveling foundations,” he says to laughter and nodding heads.

Apart from getting the TyBot into position to start its work and telling it what direction you’d like it to work in (all done through a small remote control panel), the robot works completely autonomously.

In fact, the machine doesn’t even use BIM or plans of any sort to do its work. It can actually see the rebar using computer vision just like a human would see it.

ACR says the robot is capable of approximately 1,000 ties each hour, and can do the same amount of work that would normally require a crew of 6-8 workers. It has primarily been targeted at the bridge industry, but it’s now ready for any horizontal rebar work, Searock says.

So what’s it cost? Searock told us the machine is available for lease or for purchase. And while the leasing terms can be negotiated based on job size and other factors, Searock says a purchase will set you back $796,000. The good news is that most sites only need one.

Plus, because of the huge increases in productivity and the cost savings it provides, Searock says the typical return on investment companies are seeing is only around one year.

But ACR isn’t stopping at rebar tying. Searock tells us that the company plans to release another robot called IronBot that will carry and place rebar in 2021.

Searock says sites that use IronBot to install rebar and TyBot to tie, will see a 400-percent productivity increase, allowing you to do twice the amount of work in half the time.

Those are huge gains in an industry that Searock correctly notes has consistently ranked near the bottom among all major industries when it comes to productivity.