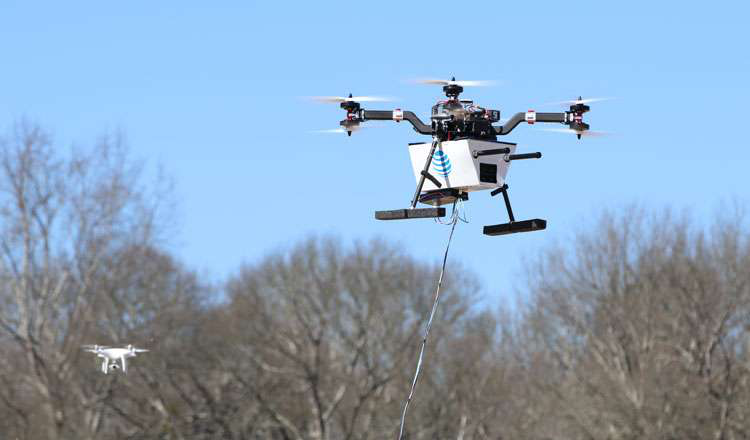 Though drones have already been given construction tasks such as inspections, jobsite safety monitoring, progress photos and surveying, a future industry use of unmanned aircraft could be delivering internet access to remote jobsites.

AT&T has begun testing drones as a quick way to deploy LTE wireless data in areas that are either experiencing a network outage or are remote or otherwise uncovered by its network.

According to a release from AT&T, the company conducted its first test flights of these LTE-equipped drones, dubbed “flying COWs” for Cell on Wings, last week outside of Atlanta. These test flights saw the drones successfully transmit and receive LTE signals. AT&T says it is the first wireless company to test LTE-carrying drones.

AT&T intends the drones as a way to quickly bring LTE connectivity in the event of network outage caused by a natural disaster, or to boost coverage of a crowded area such as during a concert or other large event. But it’s easy to see them one day serving contractors as a quick way to bring internet access to remote jobsites.

Typically in emergency or network support scenarios wireless carriers deploy COW/COLTs, or Cell on Wheels/Cell on Light Trucks, which mount a network transmitter to a telescoping tower that extends from the truck’s chassis. According to a ZDNet report, prior to the test flights, AT&T blanketed the test area with LTE signal from a COW/COLT and then switched the truck’s satellite off, leaving the site without connectivity, ZDNet reports. When the drones were launched however, coverage quickly returned.

AT&T says deploying flying COWs initially appear to be much faster to deploy than the traditional truck-based cells.

The test drones carry a small cell and antennas and AT&T notes that the whole rig, even in flight, is tethered to the ground by a thin cable. This tether, AT&T says, provides the drone with a “highly secure data connection via fiber and supplies power” to keep the drone in flight for an unlimited amount of time. The drone uses satellite to move calls, texts and data.

AT&T says that just one drone will be able to provide LTE coverage to an area up to 40 square miles, noting that the drones’ coverage area expands as they fly higher. “Even with our test up to just 100 feet, we flew it at various altitudes, and you could see the coverage area expanding,” AT&T drone program director Art Pregler told ZDNet. Per FAA regulations, AT&T will be allowed to fly the drones up to 400 feet. That is 500 percent higher than a traditional COW/COLTs.

The company plans on having these drones operational on a private network by the end of this year but says gaining regulatory approval for their use on public network will take longer, ZDNet reports.