Kiewit is known as one of the country’s top construction firms. What is less well known is that they’ve diversified into software development.

InEight is the company’s wholly owned subsidiary and offers HD Suite a group of software programs covering the gamut of back office and field solutions for all sizes of companies in the building, infrastructure, mining, oil and gas, and utility industries. (For more on this, see subhead “By contractors for contractors” on page 82).

So why would a $9-billion, global construction company diversify from dirt and diesel into digits?

“We did an internal study and looked at the top 500 construction companies from 1965 and compared that list to the top 500 companies in 2015,” says Chris Dill, vice president of Kiewit Technology Group.

“What we found was startling – 450 of 500 who were on the list in 1965 were gone in 2015,” Dill says. “Not off the list…gone.” Dill made his remarks as the closing keynote speaker at this year’s Trimble Dimensions conference, and in a follow up interview with Equipment World.

Kiewit dug into the details and found three primary causes for the demise of 90 percent of the country’s top construction companies.

• Change. They failed to recognize what was going on around them quickly enough to address it and mitigate the challenge.

• Innovation. They failed to adopt and use technology.

• Risk. They took on projects that went drastically over budget.

But Kiewit is also keeping its eye on the challenges of the future, Dill says, including:

• A global population of 10 billion by 2050. The construction market needed to serve this population will grow to $15 trillion a year – a great opportunity, but only for those companies with the systems, efficiency and technology to support exponential growth.

• Construction’s lack of productivity growth. “Construction is disjointed and geographically dispersed,” Dill says. “Communication and connectivity across the construction supply chain is a real challenge – and it’s only becoming more complex for our industry.”

• Public-Private-Partnerships (P3s) and the changing relationship with project owners. In the past, construction companies built the project, cashed the check and moved on. Financing, engineering, operations and maintenance were done by somebody else. Today, those lines are increasingly blurred, especially with P3s, where the contractor may finance or partially finance the project, design and engineer the structure, and then perform the maintenance and upkeep for up to five decades.

Well before the creation of its software subsidiary InEight, Kiewit was an industry leader in the adoption of technology. In the past few years the company moved aggressively to eliminate as much paper as possible from their processes.

“In 2010, we did over two-million visual equipment inspections on paper and processed one-million time cards,” Dill says. “We had trailers full of people processing that paper.” Kiewit realized its business could not evolve with the market as long as it relied on inefficient paper systems.

In 2011, the company launched a massive initiative to modernize its processes and eliminate paper. “Now what you see on our jobsites is a lot of supervisors and foremen walking around with iPads in their hands,” says Dill. Communication between the office and the field becomes instantaneous and actionable at any level, helping everybody make good decisions without delays.

A single source of truth

Kiewit had also been an early adopter of third-party process management and back office software. “We had great solutions that did an excellent job,” says Dill. “The problem was they were largely single point solutions. They were used within a discipline, and those disciplines got value from them; but that information was not used in any larger context where we could paint a broader, more complete picture of what’s going on across a complete job or the entire portfolio.”

Looking for a more holistic approach to information, Kiewit began building its own software solutions to create what Dill calls “a single source of truth” that would link the all the office functions to all the field functions. And with multiple subcontractors to coordinate, the company also shared the software with its partners. Out of this endeavor, the InEight subsidiary was born.

Originally created for internal use, the software developed into a suite of products to cover the full scope of Kiewit’s operations. And rather than keep it to themselves, Kiewit created InEight to sell this same software to the construction market at large, billing it as construction software built by a construction company.

“Everything InEight produces is field tested by Kiewit,” says Dill. “It is cloud based and completely separate from Kiewit in every way.”

The InEight project portfolio gives you the systems you need to run a capital intensive project from inception to decommission, says Dill.  Everything from forecasting, estimating and budgeting to vendor and subcontractor coordination, equipment management, project management and turnover on the back end. It works with mobile devices for daily work planning and time capture. And it can be configured to integrate with your existing ERP and back office programs. The newest component of the InEight project portfolio is a model data manager that enables you to integrate 3D BIM models with project schedules, procurement, cost and other data.

The expandable portfolio is geared to support the sophisticated needs of large companies, but the role-based subscription pricing is aimed at the local contractor, Dill says. “On the small-to-medium end of the market we see consumption of individual solutions. On the large end we see more consumption of the entire portfolio,” he says. Pricing depends on the number modules you choose and the number of users you license. For more information on the software go to www.ineight.com.

The future is visual

Not content to rest on its laurels, Kiewit is pushing into the realm of “information visualization.”

In particular, Dill mentions Trimble’s joint venture with Microsoft HoloLens, where Trimble SketchUp drawing models can be viewed at any scale, any angle or perspective using the HoloLens virtual reality goggles. You can design a model of a building in SketchUp and then put on the HoloLens goggles and fly over the structure for a bird’s-eye view or virtually walk inside the design to see how the building looks from the interior.

The SketchUp/HoloLens technology is not only a useful design technology, it’s a great presentation tool to show clients how their building or project will look when it’s finished. “If you thought the HoloLens presentation (at the Trimble Dimensions conference) was science fiction, or years down the road, I’m telling you, it’s here right now – and here to stay.” Dill says. “As an an early adopter of this type of technology, Kiewit is working hard to stay ahead of the curve and help not just one company stay ahead of the curve, but the entire industry,” Dill says. 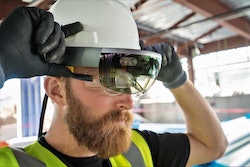 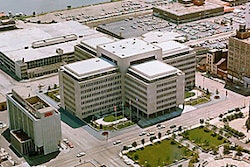