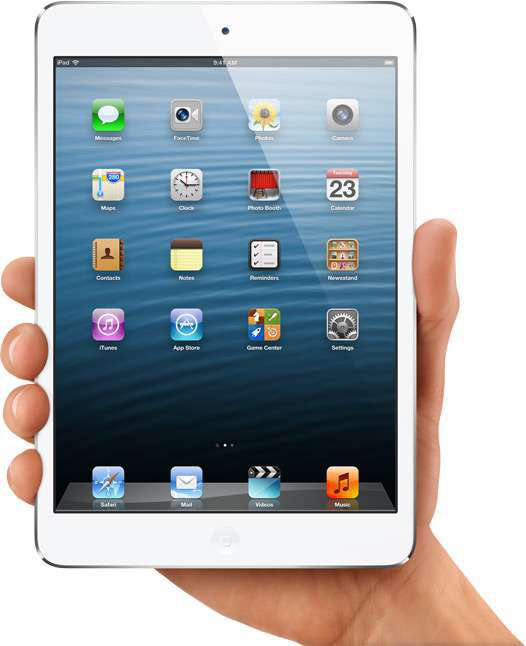 During a special event in San Jose today, Apple announced a smaller, cheaper version of the iPad alongside a much faster one.

With a screen size of 7.85 inches, the iPad Mini is only 7.2 millimeters thick. Apple says that makes it is 23 percent thinner and 53 percent lighter than its big brother the iPad. It’s also thinner and lighter than Google’s Nexus 7 tablet.

It’s also much cheaper than the iPad with the 16 gigabyte model priced at $329. But with that cheaper price, comes a couple tradeoffs. The iPad Mini is now the only iDevice Apple offers without a Retina Display. Instead, the 7.85-inch screen’s resolution is 1024 x 768. That’s still a great display and is definitely on par with similar tablet offerings from Google and Amazon, but the screen density clocks in at 162 pixels per inch — the same as the iPad 2, or 82 ppi less than the iPad.

The iPad Mini is also not quite as powerful as its bigger brother. Apple announced an updated 4th generation of the iPad today, powered by a new A6X processor. Apple says the new processor makes the 4th gen iPad twice as fast as the 3rd generation model that announced just this past Spring.

Meanwhile, the iPad Mini is powered by the A5 processor, the same processor inside the iPad 2. For reference, the 3rd generation iPad was billed as twice as fast as the iPad 2. So in terms of processing power, the iPad Mini is a couple of generations behind the curve. Such is to be expected though with such a heavily discounted price point. The iPad Mini also packs two cameras, one front-facing for video chat and another around back that shoots 5-megapixel images. There will also be LTE models from Verizon, AT&T and Sprint.

Another note on the 4th gen iPad: Apple replaced the 30-pin dock connector that charges the device and connects it to various accessories with the new Lightning port that it introduced with the iPhone 5. So if you’ve got accessories or cases for your current iPads, they likely won’t work with this new model.

The prospect of a faster iPad should appeal to anyone who hasn’t pulled the trigger on the device and I’m sure the smaller, more mobile size and the vastly cheaper price point of the iPad Mini will appeal to many contractors looking to deploy a fleet of the devices for use on the jobsite. I do wonder how much the 5 inch screen size will impact the utility of a tablet though. At what point is a screen to small to properly view documents and plans while at work?

Apple is opening up pre-orders on both the iPad Mini and 4th generation iPad on Friday, October 26. The new devices will begin shipping November 2nd. As stated before, the iPad Mini pricing will start at $329 for the 16 gigabyte Wi-Fi only model and increases by $100 for each step up in storage: $429 for the 32GB and $529 for the 64GB. LTE models will start at $459. The 4th-gen iPad will start at $499 with the LTE model beginning at $529.