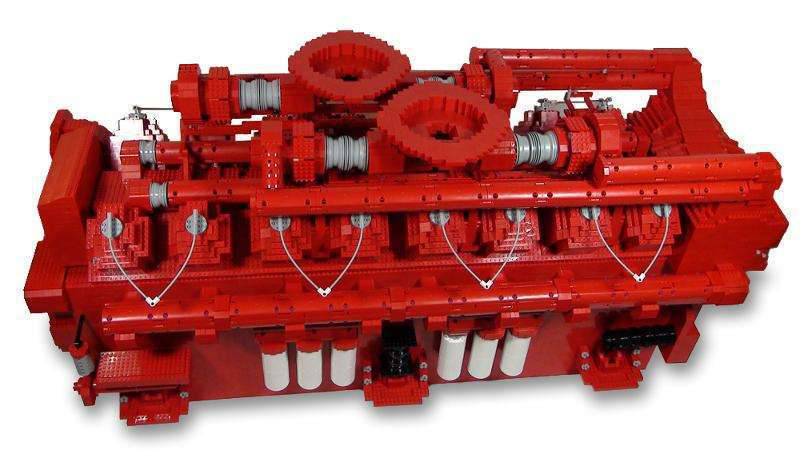 Olympic arenas, Batman and Robin, countless pieces of construction equipment and even Mount Rushmore have all been meticulously sculpted with the classic building blocks of our youth, Legos. Saturday, the latest Cummins engine joins the fray.

Cummins announced Thursday its Brickworld Build Team, made up of middle school science, technology, engineering and math (STEM) students and teachers from three Chicagoland area schools and Cummins engineers. The team will meet Saturday June 16 during the Brickworld Lego convention at the Westin Chicago North Shore hotel with one goal: to fashion 30,000 Legos into a 4 foot x 3 foot x 2 foot Lego  replica of Cummins new high-horsepower diesel engine, the QSK95.

Introduced in Novemeber of 2011, the QSK95 is a 16-cylinder high-speed engine built for locomotives, mine trucks, offshore platforms, power generation and marine vessels. With an output of more than 4,000 horsepower, Cummins calls it “the world’s most powerful high-speed diesel engine.”

STEM curriculum focuses on fundamental problem-solving and critical-thinking skills. Cummins designed the project to connect the company’s engineers with STEM students and their families to encourage them in continuing their STEM education.

The Lego engine will be made up of 40 different modules of the tiny bricks. Students and their families will also have the opportunity to create their own Lego sculptures.

In a statement, Richard Whitney, global employment brand leader at Cummins, said the engine will also be built at Cummins headquarters in Columbus, Ind., as well as on college campuses and at diversity career fairs throughout the year.