The kind of engine you get in equipment for the next few years will depend on a complex matrix of credits the EPA offers to OEMs.

While the compliance dates for Tier 4 Final engines are staggered from 2008 to 2015, the majority of the engines used in off-road construction equipment will receive Tier 4 Interim engines this year. And in just two years every diesel engine less than 750 horsepower will have to meet Tier 4 Final standards … except those that don’t have to. 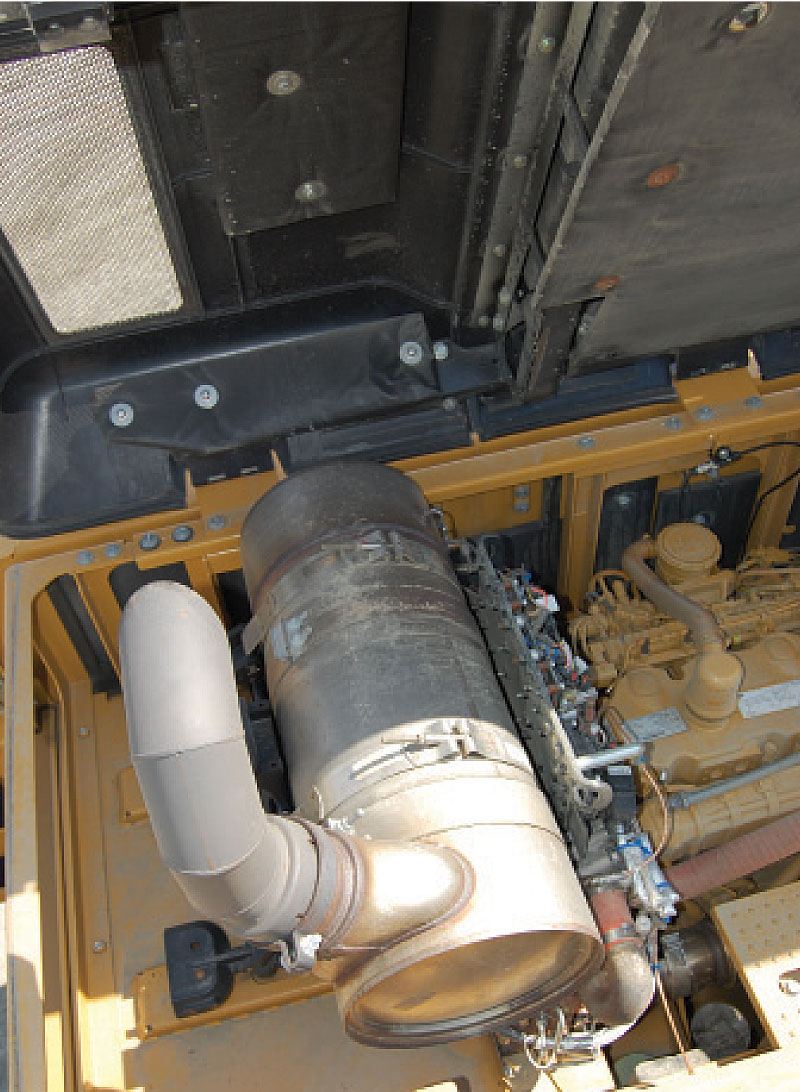 The diesel particulate filter is a new and essential component for reducing exhaust emissions but requires additional maintenance.

Unlike on-road diesel engines, most of which all had to meet a new emissions spec on the first day of the year in 2007 and again in 2010, emissions compliant off-road diesels are being phased in by different horsepower bands at different times. (See the chart below.) But, not all engines from all manufacturers have to hit these goals.

Engine manufacturers that did a good job meeting or exceeding emissions targets for earlier tiers of engines received credits, sometimes called flex credits, from the EPA that enabled them to delay implementation of their Tier 4 Interim and Tier 4 Final engines.

“The EPA’s average banking and trading program for engine emission credits is one of the most complex federal regulations ever in terms of implementation,” says Kevin Kokrda, executive vice president, Engine Manufacturer’s Association. There are people in the engine and OEM world who have based substantial portions of their careers calculating all the permutations of these credits, he says.

Despite the complexity, the flex credit system works out to everybody’s advantage, especially given the huge variety of off-road engines. “It gives manufacturers a smooth way to transition into the engine changes so they don’t have to do everything on January 1,” Kokrda, says. “That would be a big burden from a manufacturing standpoint.” The flex credit system achieves the goals the EPA wants, reducing diesel exhaust emissions by a certain amount by a certain date, while still giving manufacturers options on how to meet those goals.

“Everybody is getting cleaner,” Kokrda says. “There are no laggards. There are incentives built into the program for manufacturers to use the credits in a timely manner, but they can still do what makes sense for their customers and product lines. The federal government was astute in writing these flexibility programs early on.”

What’s under the hood?

For now, equipment OEMs are being tight lipped about their plans for using these credits. You can find out, but you may have to ask. Some machines will have the new emissions technology, and some won’t. Some will be tweaked and some will undergo complete redesigns.

By virtue of the flex credit system OEMs can truthfully say that a certain machine or engine meets the Tier 4 Interim or Tier 4 Final standard, even if it hasn’t changed at all from a previous tier. To find out, ask these two questions of your OEM or dealer regarding their emissions technology:

• What emissions reduction technology is built into the engine on this machine?

• What impact will this technology have on price, performance and maintenance?

Equipment World has written about this technology and its impact on performance and maintenance in previous issues. You’ll find those articles listed in the Recommended Reading box on the opposite page. (Or go to this article on equipmentworld.com/digital and click on the active links).

But here in a nutshell is what you should be paying attention to:

• The biggest change you’re likely to see is the addition of a diesel particulate filter that will scrub particulate matter out of the exhaust stream. These filters periodically purge themselves of the trapped PM, but over time ash from the engine’s lube oil will accumulate and require cleaning. For engines equipped with diesel particulate filters, expect an ash cleanout procedure at around 4,500 hours for engines greater than 174 horsepower and 3,000 hours for engines 173 horsepower and below.

• You must use ultra low sulfur diesel fuel and low-ash lube oil (designated with the American Petroleum Institute’s CJ-4 certification) to prevent premature clogging of your DPF.

• Many engines will increase the amount of exhaust gas recirculation and generate more heat. In addition to larger cooling packages, many of these will come with new extended life coolants as the factory fill. These new ELCs form a much thinner coating on the inside of your radiator surfaces and hence do a better job of radiating heat out to the atmosphere. Just don’t make the mistake of putting conventional coolant in these machines and negating all the positive effects of the original ELCs.

• Pay attention to the quality of your fuel. Most of these machines are common rail, high- pressure injection with multiple injection events. The openings in the injectors are too small to tolerate much water or debris in the fuel.

Costs and other considerations

The machines that get the new technology will see price increases. Again, the OEMs are playing this one close to the vest, but most industry observers think that overall machine prices will increase anywhere from 5 to 15 percent. A lot of these will be model changes with significant other upgrades and improvements, but most of the increase will be to cover the costs of the emissions technology development and implementation. When you consider that an engine is roughly 10 percent of a machine’s cost, that means in some cases the price of the engine is more or less doubling.

“If the fuel savings and improvements help offset the increase in cost, that will be a benefit, but I’m somewhat skeptical of that,” says Robert Merritt, CEM, director of maintenance at URS, Boise, Idaho, a large construction services firm.

Maintenance for the new exhaust emissions systems is also presenting new challenges. “The field technicians have difficulty diagnosing problems today, much less new technology,” says Ron Sharp, equipment manager at Armstrong Coal, Madisonville, Kentucky. “Dealers will have to increase training above the levels we have today, and that only adds cost.”

Both men say the emergence of the new technology will change how they look at equipment lifecycles and acquisition strategies. “We will retain equipment longer and strongly consider pre-Tier 4 equipment says,” Sharp says.

Dan Samford, vice president of corporate equipment at St. Joseph, Missouri-based Herzog Contracting, accepts the inevitability of emissions compliant equipment, but says when the lifecycle allows it he may also hang on to older equipment longer than before. He anticipates a few bugs being worked out in the first few years and plans to rely on dealer and OEM for some maintenance and technical assistance. EW