Oil Analysis: Why it’s the best way to tell if your engine is healthy 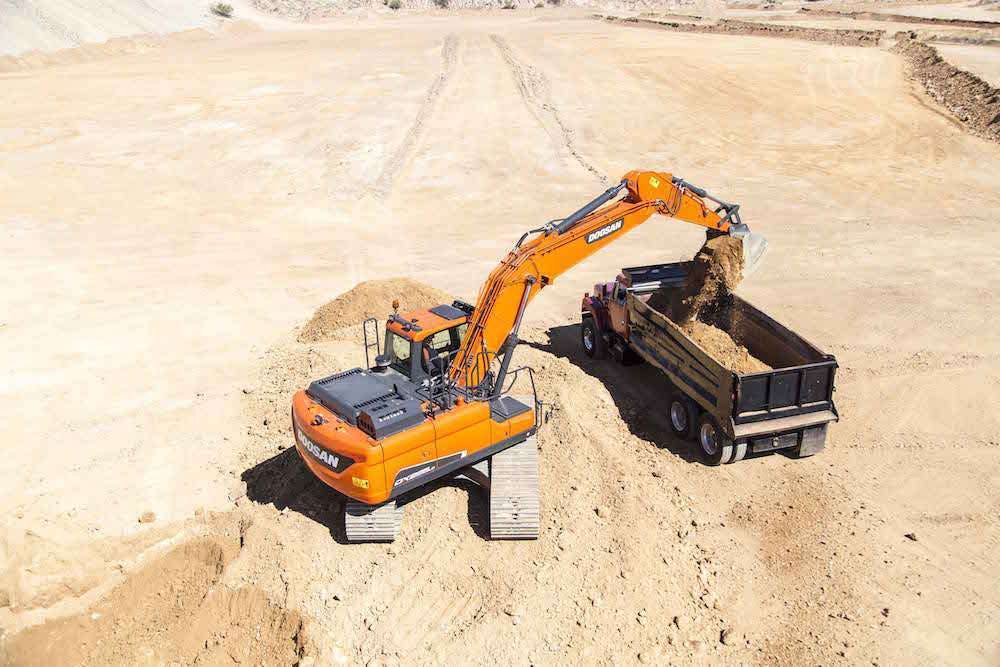 Oil analysis and lubrication experts at Noria Corporation cite several “illnesses” that can be detected from oil analysis:

• A spike in iron and aluminum levels warn of piston and cylinder wear before a major failure.

• Bearing wear rates can be determined before the crankshaft becomes badly scored.

• Fuel dilution, coolant leaks and water contamination can be detected before they become major problems.

And it’s not just engine oils. Noria also emphasizes the importance of analyzing routine oil samples in hydraulic systems, transmissions, gearboxes, differentials and other non-combustion lubricated systems. These may include: 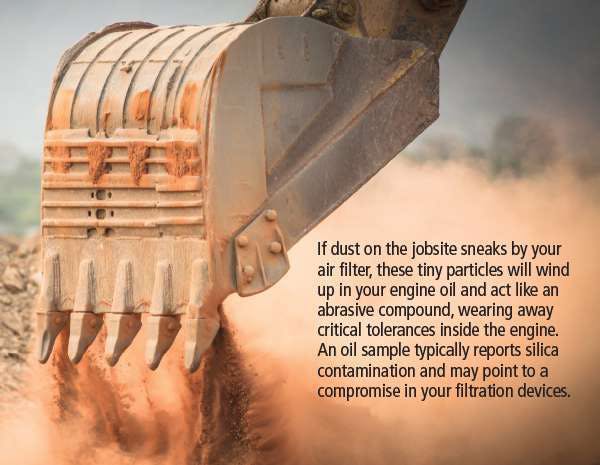 Oil analysis is also critical to determine proper oil drain and filter change intervals in all types of engines and equipment. Many parameters are vital to proper oil analysis interpretation, including:

• Hours or miles of service

This information should be printed on a card usually provided in the oil sample carton, with oil samples taken at regular intervals. As with any mechanical system, it should reach its operating temperature before the sample is taken, to ensure the sample has completed full-system circulation. In addition, the sample should always be taken from the same place in the system, such as a pre-filter, valve-mounted oil return line.

From the air into your engine

“Perhaps the biggest engine killer is external contamination in the form of dust and dirt sucked into the engine each minute of operation through the air intake. Particle contamination can be lethal for engines – even microscopic particles no bigger than a red blood cell can result in a significant reduction in an engine’s life expectancy.”

Barnes added that many engine OEMs, like GM and Cummins, have proven that particles smaller than 10 microns are three times more likely to cause wear in critical piston rings and bearings than larger particles (see Diagram 1). These particles – a tenth of the size of a human hair – can easily pass through the air filter into the engine air intake manifold.

According to John Baker at Amsoil, “Motor oil deteriorates and becomes unfit for service due to accumulation of contaminants in the oil and chemical changes (additive depletion and oxidation) in the oil itself.” He points out the various contaminates and their sources in the AMSOIL.com Blog:

• Dust and dirt. They can infiltrate engines via air cleaners, oil fill caps and crankcase ventilation systems. Proper engine maintenance is required to minimize the number of contaminants entering the lubrication system and extend engine life.

• Metal particles from normal engine wear, as well as road dust particles and dirt. These can be picked up and circulated through the engine by oil and cannot be entirely removed by oil filters.

• Water vapor and steam produced by combustion when engine temperatures are high. They exit through the exhaust, condense into liquid at low engine temperatures, such as startup, warm-up and short trips, and enter the crankcase oil, leading to sludge and corrosion.

• Acids produced through the combustion process. They find their way into the crankcase oil, combine with water and lead to corrosion.

• Soot and carbon. They are produced via incomplete combustion when engines are running too “rich” or with too much fuel and increase contaminant levels.

• Fuel dilution that decreases oil strength and increases oil consumption when an engine is started or running abnormally. This results in unburned fuel deposits on the cylinder wall. This leaks past the rings and into the crankcase, where it reduces oil viscosity and can be a significant problem in vehicles consistently used for short trips.

With reciprocating and sliding components, lubrication is a vital fluid to engine efficiency and longevity. Like blood, lubrication does not have infinite shelf life. Most lubricants have recommended shelf lives based largely upon the lubricant’s additives. For example, lubricants containing rust inhibitors may lose performance after as little as six months in storage due to additive degradation.

On the other hand, some lubricants with a light additive amount may be kept for up to three years. Shelf-life information is available from lubricant suppliers and manufacturers.

Brian Young, Baker’s equipment division director, has strong opinions on oil analysis and other contamination control processes. “Everyone, from the single owner-operator to the fleet manager, must have standardized oil sampling procedures and practices in place,” Young says. That requires more than just “check box maintenance.”

“If you can’t understand the readings, get training,” he says. “If your oil analysis company isn’t helping read the sample, change labs. There is no sense in sampling if you don’t use the results. Additionally, if you understand the importance of sampling and can read a sample, don’t neglect the filter. You need to look for the sparkle, which could indicate early failure and not just normal wear and oil degradation.”

Evidence of Baker Rock’s belief in oil testing, analysis and preventive maintenance goes beyond their awards. The company has achieved an unplanned emergency rate that tracks between 1.5 and 2 percent throughout their season for one of the largest quarries in the state. And the company has several real-world examples in which using oil analysis resulted in significant savings or avoided costly downtime.

Extended oil change intervals: Analysis on a machine showed that the expected oil degradation, additive package depletion, contaminants and loss of lubrication were not happening at the manufacturer-recommended oil change intervals. The company reasoned that if the oil did not have any of these problems and met OEM specifications, there was no reason to change it.

By continuing to faithfully sample and inspect the machine every 250 hours, the company safely extended the oil usage to 1,658 hours, which is equivalent to seven oil changes under the 250-hour OEM standard. The result was a savings of 20 hours of labor and 224 quarts of oil. The company applied these findings across several assets, generating robust savings.

copper and iron levels. Further ongoing monitoring revealed that the levels continued to climb while the physical/chemical counts began to elevate in oxidation, nitration and sulfation.

By correlating this data with fuel burn, the company concluded the engine was wearing out. This allowed them to take the truck out of service at a time of their choosing for a rebuild before wear required the replacement of major components, or a ventilated block.

Avoiding key machine downtime: Recurring high heat was recorded on a stationary hydraulic system. It was detected through thermography on a major bearing. The company could not risk a major failure due to this being a primary asset with no backup available. Oil analysis indicated no component failure, but cutting the filter open revealed sparkle from metal particles on the bearing surfaces starting to spall. An even more significant detrimental finding included heavy fibers from a shop rag plugging the filter and restricting the oil flow and filtration capabilities. 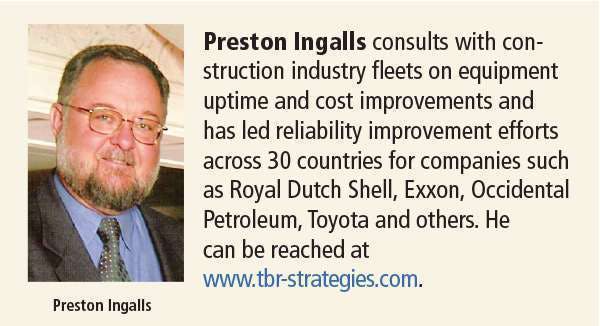 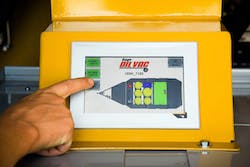 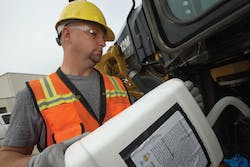 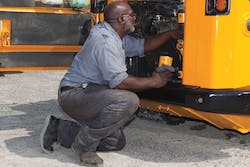 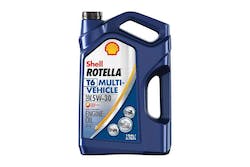