At the Intermat show in Paris Tuesday, Cummins discussed what the pending Stage V regulations will require in Europe and what similar regulations, if they occur, will do for engine diesel emissions regulations in the United States.

For Stage V, European regulators are trying to get rid of ultra-fine particulate matter in diesel exhaust, particles less than 100 nanometers in size. “The United States EPA has not given any indication yet as to their interest in a similar Tier 5 solution, but they may later,” said Richard Payne, off-highway regulatory affairs director for Europe. California, however is watching these developments closely he added.

Other than the new particle size regulation, the possible Stage 5 regulations have some significant differences from the regulatory regimes that guided Tier 3 through Tier 4 final (European Stage III and IV). Payne noted that all these items are still under discussion and that a lot of political, legal and technical wrangling is still to come.

Previous regulations exempted engines under 19 kW (24 horsepower). The new regs would likely cover all engines regardless of power. Past regs also only covered diesel fueled vehicles, but the new rules may also encompass all fuels including natural gas, gasoline dual fueled engines. Flex credit programs and transitional engine rules would also be restricted as would repowering options. Once the details have been ironed out, the Stage V regulations would take effect in 2019 for engines 0 to 55 kW (74 horsepower) and in 2020 for engines 56 to 129 kW (75 to 172 horsepower).

“The engine industry is generally happy with the dates and the regulations,” Payne said. The exception would be the rules for engine replacements and which if inacted, would be financially difficult for small firms wanting to repower older machines.

Advocacy groups and non-governmental organizations are also weighing in with their wish lists, Payne said. One such request is to lower the NOx limits on smaller engines.

The good news is that the Stage V regulations aren’t nearly as difficult to meet as were all other previous regulations. The ultra-fine particles can be cleaned out of the exhaust stream with a DPF. Payne even described the company’s current engines with DPFs as “Stage V capable.”

But this raises a thorny question. Since the advent of Tier 4 Final emissions regulations, many OEMs and engine manufacturers have created DPF-free engines, especially in the smaller horsepower bands. DPF-free engines have a smaller footprint, don’t need regeneration cycles and cost less. When manufacturers can, they almost always avoid having to plumb a DPF into their exhaust stream.

So does Stage V, possible Tier 5, mean the end of the DPF-free era? If the regulations proceed on the path they’re taking now, in all likelihood, the answer is yes. That’s not the end of the world, but it does mean that compact equipment like skid steers and even many backhoes may have to incorporate the DPF, a technology they have avoided thus far.

Cummins also gave us a sneak peak at their Stage V solution. The EcoFit Single Module, is a “single can” design, combining a DPF, DOC and SCR in one unit.

Previous Cummins designs put the SCR hardware in a separate component downstream from the DPF and DOC. The EcoFit Single Module is designed for heavy-duty and midrange engine applications, is up to 60-percent smaller and 40-percent lighter and has 20 percent less backpressure compared to today’s combined SCR and DPF systems, says Jane Beaman, off-highway commercial leader.

The urea dosing mechanism in the EcoFit creates smaller droplets of fluid which enabled Cummins to shrink the size of the module and fit it into the one canister, Beaman said. And where as most exhaust emissions add-ons to engines have been considered a necessary evil, Beaman says the smaller, lighter nature of the EcoFit module may actually make it desirable for customers regardless of future regulations or restriction. 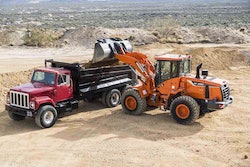 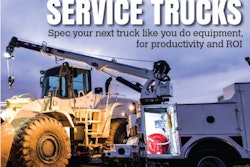