With the recession a distant memory, contactors are buying new equipment again and one of the categories of equipment to benefit from the recovering economy is service trucks.

There’s more confidence in the economy today and contractors are putting more hours on their trucks, says Brian Heffron, product specialist at Palfinger. “With new private and public construction contracts being awarded, it’s showing a positive impact through all levels of the supply chain,” he says.

A lot has changed in the last half decade or so, in terms of the new designs and technology contractors are asking for in today’s service trucks. Here’s what’s trending.

“One of the fastest growing trends is using auxiliary power units (APUs) to operate the service body and equipment such as hydraulic cranes, air compressors, and electrical and welding power,” says Tom Wibben, sales and service manager at Maintainer. APUs take their power from a separate diesel engine that is smaller than the trucks primary engine, reducing fuel consumption and maintenance cost on the chassis engine.

Anti-idling laws are also a driver behind the increasing popularity of APUs, says Brian Richards, manager interactive marketing and communications at Knapheide. With APUs you can turn the chassis engine off and still have all the tools you need to work without running afoul of the law. “Most of the systems today feature a Tier 4 compliant engine,” he says.

Terry Cook, product manager of commercial products at IMT sees a trend toward more frequent use of compressor/welder/generator combination units on service trucks. And many of these, are also using self-contained diesel powered units to provide hydraulic power to their cranes, he says.

While there are more trucks being upfitted with APU’s, the jury is still out on their ROI, says Tim Davison, product manager at Stellar. “Although these units use less fuel, we believe the break even point is still a theoretical discussion, rather than empirical data,” he says. “Time will tell whether the move to all-in-ones really add to the bottom line for customers.”

The bigger fleets are sensitive to weight issues, says Eric McNally, vice president of sales at Reading. Using aluminum for the service body can cut the weight almost in half, he says. That means a Ford F-250 can stay under 10,000 pounds gross vehicle weight rating and avoid all the DOT licensing and complications that go with trucks heavier than that.

Maintainer is also offering aluminum service body components. “With higher fuel costs there has been a need to provide a lightweight service truck for increased payload while reducing fuel costs,” says Wibben. Aluminum’s other big advantage is that it is corrosion resistant, he says.

As business levels have picked up there has been a trend toward larger trucks, says Cook. Some of this is driven by the availability of funds for capital expenditures, while in other cases payload or crane capacity is the driver.

Richards sees a lot of attention being paid to spec’ing the right size of truck. After the economy tanked in 2008 many contractors and fleet managers started paying close attention to the acquisition costs and applications for the truck. Too small a truck hurt productivity, while too large a truck created a longer payback period. Both mistakes can hurt ROI.

A lot of companies try to do more with less, Heffron says, but that can get expensive if you load the truck up with auxiliary equipment.  So upsizing to a truck with a 26,000 GVWR may make more sense than going to the edge of your capacity with a 19,500 GVWR truck. And 26,000 GVWR still allows you to use a driver without a commercial driver’s license (CDL), he says.

Lifecycle costs factor into many contractors’ decisions, says Heffron. “They want a product that’s going to last for their planned usage and environment and still have value when it’s time to replace it.” And spec’ing a truck that a mechanic will enjoy spending his days in is also increasingly important, he says. This helps companies attract and retain qualified people.

Customers are asking for a stronger fleet management approach to crane control systems and diagnostics, says Davison. This requires more advanced diagnostic and operator feedback, he says. Operators want to know more about what their lifting is doing and how the equipment is performing, he says.

Longer reach cranes are also becoming a staple of the customer’s needs, says Heffron, as well as cranes that operate with wireless controls.

Our experts gave different answers to the question of storing diesel exhaust fluid (DEF) on service trucks. Some are seeing it. Some are not. On mechanics trucks, DEF storage seems to be rare, but on the larger lube and fuel/lube trucks, more contractors are requesting it.

“DEF has become a common product to carry on our lube trucks now that much of the equipment being serviced is equipped with those systems,” says Wibben. He also notes that the fluid presents challenges and requires specialized equipment in that it is corrosive and has the potential to freeze in cold temperatures. That means stainless steel components and heating systems to keep the fluid from freezing.

Since many equipment manufacturers size their DEF tanks to be refilled every time you refill with diesel fuel, DEF storage is becoming increasingly prevalent on fuel trucks. 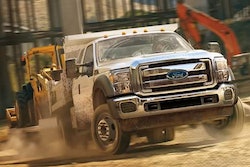 Why asphalt is still the King of Paving 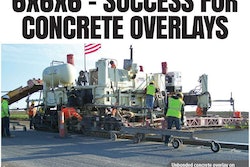