From Mill to Mat: Watch a Demo of BOMAG Paving Trains

BOMAG is well-known in the U.S. for its asphalt and soil compactors, but when it comes to cold planers and pavers, not as much.

The 65-year-old company based in Germany hopes to change that as it places a greater emphasis on its complete roadbuilding product line, which covers everything from milling to mats. During its recent Innovations Days event at its North American paver plant and headquarters in Ridgeway, South Carolina, the company showed customers and prospective dealers its full range of roadbuilding products.

(To watch BOMAG’s paving train demonstrations from the event – 11 products in action, including its new flagship, the half-lane cold planer BM 2200/65 – check out the video above.)

The company already has been making deeper inroads into North America. Rolf Junker, president of BOMAG, reported that the combined U.S.-Canada market has grown from one-fourth of the company’s overall revenue to one-third, as of this year.

“It is the by far fastest-growing market for us … and therefore very, very important,” he said.

That’s why you’ll likely being hearing a lot more from BOMAG – and a greater emphasis on equipment beyond its rollers.

“I feel like BOMAG is very well-known for compaction,” said Cole Renken, vice president sales and marketing. “But we are not as well known – part of it is we have not been in it as long – for the asphalt paving and milling side of it.”

To change that the company’s North American arm created a team of paving and milling experts about a year ago. “We've got business development managers; we've got product specialists; we have service specialists just focused on milling and paving every day,” said Chris Colwell, vice president of milling and paving, who heads up the team.

The company’s cold planers have undergone redesigns and upgrades over the past two years. And earlier this year, it unveiled its new flagship milling machine, the half-lane BM 2200/65. “This is a game changer in the industry,” Colwell said. “…This is a full ground-up design.”

The company has also upgraded and released new paver models in recent years, including its BF 200, which can handle small paving tasks, such as paths, and inside of trenches up to 4 feet wide. BOMAG’s larger pavers are based on the Cedarrapids paver line it purchased from Terex in 2013 and moved production to South Carolina, where it produces pavers for municipal, commercial and highway operations.

Even lesser known in the U.S. are the stabilizers, spreaders, sweepers and other roadbuilding products that either BOMAG or its sister companies produce. BOMAG is part of the France-based Fayat Group’s Road Equipment Division, which also includes Dynapac and multiple other brands.

“The strategy and the idea of the Road Equipment Division is to have each and every equipment which you need to have for the life cycle of the road,” Junker said.

And at Innovation Days the company proved that was the case, showing a series of demonstrations that covered the main equipment ingredients for making an asphalt surface.

All of this additional emphasis on paving and milling and the other products does not mean BOMAG plans to let its top U.S. product category languish. The company has launched a next-generation hybrid split-drum, pivot-steer roller in the BW 174 AP-5 AM and also has plans to unveil a battery-powered tandem roller at this month’s Bauma show in Germany.

President of BOMAG Americas, Ron Mueckler, noted that 100% of its revenue comes from asphalt equipment.

“We don't have wheel loaders to fall back on – excavators, skid steer loaders,” he said. “We have to live, eat and breathe asphalt, or we can’t feed our families. … We're going to be here well in the future and continue to get better.”

Demonstrated equipment in the video at the top of this story: 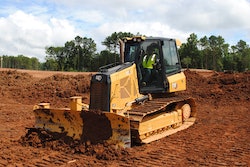 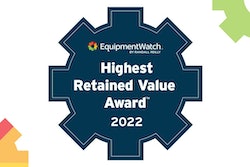 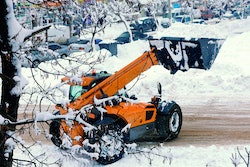 BKT's New Tire for Equipment in Snow and Ice, the Multimax MP 538