Hiab plans to bring 3D virtual-reality crane operation to the United States in 2019. Operators don VR goggles and don’t have to leave the truck’s cab, which increases safety and allows comfortable operation in all weather conditions and at night, the company says.

Virtual reality has emerged in the construction industry as a training tool for crane operations, but Hiab is the first to add VR to actual crane operation. The product debuted in April 2016 at the Bauma exhibition in Germany.

The truck-mounted crane manufacturer has reported success with its European launch of VR goggle-operation, called HiVision, for its Loglift and Jonesered brand forestry cranes.

“Loglift is being incorporated into our 2019 model lineup here in the U.S.,” Quinn tells Equipment World. “That will be kind of the pioneering product for bringing this technology to our customers in the U.S. And then our Hiab crane loader line will also have that feature incorporated as an option also beginning with models that will be launched in 2019.”

Since its European launch, Hiab reports it has seen increased sales, as well as won awards for the VR product. The Sweden-based company specializes in on-road truck-mounted loader and articulated cranes, truck-mounted forklifts, hook lifts and skip loaders. Along with Hiab, brand names include Moffett, Multilift, Zepro, Del and Waltco.

The HiVision system allows operators to run the cranes from the cab while wearing virtual reality goggles. The goggles reveal views from four cameras that provide a 270-degree view of the work area. Hiab says the goggles increase safety and improve operator comfort.

“For us, the development of HiVision was all about improving the work environment and safety of operators. In addition, we sought productivity benefits that would bring financial savings to our customers’ businesses,” says Toni Ahvenlampi, product manager HiVision, forestry and recycling cranes. “This solution was radical, but we believed in it because it provided an opportunity to move the operator from a risk environment to the safest and most comfortable work environment during loading, which is the truck cabin. Besides, the weight savings offered the chance to add more payload.”

The four cameras are mounted atop the crane giving a view of the work area.

“In a traditional crane, the operator needs a 240-degree field of view to see that no one approaches the crane from the side,” says Rafal Sornek, vice president, Hiab Technology and Quality Development. “That’s why we decided on four cameras.”

When the HiVision operator turns his head, the goggle image switches from two forward-looking cameras to two looking sideways. “This provides a very realistic view, without moving parts on top of the crane,” the company says. “The cameras are fixed in a relatively small box placed where the operator’s head would normally be.”

Check out this video of HiVision in action:

Quinn says Hiab has heard interest from its U.S. customers about HiVision, without the company having done any marketing in this country. U.S. customers interested in the VR product have been in construction, roofing, lumber and drywall applications in which mid-range cranes are used.

“We’ve come out with this feature in Europe in a really big way and so we haven’t done any proactive marketing of this feature or its future availability in the U.S.,” she says. “All the interest that we’ve gathered from our customers has been completely organic.”

For now, Hiab views HiVision as a way to improve safety and operator comfort, but it also has a long-term VR goal.

“In the future the operator doesn’t even have to be in the truck, but operates remotely from a distance, saving costs,” says Sornek. “I’m a strong believer that we rather soon will have driverless trucks on the roads, and it makes no sense to have crane operators sitting on these waiting passively to get to the site. One person could even operate several trucks remotely.”

He believes this would also add jobs. “You don’t necessarily need a truck-driving license, and it could be a perfect job for disabled people,” he explains.

Stricter regulations could also lead to more acceptance of VR systems and could even become compulsory and replace unprotected top seats, he says.

“We want to be the safety forerunner in our industry,” he says, “complying with regulations even before they become the actual law.” 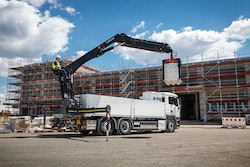 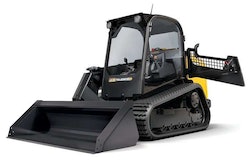 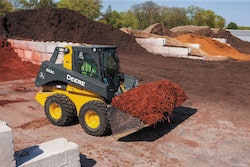 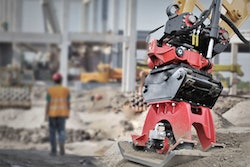