Off to one side at Deere’s ConExpo booth, attendees were asked to don a set of virtual reality goggles to get a glimpse of Deere’s vision of what a backhoe might look like in 10 or more years.

Dubbed “Fixstern”—which is German for “fixed star”—the project behind the VR experience is the creation of Deere and Designworks, a BMW Group subsidiary. The terminology is designed to convey a “far-future vision or focal point” that everyone can align to and drive towards, Deere says.

Robert Moore with Deere sat down with Equipment World at the show to go over how Deere sees the Fixstern Backhoe project unfolding. “This is really a next-decade-plus process,” he says. “And while it defines where we want to be in more than a decade from now, in going toward that vision we can take small pieces of it and bring those to the present to apply to our product lines.”

One of the driving visions of the Fixstern is fulfilling a perpetual backhoe customer request: gaining more cab space, so that there’s no danger of the typical knee knock when an operator transitions from loader to backhoe and back again.

“What gets in the way is the size of the large rear tire, and up until this set of ideas we haven’t been able to change that,” Moore says. In the Fixstern concept, Deere is using four equal-sized airless radial tires and increasing the length of the wheel base. Stabilizers have been moved from behind the rear wheels to in front of them. A hybrid diesel-electric drive train helps lower the center the gravity and reduce the weight of the machine.

In addition, the Fixstern has a lightweight metal matrixed exoskeleton design, meaning that the structural frame components are pushed to the outside.

“All of this gave us all kinds of space, with increased visibility and operator rotational room,” Moore says. The isolation of the seat and controls from the now-structural ROPS improves comfort and control while reducing vibration and noise, and electric four-wheel steering improves maneuverability in tight spaces, Deere says. This also increases space for interior storage and option configurations.

The concept machine has a backhoe that can be put in either a center mount or side shift position. A “tuck” feature, which allows the boom to position sideways from the backhoe body, minimizes the overall length of the machine.

The Deere/Designworks team established several goals for the project, according to Deere:

♦  Reducing the machine’s weight by 20 percent

♦  Lowering the cost to manufacture.

Moore calls Deere’s Fixstern weight and fuel reduction goals “very aggressive.” “We know how we will begin to approach them, but right now there isn’t a clear-cut answer and there certainly isn’t an industry precedent for how they will be implemented. So the ink isn’t dry.”

Deere chose the backhoe because of its two-machines-in-one composition, Moore says. Insights gained from the front-end loader can be applied to wheel loaders and skid steers, for example; those from the rear backhoe can also be applied to excavators. And cab and body improvements can be implemented in a variety of machines.

Designworks says it applied its “proprietary database of emerging materials, fabrication techniques and technologies” to the Fixstern Backhoe project. According to the studio, the concept backhoe would be manufactured with “intelligent, emerging, lightweight materials, which help reduce dig component weight and translate directly into increased payloads.”

Moore says that ConExpo attendees who put on the Fixstern VR goggles loved the visibility, but there were drawbacks as to what could be experienced at the show: “We couldn’t put them in a full VR rig, which is where we would get some great feedback.”

Moore says Deere is interested in seeing how a far-future machine concept can influence today’s product. “Some of the pieces we’re pulling in are going in very different directions than a backhoe,” he says.

Deere shared with Equipment World the video presentations it used in its ConExpo booth that show the different areas the Fixstern project is exploring. (No, your sound is not off; these videos have no sound since they were created for the noisy show environment.) 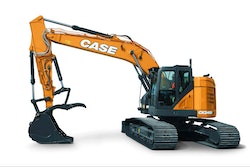 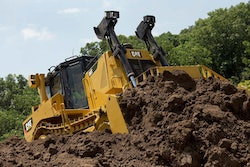 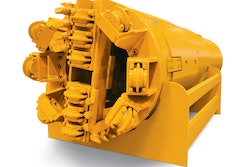 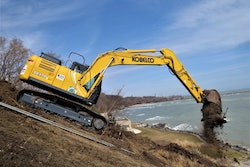