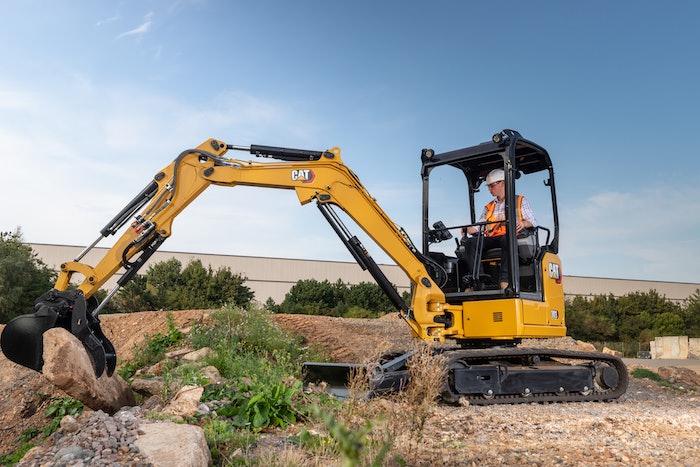 “These three machines are all within one ton of each other, but they're all very different,” says Greg Worley, Cat market professional.

Some up-front differences: The 302.7 has an expandable undercarriage, the 303 received enhanced lifting performance, and the 303.5 now has a standard angle blade.

“Despite their differences, all three machines bring the Next Generation features that have been such a hit on the models that have already been introduced,” says Mark Perkes, Cat product application specialist.

Cat says all three compact-radius models deliver up to 10% more travel and trenching performance compared with previous models. This is because of hydraulic system upgrades, which improve lifting performance and cycle times, and customizable operator settings.

“A big determining factor on the 302.7-size unit is access to someone's backyard.” Perkes says. “We now have the industry's first expandable undercarriage in this size of machine. And the blade extensions stay with the blade so you're not going to lose them.”

The option allows users to hydraulically retract the width of the undercarriage to 53.3 inches to fit into confined spaces and then expand it to 70.1 inches for digging and lifting stability.

Customers can also opt for interchangeable counterweight packages that add either 221 pounds or 551 pounds.

All three models offer a long-stick option. Standard digging depths range from 96.5 to 110.6 inches, and the additional reach of the long-stick option allows dig depths of 104.3 to 122.4 inches. The standard dozer blade assists with backfilling and grading tasks and has a standard float function to ease cleanup.

“Contractors using these machines put in a lot of utilities, and when they can’t fill the hole straight away, they use these 2,450-pound steel plates, which they have to move off a trailer and around the jobsite,” Worley says. “The 303 is designed to handle that kind of work.” 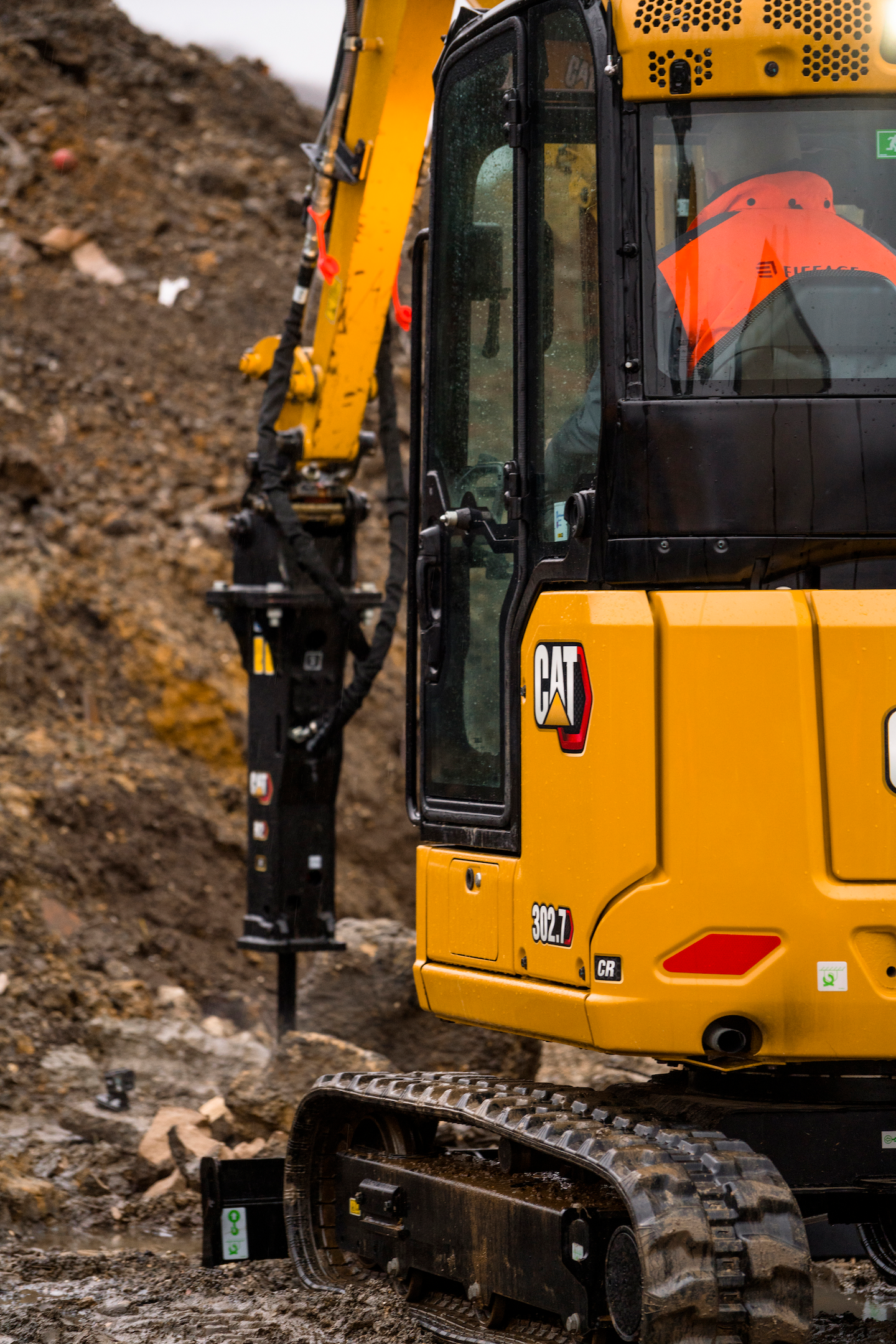 All Next Generation compact excavators have Cat Stick Steer, allowing the operator to switch from conventional lever/foot-pedal steering controls to joystick operation at the push of a button.Caterpillar

Cat says the models offer a 5% lower cost of ownership through such features as parts commonality, damage-resistant exterior, ground-level maintenance checks and a tilt-up cab for more extensive repairs.

“Our tilt-up cab and canopy has been a huge hit on our 1- and 2-ton machines, and we are bringing that to these three new models,” Perkes says. “You can fully raise it in less than 3 minutes. And the same tools used to lift the cab on Cat skid steers are used.”

The new models will feel familiar to anyone who’s operated a Cat Next Generation excavator, says Worley. “If you can operate a 336, this will seem very similar,” he says, a great feature for operators using several sizes of machines throughout the week.

All three models have several options, including an advanced touchscreen, which allows users to monitor and control machine functions, and a passcode and Bluetooth key start.

As with all Next Generation compact excavators, the new models feature the Cat Stick Steer control. At the push of a button, the operator can switch from conventional lever/foot-pedal steering controls to joystick operation. The machines have two travel ranges, with speeds reaching 2.8 mph.

“Stick steer has been a huge hit with operators, and they're able to use excavators in ways that they've never been able to use them before.,” Worley says.

The three models come in cab or canopy versions. 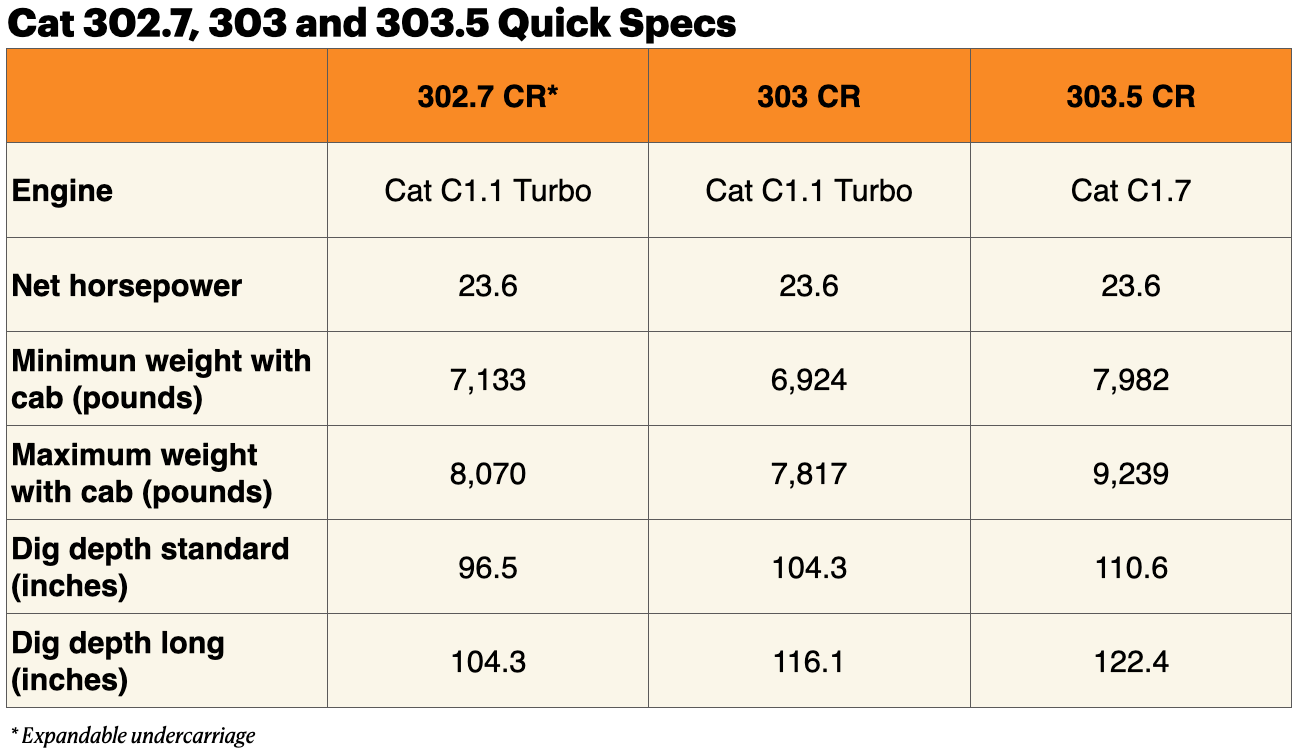