McNeilus Truck and Manufacturing has updated its Oshkosh S-Series front discharge concrete mixer with increased hauling capacity and several improvements that make the mixer easier and more comfortable to operate.

The cab has been expanded and made easier to get in and out of. It has a wider field of view with a full one-piece curved and bonded windshield with no side wing window seam.

With more than $44 billion in 2018 revenue, a spot as one of the top five automotive suppliers around the world, and a size that is double and triple some of the most well-known truck OEMs, it might sound odd to hear that ZF thinks of itself as a relatively unknown entity in North America.

And yet, it’s hard to argue the point. While some obscurity simply comes with the territory of being a supplier rather than designing and building the vehicles your technology is going into, the German company feels that its work in autonomy and Advanced Driver-Assistance Systems can no longer go unnoticed.

Volvo Construction Equipment has introduced a new excavator model aimed at contractors and rental houses looking for a machine larger than the 16-ton EC160E, but less expensive than the 22-ton EC220E.

The new EC200E is a 20-ton model that the company says is primarily designed for those in need of a light- to medium-duty excavator.

The Hennessey Maximus 1000 is powered by Dodge’s supercharged 6.2-liter Hellcat V8 that Hennessey has cranked up to 1,000 horses and 933 lb.-ft. of torque. Yeah, that’ll turn some heads at Moab, Glamis, the Jeep Jamboree, your local drag strip, your kid’s school and just about anywhere else.

Caltrans was faced with a massive dirt and rock slide in February that completely covered a section of State Route 2 in the San Gabriel Mountains in Angeles National Forest in California.

The transportation department’s conventional earthmoving equipment couldn’t work at the top of the slide, so a spider excavator, also known as a walking excavator, was brought in.

To read more and watch the video, click here. 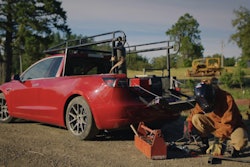 Tired of waiting on Tesla’s pickup, YouTuber makes her own 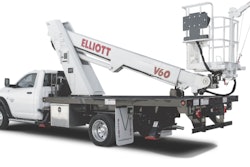 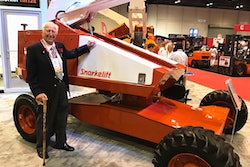