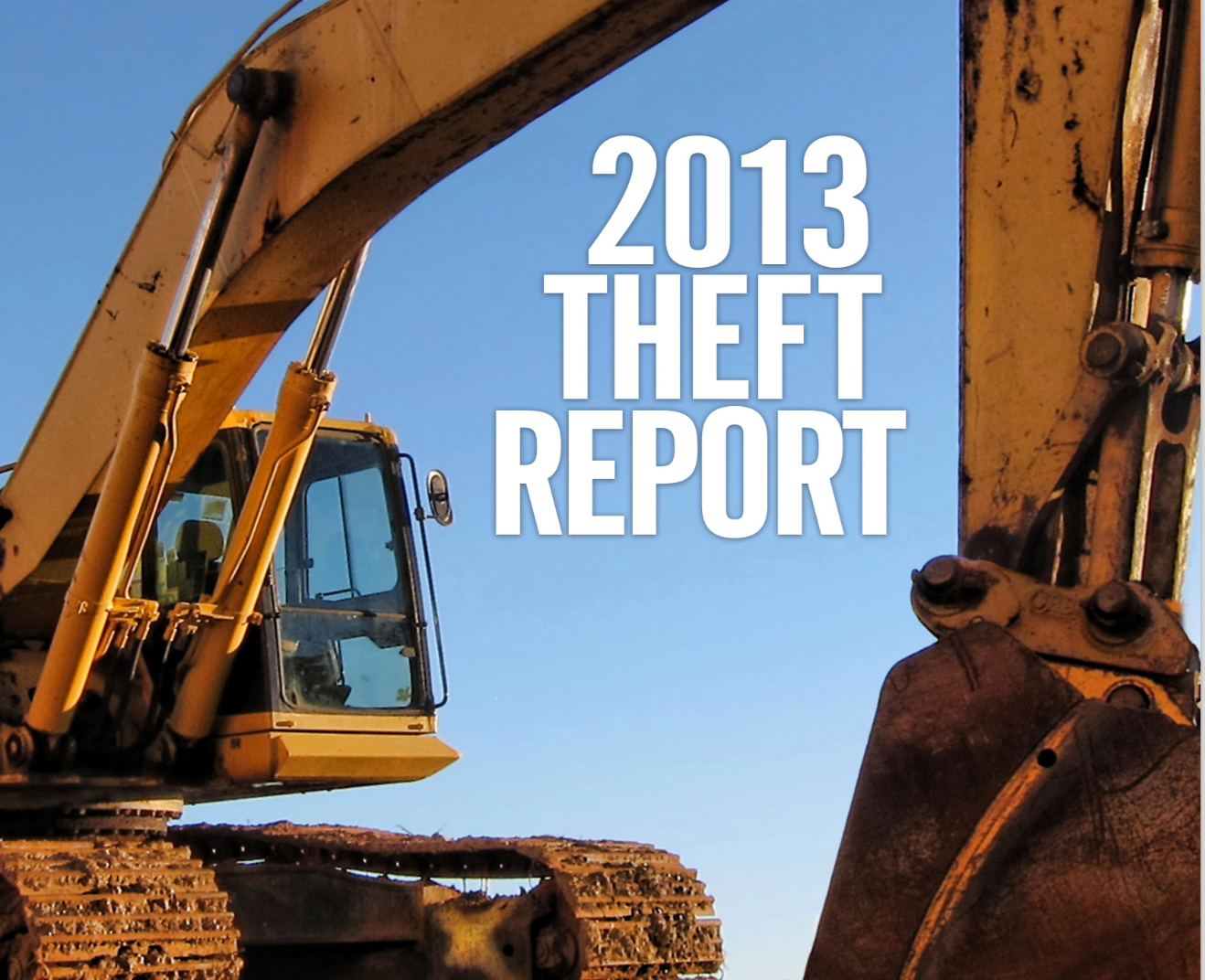 Nearly $300 million worth of construction and other heavy equipment was stolen in 2013 with only 21 percent of it recovered, according to the latest theft report from the National Insurance Crime Bureau and the National Equipment Register.

The majority of thefts occurred during the spring and summer months with August topping all other months with 1,305 thefts occurring during that month alone. Because availability is a factor in these thefts, it’s not a surprise to see the peak months for construction activity accounting for the most thefts. The least amount of thefts, 590, occurred in February. 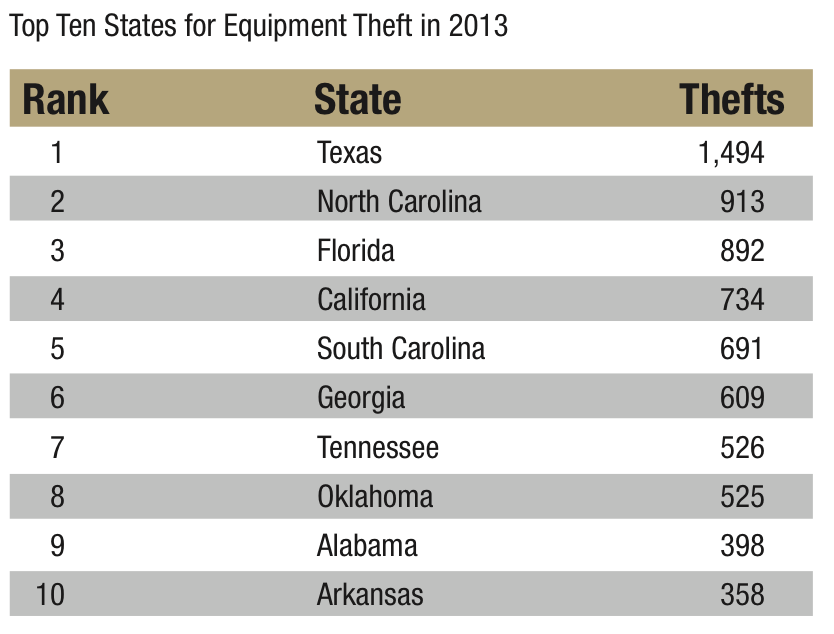 The states with the highest volume of construction and agriculture have the largest number of thefts because that’s where the most equipment is lying around. It’s in these areas that organized theft rings are likely to develop.

According to the report, value and mobility are the two main factors that most heavily determined the type of equipment thieves are most likely to steal. The report adds that most equipment is taken from the jobsite rather than from a contractor’s equipment yard.

With all of those factors considered, it’s no wonder skid steers are the no. 1 most-stolen type of construction equipment. They’re small, easy to resell and on just about every jobsite. (It also makes sense that lawn mowers are by far the most targeted machines, accounting for 45 percent of the entire report’s thefts.)

The tractor category accounted for the third-most number of thefts at 1,362 reported thefts, or 12 percent. The category is broad, including compact, utility and agricultural tractors. 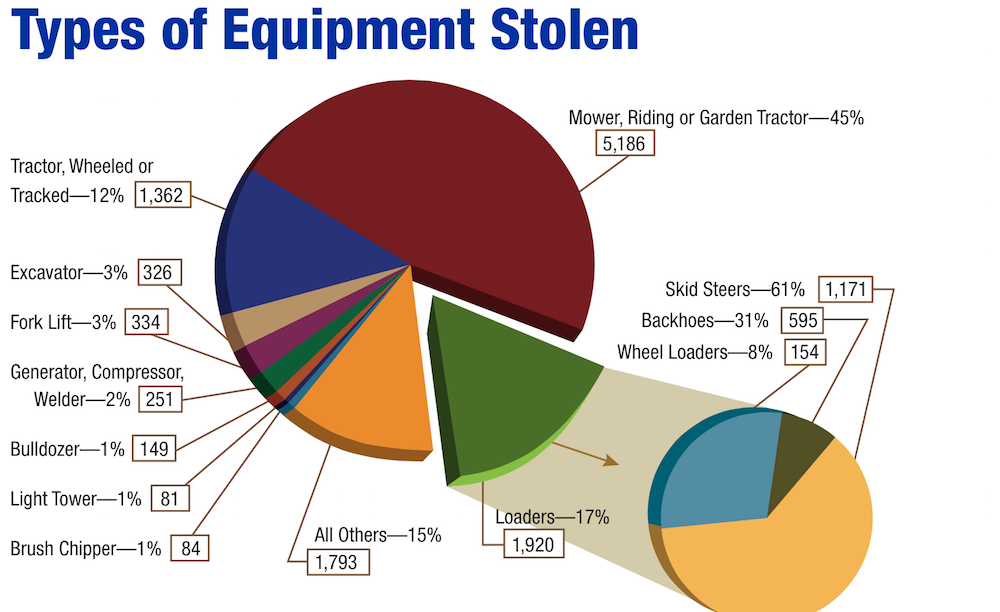 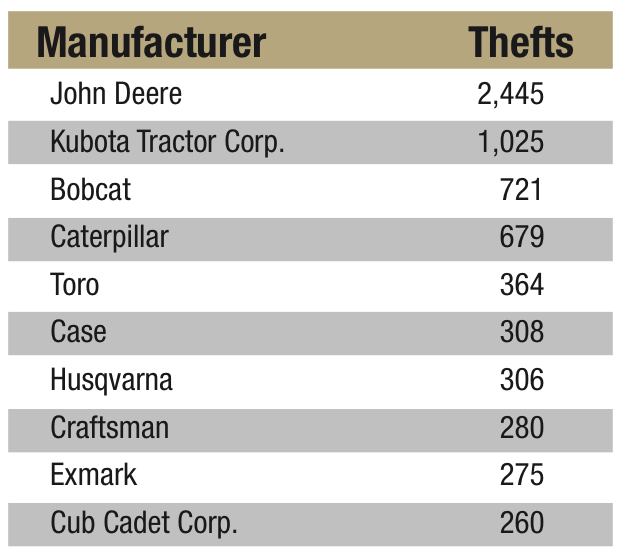 With only 21 percent of all machines stolen in 2013 recovered, a technology like telematics, which provides the location of a machine at all times, even more of a no-brainer. In addition, the report encourages equipment owners keep accurate lists of all their equipment with PIN/serial numbers and submit them to law enforcement, their insurers, and the National Equipment Register as soon they discover a theft.

“And when they purchase equipment, owners should register serial numbers in the NER database, so that the information is available to law enforcement 24 hours a day,” the report reads. “In the event of a theft, law enforcement can identify the equipment, even during weekends or at night.”

You can browse a full copy of the theft report by clicking here.